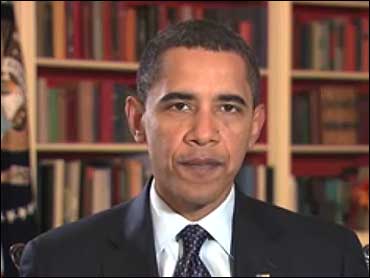 It was the latest appeal from the new president for a massive spending bill designed to inject almost $1 trillion into the economy and fulfill campaign pledges.

As lawmakers consider an $825 billion plan and Obama woos them, he used his first radio and Internet address from the White House to update the public about his goals.

"Our economy could fall $1 trillion short of its full capacity, which translates into more than $12,000 in lost income for a family of four. And we could lose a generation of potential, as more young Americans are forced to forgo college dreams or the chance to train for the jobs of the future," Obama said in a five-minute address.

"In short, if we do not act boldly and swiftly, a bad situation could become dramatically worse."

Along with the speech, Obama's economic team released a report designed to outline tangible benefits of the plan and shore up support.

Aides said they wanted people to understand exactly what they could expect if Congress supported the proposed legislation.

The United States lost 2.6 million jobs last year, the most in any single year since World War II. Manufacturing is at a 28-year low and even Obama's economists say unemployment could top 10 percent before the recession ends. One in 10 homeowners is at risk of foreclosure and the dollar continues its slide in value.

That harsh reality has dominated Obama's first days in office. He scheduled a meeting late Saturday morning with his economic team.

A day earlier, he invited Democratic and Republican leaders to the White House to hear their ideas on the economy. At that visit, he did not share the details he released Saturday.

Many of the goals in the speech and report were familiar from Obama's two-year campaign, such as shifting to electronic medical records and investing in preventive health care. Other parts added specifics.