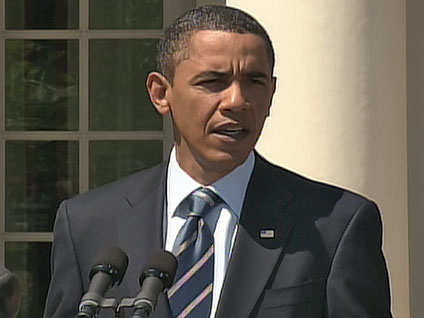 President Obama today promised a review of the massive oil spill in the Gulf of Mexico after an explosion at an oil rig.

Mr. Obama said he ordered Interior Secretary Ken Salazar to review what happened and report back within 30 days with "additional precautions and technologies" to prevent future accidents like this from happening again.

During the remarks in the White House Rose Garden, Mr. Obama sought to counteract perceptions that his administration had been slow to react to the disaster, saying that his team has been "working closely" with state and local officials since the day of the explosion last week.

He said that the federal government was "fully prepared to meet our responsibilities to any and all affected communities." Several Cabinet secretaries have already been dispatched to the scene, as well as 1,900 federal personnel and other resources. Mr. Obama also stressed that BP would be responsible for all costs related to the cleanup and said the administration is inspecting all deepwater rigs in the Gulf.

Mr. Obama added a remark on his overall domestic oil production that pointedly did not close the door to future drilling.

"I continue to believe that domestic oil production is an important part of our overall strategy for energy security, but I've always said it must be done responsibly, for the safety of our workers and our environment," he said. "The local economies and livelihoods of the people of the Gulf Coast as well as the ecology of the region are at stake."

Earlier, White House Senior Adviser David Axelrod said in an interview that no new offshore drilling would be authorized until the administration gets answers about the current spill.

"No additional drilling has been authorized, and none will until we find out what happened here and whether there was something unique and preventable here," he said on ABC.

In particular, Mr. Obama said all future leases would be required to have the safeguards included in Salazar's report on the incident.

The president made the remarks at the top of planned remarks on the economy following a report that Gross Domestic Product grew 3.2 percent in the first quarter. Mr. Obama said the economy was moving in the "right direction" but added that there was more to be done to help more unemployed Americans get jobs.