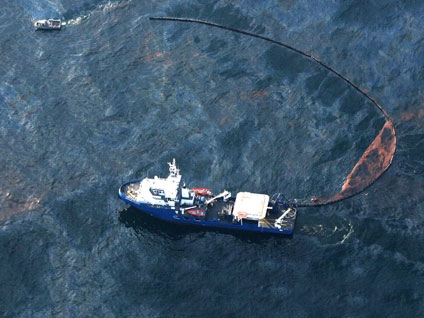 There will be no new offshore drilling until the Obama administration gets some answers about the massive oil spill in the Gulf of Mexico, White House Senior Adviser David Axelrod said today.

"No additional drilling has been authorized, and none will until we find out what happened here and whether there was something unique and preventable here," Axelrod said on ABC's "Good Morning America."

Oil is spewing into the ocean at a rate of about 210,000 gallons a day, after an oil well exploded on April 20 and sank two days later. Oil is now starting to reach the Louisiana shore in one of the worst U.S. environmental disasters in decades.

The disaster has called into question President Obama's decision to open up the southern Atlantic coastline and some other areas to offshore drilling. Democratic Sen. Bill Nelson of Florida yesterday sent a letter to Mr. Obama asking for an immediate halt to test wells and other exploratory operations in coastal waters. Nelson is drafting a bill to prohibit the Interior Department from going forward with the president's plans to expand offshore drilling.

Axelrod emphasized that Mr. Obama has not yet approved any new drilling.

"All he has said is that he is not going to continue the moratorium" on drilling, he said.

You can watch the interview below: