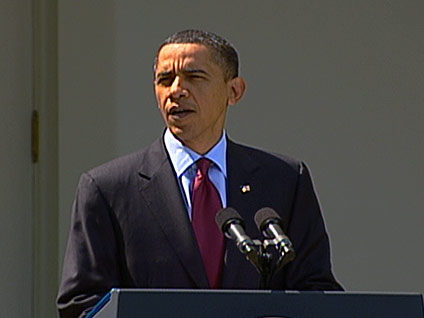 President Obama today praised Supreme Court Justice John Paul Stevens for his years of service and said he would move quickly to name a nominee to the Court with his qualities.

Choosing Supreme Court nominees is "among my most serious responsibilities as president," Mr. Obama said.

The president said he will seek out a candidate who, like Stevens, possesses "an independent mind, a record of excellence and integrity, a fierce dedication to the rule of law, and a keen understanding of how the law affects the daily lives of the American people." He praised Stevens for standing as an "impartial guardian of the law" who served the nation with "honor and humility."

Mr. Obama may be able to name a nominee relatively easily, given that he already vetted a number of people before choosing his first pick for the Court, Justice Sonia Sotomayor. The president said that, as Stevens said in a letter announcing his retirement today, "it is in the best interest of the Supreme Court to have a successor appointed and confirmed before the next term begins."

"I hope the Senate will move quickly in the coming weeks" to debate and confirm his nominee, he added.

While the White House may want to avoid a fight in the Senate over the president's candidate, Republicans have warned they are ready to stand against any nominee they consider too ideological.