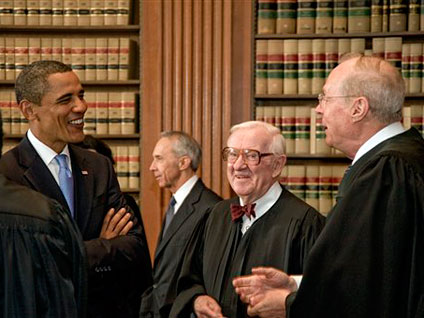 More often than not, a president's second nomination to the Supreme Court is easier than the first. If only that rookie mistakes can be avoided.

By announcing his retirement this far in advance, Justice John Paul Stevens is giving President Obama nearly six months to choose, announce and then win Senate confirmation of a successor.

Last year, Justice David Souter didn't announce his intention to step down from the high court until May 1. Mr. Obama announced his nomination of Judge Sonia Sotomayor 25 days later.

It took about two and a half months for her to win Senate confirmation on August 6, giving Sotomayor two months to prepare for the new term of the court.

The White House would be glad to have a similar timeline with its nominee to succeed Justice Stevens.

A president's second nomination to the Supreme Court is easier to choose, because the White House isn't starting from scratch. Many candidates for the post were vetted and even called in for meetings with the president on the first go-round.

The selection process is orchestrated by the White House Counsel, a post now held by Bob Bauer, who took over from Greg Craig who oversaw the vetting of candidates for Mr. Obama's first Supreme Court pick.

The overriding objective is to pick a qualified and supremely-vetted candidate. The last thing a president wants is to have surprise information about a nominee come out during the confirmation process that might embarrass the president, the nominee and possibly force a withdrawal. It's happened.

Among the candidates leftover from the Sotomayor nomination are Solicitor General Elena Kagan, and federal appeals court judges Merrick Garland and Diane Wood.

In the coming days, other names will be considered and leaked so that a president can demonstrate to various ethnic and special interest groups that a nominee from their ranks was at least considered if not selected.

Republicans have the votes to block a nomination, but that's unlikely.

Even if they did, Mr. Obama could circumvent a Senate confirmation vote by putting his Supreme Court nominee on the bench by recess appointment. That would only last to the end of the current term of Congress, but it's been done before.

In 1953, President Dwight Eisenhower used a recess appointment to install Chief Justice Earl Warren on the high court. He was later confirmed by the full Senate. The same for Justices William Brennan in 1956 and Potter Stewart in 1958.

What's behind the push for a fourth stimulus check
Mark Knoller