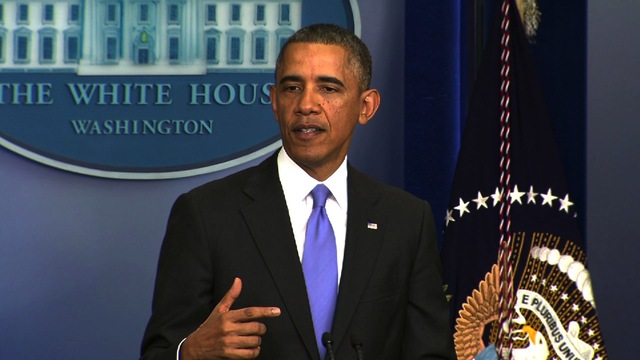 President Obama announced Thursday that his administration will let health insurers extend existing health plans on the individual and small-group markets into 2014. The administrative policy change will let insurers reach out to the millions of Americans being dropped from their plans so that they can renew their insurance for another year while the market adjusts to new Obamacare regulations.

"I completely get how upsetting this could be for a lot of Americans, particularly after assurances they heard from me," Mr. Obama said from the White House briefing room. "To those Americans, I hear you loud and clear."

Now that the new Obamacare insurance marketplaces are opening, more than 4,800,000 people across the country are being dropped from their insurance plans, according to the latest CBS News tally. Plans are being canceled if they fail to meet the health care law's 10 minimum standards, including maternity care, emergency visits, mental health treatment and pediatric dental care.

The dropped plans seemingly violate Mr. Obama's 2009 campaign pledge that, "If you have insurance that you like, then you will be able to keep that insurance."

Mr. Obama acknowledged Thursday that he will "have to win back some credibility on this health care law in particular and on a whole range of these issues in general."

He added, "I think it's fair to say the [Obamacare] rollout has been rough so far, and I think everybody understands I'm not happy the rollout has been wrought with a whole range problems I've been deeply concerned about."

The president's stance on the problem of dropped plans has shifted significantly in the past few weeks -- while he has now apologized for the issue and has acknowledged it is a problem, he initiallysuggested that he wasn't breaking his promise. Late last month, Mr. Obama pointed out that plans that existed before the Affordable Care Act was enacted were "grandfathered in" to the system -- consumers only lost coverage if insurers altered those policies after the law took effect. In that case, Mr. Obama said, insurers had to "replace them with quality, comprehensive coverage."

Mr. Obama conceded to CBS News chief White House correspondent Major Garrett, "My expectation was that for 98 percent of the American people, either it genuinely wouldn't change at all or they'd be pleasantly surprised with the options in the marketplace and that the grandfather clause would cover the rest. That proved not to be the case. And that's on me. And the American people -- those who got cancellation notices do deserve and have received an apology from me."

The problem, meanwhile, has been compounded by the fact that many people have been unable or discouraged from shopping the new Obamacare marketplaces because of the significant technical problems with HealthCare.gov and some state-run Obamacare websites.

The Health and Human Services Department reported Wednesday that just over 106,000 people have enrolled in plans on the new marketplaces so far -- well below the approximately 500,000 enrollees the administration was expecting to see in the first month of open enrollment.

The president acknowledged the enrollment numbers are not "as high a number as we'd like" in part because of the website problems, but he stressed that nearly a million people have successfully completed an application on the site and are on their way to enrolling.

Mr. Obama conceded to CBS' Major Garrett that "we would not have rolled out something knowing very well that it wasn't going to work the way it was supposed to, given all the scrutiny that we knew was gonna be on the website."

In fact, Mr. Obama said, "I was not informed correctly that the website would not be working the way it was supposed to. Had I been informed, I wouldn't be going out saying, 'Boy, this is going to be great.' You know, I'm accused of a lot of things, but I don't think I'm stupid enough to go around saying 'this is going to be like shopping on Amazon or Travelocity,' a week before the website opens if I thought that it wasn't going to work."

The president said the problems with the website weren't the only unanticipated problems.

"Even if we get the hardware and software working exactly the way it's supposed to, with relatively minor glitches, what we're also discovering is that, you know, insurance is complicated to buy," he said. "And another mistake that we made, I think, was underestimating the difficulties of people purchasing insurance online and shopping for a lot of options, with a lot of costs and a lot of different benefits and plans, and somehow expecting that that would be very smooth, and then they've also got to try to apply for tax credits on the website."

Republicans on Wednesday slammed the administration for the low enrollment figures, juxtaposing them with the millions being dropped from insurance plans that no longer meet Obamacare standards.

"More people in Michigan have had their health care plans cancelled than have enrolled nationwide," House Ways and Means Committee Chairman Dave Camp, R-Mich., said in a statement. "Given that these early enrollment numbers are inflated to include those just 'shopping' for a plan, it is clear that the real truth is even worse than we are being told."

The problem has also seriously alarmed Democrats in Congress. In recent days, six Democrats in the Senate -- five of whom are up for re-election next year -- joined onto a bill that would have made the same policy changes to Obamacare that Mr. Obama announced Thursday. One of those Democrats, however -- Sen. Joe Manchin, D-W.Va. -- said the problems with Obamacare extend beyond enrollment issues.

"They have more than a rollout problem," Manchin said on MSNBC Thursday morning. "There is a product problem. We have to make sure the products are there. And the market will determine that product."

Rep. Steven Cohen, D-Tenn., characterized Wednesday's meeting as "a pretty frank and forthright discussion of the political fallout of the 'if you like your health care, you can keep it' statement.'"

On the Senate floor Thursday morning, Senate Minority Leader Mitch McConnell, R-Ky., said, "It's time for the Democrats to work with us to repeal this law and start over." Then, he and other Senate Republicans took turns sharing anecdotes on the Senate floor of people from their state who had been dropped from their plans.

The Republican-led House on Friday plans to vote on a bill called "Keep Your Health Plan Act," which would allow plans that existed on the individual market as of Jan. 1, 2013 to stay in effect through 2014. While the legislation would enact a policy change similar to the administration's, the White House has said it opposes the bill because it would allow insurers to sell 2013 plans in 2014 to anyone, not just customers who already have those plans. That, White House spokesman Jay Carney told reporters Tuesday, "creates all sorts of problems for insurers trying to meet the basic standards" set by the Affordable Care Act, undermining the whole law.

Additionally, Boehner told reporters Thursday, "I am highly skeptical that they can do this administratively."

The White House said that Health and Human Services is using its enforcement discretion to enact the change -- similar to the way Mr. Obama exercised his executive authority to defer deportations of young undocumented immigrants.

While Mr. Obama said he apologizes for the poor Obamacare rollout, he said, "I make no apologies for us taking this on, because somebody sooner or later had to do it... We've got to move forward on this. It took 100 years for us to even get to the point where we could start talking about and implementing a law to make sure everybody's got health insurance. And my pledge to the American people is, is that we're going to solve the problems that are there, we're going to get it right, and the Affordable Care Act is going to work for the American people."

Biden says "the Second Amendment is not absolute"
Stephanie Condon