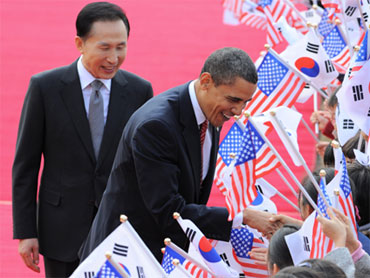 Speaking at a joint news conference with Mr. Obama, President Lee Myung-bak said the deal would be similar to his proposal for a package of political and economic incentives in exchange for the one-step, irreversible dismantling of North Korea's nuclear program.

Lee's grand bargain proposal stems from concerns that North Korea would continue to backtrack on promises after winning concessions in negotiations.

The Lee and Obama meeting comes as Washington prepares to send an envoy for the first U.S.-North Korea bilateral talks since Mr. Obama took office.

Obama joined Lee at the Blue House, South Korea's version of the White House, where the U.S. leader took in spectacular views of the hills of Seoul on a chilly, gray morning. Obama stood on red-carpeted steps and looked out on military regiments in colorful garb and flag-waving children.

The leaders walked down to the sprawling manicured lawn, taking in the pageantry as Mr. Obama shook hands. It was symbolic of America's ever-improving relations with South Korea, a crucial Asian ally.

"This was the most spectacular ceremony for a state visit we have been involved with," Obama gushed as the two leaders began their meetings. Said Lee of Obama's Asia trip: "You saved the best for last."

The two men were meeting privately before they were scheduled to make formal statements. In brief comments before reporters, Mr. Obama praised the success of the South Korean economy, saying it was one reason why the nation has become an important player on the world stage.

A stalled trade agreement, though, still looms as a concern for the economic powerhouses.

Mr. Obama was embarking on perhaps the easiest leg of his whirlwind four-country Asian trip that has taken him away from Washington for the longest stretch of his presidency.

He made brief stops in Tokyo and Singapore before a longer, ceremony-filled visit to China.

Strongly pro-U.S., Lee took office in South Korea in early 2008, a year before Obama, and relations between the two countries have been improving. The tenure of President George W. Bush had seen anti-American sentiments become more common here.

Not so much now. The South Korean president, for instance, was the first foreign leader in Obama's presidency to get the honor of a joint appearance in the Rose Garden, in June.

"I hope to look at it as growing pains of a relationship maturing," said Lee Jung-hoon, an international relations expert and dean of Yonsei University in Seoul. "Certainly under Lee Myung-bak and Obama we are returning to normalcy."

A remaining sticking point has been trade. To South Korea's dismay, a free trade agreement that was signed in 2007 by the two governments under previous leaders has been stalled ever since in Congress.

The pact was already going nowhere on Democratic-run Capitol Hill during the Bush administration, which struck the deal after painstaking negotiations. Obama's election, with his concerns about U.S. access to the South Korean market for U.S. auto exports, put the deal in further doubt.

After his talks, Mr. Obama then has a brief rally at Osan Air Base outside Seoul with some of the 28,500 U.S. troops who are stationed in South Korea. It will be the third time Obama has addressed U.S. troops with his decision still pending on how many more Americans to send into the Afghanistan war.

With that decision deferred until after the trip - "certainly before year's end," was the elastic timeframe Mr. Obama offered in an NBC News interview - the South Korean visit is an opportunity to highlight international cooperation. Lee's government recently announced plans to expand a reconstruction team now helping to rebuild Afghanistan and to dispatch police and troops to protect them, two years after withdrawing all forces following a fatal hostage crisis.

North Korea is an area where little daylight separates the leaders, unlike before. They are united in their impatience with North Korea's habit of making overtures, getting rewards and then backtracking to raise tensions again, and Obama and Lee were expected to discuss next steps in detail.

Seoul, fearing a military strike over its border or a rush of refugees from the North, has historically resisted a sterner approach toward ending the impasse over nuclear weapons - with it and China generally less interested than the U.S. and Japan in pursuing more sanctions. Those nations, as well as Russia, are in the six-party talks with North Korea over the active weapons program it has in defiance of U.N. Security Council resolutions.

Lee, though, has changed tack, talking of a "grand bargain" in which Pyongyang would get a one-time offer of concessions to replace the step-by-step process that has yielded little so far.

Mr. Obama, too, has made much of his desire to take a different approach. North Korean leader Kim Jong Il said the country will return to the six-party process it abandoned earlier this year only if Washington engages separately in one-on-one talks with the North. Days before Mr. Obama's arrival in the region, administration officials said Stephen Bosworth, the U.S. special envoy for North Korea, would visit Pyongyang on an unspecified date, probably this year.

Trade, though, is trickier territory for the allies.

Mr. Obama reinforced the sense that the issue isn't on a fast track in a round of TV interviews hours before his South Korean arrival.

The accord would be the largest for the U.S. since the North American Free Trade Agreement in the 1990s and the biggest ever for South Korea. Lee likes to talk of it as offering a $10 billion boon to the U.S. economy. The South Koreans have balked at any suggestion of reopening the agreement.