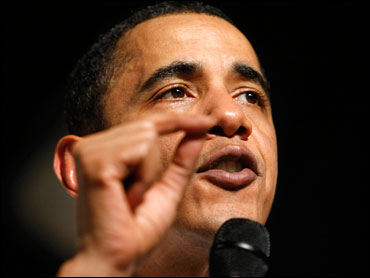 After taking his message for economic recovery and reform to the American people over the first two months of his presidency, Barack Obama is going global.

In an op-ed that ran in more than 30 papers around the world, President Obama sought to challenge nations to "bold, comprehensive and coordinated action" to combat the global economic crisis, while also reassuring them that "the United States is ready to lead."

"We are living through a time of global economic challenges that cannot be met by half measures or the isolated efforts of any nation," Mr. Obama wrote.

The president's op-ed comes in advance of next month's G-20 summit. He called on member nations to continue their own stimulus programs, saying "efforts should be robust and sustained until demand is restored."

But he made clear that America must shoulder its share of the burden.

"I know that America bears our share of responsibility for the mess that we all face. But I also know that we need not choose between a chaotic and unforgiving capitalism and an oppressive government-run economy."

"If we turn our backs on them, the suffering caused by this crisis will be enlarged, and our own recovery will be delayed because markets for our goods will shrink further and more American jobs will be lost."

Key to that would be a substantial boost to the emergency capacity of the International Monetary Fund, Mr. Obama said.

Mr. Obama also called on the world to put an end to "to the reckless speculation and spending beyond our means; to the bad credit, over-leveraged banks and absence of oversight that condemns us to bubbles that inevitably bust."

President Obama's op-ed is the latest effort to communicate his economic vision to Americans and the world. He spoke broadly of his agenda interview Sunday.

The president's column was distributed by Tribune Media Services and ran in the following newspapers:

Here is the full text of the op-ed:

We are living through a time of global economic challenges that cannot be met by half measures or the isolated efforts of any nation. Now, the leaders of the Group of 20 have a responsibility to take bold, comprehensive and coordinated action that not only jump-starts recovery, but also launches a new era of economic engagement to prevent a crisis like this from ever happening again.

No one can deny the urgency of action. A crisis in credit and confidence has swept across borders, with consequences for every corner of the world. For the first time in a generation, the global economy is contracting and trade is shrinking.

Trillions of dollars have been lost, banks have stopped lending, and tens of millions will lose their jobs across the globe. The prosperity of every nation has been endangered, along with the stability of governments and the survival of people in the most vulnerable parts of the world.

Once and for all, we have learned that the success of the American economy is inextricably linked to the global economy. There is no line between action that restores growth within our borders and action that supports it beyond.

If people in other countries cannot spend, markets dry up — already we've seen the biggest drop in American exports in nearly four decades, which has led directly to American job losses. And if we continue to let financial institutions around the world act recklessly and irresponsibly, we will remain trapped in a cycle of bubble and bust. That is why the upcoming London Summit is directly relevant to our recovery at home.

My message is clear: The United States is ready to lead, and we call upon our partners to join us with a sense of urgency and common purpose. Much good work has been done, but much more remains.

Our leadership is grounded in a simple premise: We will act boldly to lift the American economy out of crisis and reform our regulatory structure, and these actions will be strengthened by complementary action abroad. Through our example, the United States can promote a global recovery and build confidence around the world; and if the London Summit helps galvanize collective action, we can forge a secure recovery, and future crises can be averted.

Our efforts must begin with swift action to stimulate growth. Already, the United States has passed the American Recovery and Reinvestment Act — the most dramatic effort to jump-start job creation and lay a foundation for growth in a generation.

Other members of the G-20 have pursued fiscal stimulus as well, and these efforts should be robust and sustained until demand is restored. As we go forward, we should embrace a collective commitment to encourage open trade and investment, while resisting the protectionism that would deepen this crisis.

Second, we must restore the credit that businesses and consumers depend upon. At home, we are working aggressively to stabilize our financial system. This includes an honest assessment of the balance sheets of our major banks, and will lead directly to lending that can help Americans purchase goods, stay in their homes and grow their businesses.

This must continue to be amplified by the actions of our G-20 partners. Together, we can embrace a common framework that insists upon transparency, accountability and a focus on restoring the flow of credit that is the lifeblood of a growing global economy. And the G-20, together with multilateral institutions, can provide trade finance to help lift up exports and create jobs.

Third, we have an economic, security and moral obligation to extend a hand to countries and people who face the greatest risk. If we turn our backs on them, the suffering caused by this crisis will be enlarged, and our own recovery will be delayed because markets for our goods will shrink further and more American jobs will be lost.

The G-20 should quickly deploy resources to stabilize emerging markets, substantially boost the emergency capacity of the International Monetary Fund and help regional development banks accelerate lending. Meanwhile, America will support new and meaningful investments in food security that can help the poorest weather the difficult days that will come.

While these actions can help get us out of crisis, we cannot settle for a return to the status quo. We must put an end to the reckless speculation and spending beyond our means; to the bad credit, over-leveraged banks and absence of oversight that condemns us to bubbles that inevitably bust.

Only coordinated international action can prevent the irresponsible risk-taking that caused this crisis. That is why I am committed to seizing this opportunity to advance comprehensive reforms of our regulatory and supervisory framework.

All of our financial institutions — on Wall Street and around the globe — need strong oversight and common sense rules of the road. All markets should have standards for stability and a mechanism for disclosure. A strong framework of capital requirements should protect against future crises. We must crack down on offshore tax havens and money laundering.

Rigorous transparency and accountability must check abuse, and the days of out-of-control compensation must end. Instead of patchwork efforts that enable a race to the bottom, we must provide the clear incentives for good behavior that foster a race to the top.

I know that America bears our share of responsibility for the mess that we all face. But I also know that we need not choose between a chaotic and unforgiving capitalism and an oppressive government-run economy. That is a false choice that will not serve our people or any people.

This G-20 meeting provides a forum for a new kind of global economic cooperation. Now is the time to work together to restore the sustained growth that can only come from open and stable markets that harness innovation, support entrepreneurship and advance opportunity.

The nations of the world have a stake in one another. The United States is ready to join a global effort on behalf of new jobs and sustainable growth. Together, we can learn the lessons of this crisis, and forge a prosperity that is enduring and secure for the 21st century.