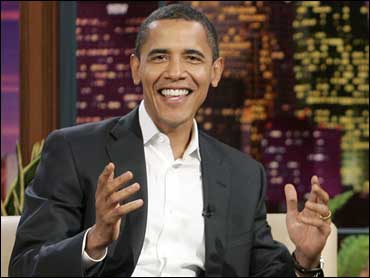 "We've got a long way to go," the Illinois senator cautioned Wednesday on "The Tonight Show with Jay Leno."

"Hillary is not the first politician in Washington to declare 'mission accomplished' a little too soon," Obama said, referring to President Bush's 2003 speech in which he stood beneath a "Mission Accomplished" banner and declared the end of major combat in Iraq.

"When your name is Barack Obama, you're always the underdog," the senator quipped.

Leno also needled him about claims that he's a distant relative of Vice President Dick Cheney. Lynne Cheney, the vice president's wife, says she uncovered a long-ago tie between the two families while researching a book.

Obama insisted the newfound relationship would have limits.

"I don't want to be invited to the family hunting party," he said, alluding to a 2006 accident in which Cheney wounded a friend with shotgun pellets.

In an interview that ranged from serious to silly, the Democratic presidential candidate predicted his wife Michelle could best Bill Clinton in a debate, groused about Mr. Bush's Iran policy and fessed up to sloppy housekeeping.

"I admit that I am not always great about hanging up my clothes," Obama said.

"And you want to be president?" Leno scolded.

"I am not a perfect man," the senator said.

Obama's appearance on Leno's stage was one of three talk-show interviews he scheduled on a swing through Los Angeles. He taped a segment with "The Ellen DeGeneres Show," which will run Oct. 29, and planned a segment for Public Broadcasting Service's "Tavis Smiley," to air Thursday.

Obama will be back in the area later this week for a string of private fundraisers, including an event at the home of Universal Studios chief Ron Meyer.

During his chat with DeGeneres, Obama restated his position supporting civil unions for gays and lesbians and leaving it up to churches to make their own decisions on gay marriages.

"The state has to make sure that everybody's rights are equal and right now we've got over twelve hundred benefits that married people get that people who have civil unions that are recognized by their own states don't get," Obama said, according to a transcript of the show. "That's just not right."