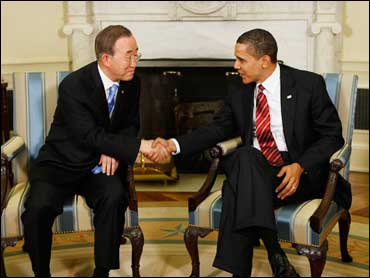 President Barack Obama, declaring the violence in Darfur and inaction in the face of its worsening humanitarian crisis are "not acceptable," pledged Tuesday to work more closely with the United Nations to bring peace to western Sudan's conflict-wracked region.

Obama described Darfur as an ongoing crisis that has only gotten worse with the Sudanese president's decision to kick out some of the most important nongovernmental aid organizations after the Hague-based International Criminal Court issued an arrest warrant charging him with war crimes and crimes against humanity in Darfur.

The U.N. estimates that the decision threatens more than 3 million people with the loss of food aid, health care or suitable drinking water.

"It is not acceptable to put that many people's lives at risk," Obama said. "We need to be able to get those humanitarian organizations back on the ground."

Ban, in turn, told Obama that 2009 is a "make-or-break" year for the organization and its member countries, and that he hopes the United States will work with the international organization to address global warming and the humanitarian crisis in Darfur.

Ban's top priority this year is to encourage global leaders to adopt a new international climate treaty at a conference in December in Copenhagen.

He emphasized that the U.S. and other leaders of the world's largest developed economies "should not lose sight of the challenges and plight of hundreds of hundreds of millions of poorest people of the developing countries who have been impacted by this economic crisis."

"I am going to focus and work together with the leaders of the world to address this issue, to unlock all this massive investment for the green economic recovery, and also to save our planet," Ban told Obama. "This is an issue of our era. I count on your strong commitment and leadership."

It was the first meeting of the two leaders since the inauguration. Also on hand were Secretary of State Hillary Rodham Clinton and Susan Rice, the U.S. ambassador to the United Nations. Rice earlier had emphasized the meeting's symbolism as an example of a new U.S. multilateralism.

Obama had invited Ban to the White House to seek a stronger relationship between the world body and its single biggest backer. The United States has agreed to pay nearly a quarter of the U.N.'s $4.86 billion operating budget, but is perennially late with its dues.

Ban, who became secretary-general in January 2007, has promoted a good working relationship with the United States.

During much of President George W. Bush's tenure, the United States had a difficult relationship with the U.N., particularly with the U.S. decision to invade Iraq in 2003 and when John Bolton was U.S. ambassador to the world body for 16 months in 2005-2006. Bolton pressed for sanctions against Iran and North Korea and an overhaul of the United Nations, antagonizing many U.N. member states.

But during the last two years of the Bush administration, Bolton's successor, the Afghan-born Zalmay Khalilzad, improved relations somewhat.

Obama emphasized his administration would seek to use the U.N. more. "The United Nations can be an extraordinarily constructive, important partner in bringing about peace and stability and security to people around the world. And the secretary-general has shown extraordinary leadership during his tenure," Obama said.

Obama called the conversation "wide-ranging" on global security and development issues, including the global financial crisis, and said the two leaders discussed "how that's affecting not only developed countries, but very poor countries around the world, and the potential threat to food supplies if it continues to worsen, and the need for international coordination."

Also high on the agenda was a donors' conference and upcoming elections for Afghanistan, where Obama said the U.S. and U.N. hope to "ramp up and better coordinate civilian activities ... so that we can be more effective in that region." He said talk also turned to "long-suffering" Haiti, where Ban and former President Bill Clinton had visited a day earlier.

But most of the talk was about Darfur, where the U.N. estimates some 2.7 million people have been chased from their homes and up to 300,000 people have died since the conflict began in 2003 when rebel groups took up arms against the government, complaining of discrimination and neglect.