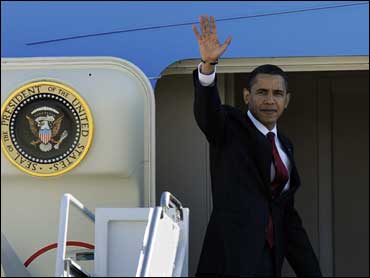 In California, the state that gave him more popular and electoral votes than any other, President Obama will try to make the case for his budget initiatives on education, energy and health care.

But at a town hall meeting today in Costa Mesa and tomorrow in Los Angeles, his message may be overshadowed if not drowned out by expressions of outrage over the $165-million in taxpayer funds used for bonus payments to executives at bailed-out insurance giant AIG.

Mr. Obama might get a better chance to make his case in a lighter setting when he tapes a Tonight Show segment with Jay Leno that airs Thursday night.

The appearance is not meant to show off the president's sense of humor, says White House spokesman Robert Gibbs. "We look at it as a way of discussing the economic situation that we find ourselves in."

It'll be the first time Mr. Obama steps foot in California since taking office. He won a powerful victory in the state last November, walking away with 7.4-million popular and 55 electoral votes. He defeated Sen. John McCain by a margin of 61-to-37 percent.

But conditions have changed since then. It's unemployment rate is now 10.1 percent, state employees are being forced to take two unpaid days off a month, government revenues are still on the decline and another big deficit is being forecast.

Fifty-eight days into his presidency, Mr. Obama is embarking on his tenth out-of-town domestic trip. California will also be the tenth state he has visited as President.

In the same period of time, immediate predecessor George W. Bush had made 13 trips to 19 states. Both men had made a single daytrip out of the country: Mr. Obama to Canada, Mr. Bush to Mexico.

American presidents regard such travel as a way to take their policy initiatives directly to the people and briefly make contact with those who otherwise cannot penetrate the presidential bubble.