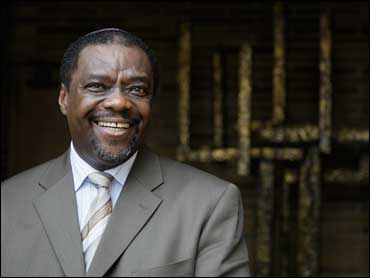 Here's something about Barack Obama you probably didn't know: He's related to a rabbi.

His wife's cousin, Rabbi Capers C. Funnye Jr., leads a mostly black Jewish congregation on Chicago's Southwest Side. He is Michelle Obama's first cousin once removed: Her paternal grandfather is the brother of Funnye's mother.

While Obama has struggled to win over Jewish voters, vigorously defending his support of Israel in Florida and other states with large Jewish populations, he hasn't mentioned Funnye on the campaign trail.

Funnye (pronounced fuh-NAY) says he hasn't been involved in the campaign, except to donate money. But he speaks glowingly about the Obamas.

"I'm very moved and very proud of all they've become so far," the 56-year-old rabbi told The Associated Press.

Funnye and Michelle Obama, 44, lost touch in later years, though he attended her wedding in 1992. They reconnected about a decade ago when Funnye started working at a social work organization based near the University of Chicago, where Michelle Obama worked.

"He was very caring, a little skinny and very sincere," Funnye said.

The Obamas have not publicized the connection to Funnye out of respect for the privacy of their large extended family, said Katie McCormick Lelyveld, a spokeswoman for Michelle Obama.

Funnye's relationship to the presidential candidate has been relatively unknown outside the Chicago Jewish community. The Forward, a Jewish newspaper, first reported the relationship.

"It was a total surprise to me," said Ira Forman, the executive director of the National Democratic Jewish Council. "Despite coming under attack unfairly in the Jewish community, Obama didn't even mention this. I think it's a piece of the puzzle that validates him."

Some Jews have disagreed with Obama's stated willingness to negotiate with countries such as Iran and Syria. Some also have been turned off by praise the Illinois senator received from Nation of Islam leader Louis Farrakhan, whose past comments about Judaism have offended many. Obama has rejected Farrakhan's support.

Religion has played a major role in Obama's campaign, sometimes in ways that were out of his control. He has addressed false Internet claims that he's Muslim. He has defended his Christian faith, though disavowing his former pastor, the Rev. Jeremiah Wright and his incendiary claims.

Having a rabbi in the Obama family seems unlikely to affect Jewish voters.

Jews, who are overwhelmingly Democratic, comprise only about 2 percent of voters, according the Pew Forum on Religion and Public Life. But they vote in large numbers in swing states.

"A rabbi in the Obama family is certainly a wonderful welcomed aspect ," said Rep. Robert Wexler, D-Fla, one of Obama's chief surrogates before Jewish audiences. But, he added: "What's important is Barack Obama staunchly supports the security of the state of Israel. ... I think the Jewish community votes on issues."

In his nearly two decades at Beth Shalom, Funnye has garnered a reputation as a spiritual leader who promotes interfaith dialogues and has worked to unify black and white Jews.

"I believe that all humanity and all faith communities are trying to reach a summit," he said. "The summit is of brotherhood and sisterhood, a summit of equality."

Funnye attended the African Methodist Episcopal Church growing up, then explored a number of other religions before converting.

"I thought maybe there were other Christian communities. I went by the Pentecostal churches. I read books on Islam," he said. "Ultimately, Judaism really piqued my interest. It had an appeal to part of my soul."

Funnye, the first black member of the Chicago Board of Rabbis, has reached out to both immigrant and Muslim communities.

"What characterizes him is his ability to build bridges among many different groups," said Gary Tobin, president of the Institute for Jewish and Community Research, a think tank and activist group. "This includes his work to bridge the gulf that existed between black and white Jews in the U.S."