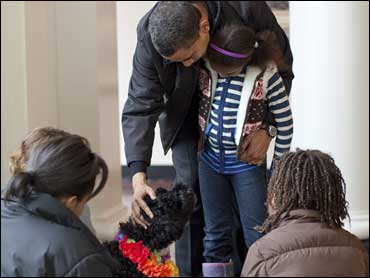 The first family has settled on a first pet - a 6-month-old Portuguese water dog that the Obama girls are naming Bo.

The selection was one of the White House's most tightly-kept secrets.

The dog is a gift from Sen. Edward M. Kennedy, who owns several Portuguese water dogs himself.

"We couldn't be happier to see the joy that Bo is bringing to Malia and Sasha," Kennedy said in a statement. "We love our Portuguese water dogs and know that the girls - and their parents - will love theirs, too."

The Washington Post reported in its online editions Saturday night that Mr. Obama's daughters chose the name Bo for the pup because first lady Michelle Obama's father was nicknamed Diddley. The name for the dog was an apparent reference to the singer "Bo" Diddley.

Throughout the day Saturday, celebrity Web sites and bloggers were abuzz with rumors of the first family's selection of a Portuguese water dog; one site even claimed it had pictures of the future first pet.

Mr. Obama promised his daughters a puppy during the presidential campaign.

"This is Washington. That was a campaign promise," Mr. Obama said when he appeared on Jay Leno's television talk show last month, as the audience roared with laughter. "No, I'm teasing. The dog will be there shortly."

The president and first lady had said their choice was down to either a Portuguese water dog or a Labradoodle because they were considered good pets for children who have allergies, as Malia does.
By Associated Press Writer Philip Elliott