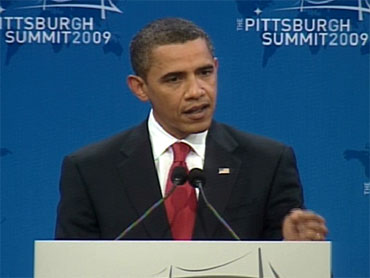 President Barack Obama asserted on Friday that he and other leaders of the world's 20 largest economies took actions that "brought the global economy back from the brink" and saved or created millions of jobs.

"We leave here today confident and united," he said at the conclusion of a two-day summit to deal with the worst economic crisis since the 1930s.

He spoke as world leaders lined up behind sweeping promises designed to fix a malfunctioning global economic system in hopes of heading off future financial meltdowns.

The leaders agreed to leave stimulus programs in place for now until recoveries are more firm. "We must make sure that when growth returns, jobs do, too," he told a wrap-up news conference.

"We brought the global economy back from the brink. We laid the groundwork today for long term prosperity," Mr. Obama said.

"It is important to recall the situation we faced" in April when the Group of 20 leaders last met and when talk was rampant about a second Great Depression.

In a statement issued at the conclusion of the summit, the full G-20 leadership echoed Mr. Obama's sentiment. "It worked," the statement said of stimulus and other measures taken by the world leaders.

"Pittsburgh was a perfect venue for this work," Mr. Obama said of the one-time despairing Rust Belt city. "This community has known its share of hard times. It picked itself up and dusted itself off. It serves as a model for turning the page to a 21st century."

Mr. Obama also said that the world has responded to the nuclear threat posed by Iran with an "unprecedented show of unity" and that a confrontational response from the nation will result in its further isolation.

He said countries around the world share "grave doubts" about Iran's presentation of its nuclear intentions.

His administration continued the Bush policy of keeping it secret while intelligence was gathered to make an air-tight case that the purpose was nuclear weapons, not nuclear power. The president decided to go public today after it became clear Iran had learned U.S. intelligence was on to them, Reid reports.

Meanwhile, Mr. Obama brushed off demonstrations in the city. He said they were mild compared with some in the past at international gatherings.

"I fundamentally disagree with their view that the free market is the source of all ills," he said. "Many of the protests are just directed generically at capitalism. ... One of the great things about the United States is you can speak your mind."

He also said that G-20 leaders would spare no effort to reach a global warming agreement at an international gathering later this year in Copenhagen. Summit leaders agreed to a bid by Mr. Obama to reduce government subsidies for fossil fuels such as oil and coal that contribute to global warming. He said if fully implemented, the move would phase out $300 billion in global subsidies.

"All nations have a responsibility to face this challenge," he said.