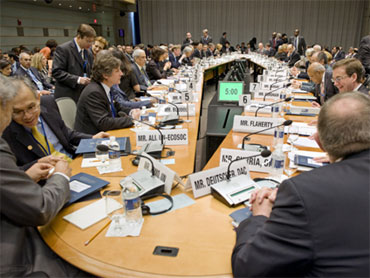 President Obama is preparing for his third foreign trip of the year, this time to Canada for a series of international summits - the G8 focusing on peace and security and the G20, held in Toronto - focusing on the global economy.

A main issue of the economic meeting in Toronto will be for the world's leading economies to figure out how to the balance continued stimulus spending to spur the economic recovery with reducing debt.

"At stake this week in Toronto, is the ability of the world and the world's leaders to come together to show that they can bring the world out of recession and that they can stick together, even after the deepest parts of that crisis have passed," said Stewart Patrick, a Senior Fellow with the Council on Foreign Relations.

Last year, the G20 in London was Mr. Obama's first foreign trip. It also came at the moment where the global recession was at its worst. The member states came together and collectively pledged money for stimulus spending and a push for global financial regulatory reform.

More than a year later, the world economy is in the process of recovering and many states are worried about too much spending. The recent crisis in Greece where that nation's debt nearly bankrupted the country has many in Europe exceedingly cautious to spend too much. On the other side of the coin are economists who say a sharp reduction in government stimulus could send the economic recovery backwards.

"What the Greek crisis has done is complicate matters for the G-20 because it's forced European leaders to pay extra attention to their own budget positions... as opposed to think necessarily of about what's the implications of what their policies are for the world economy," said Stewart.

A White House official said that the president will not ask for additional stimulus spending at the weekend meeting, but will work to have the nations come to a global understanding on the timing for some nations to stop stimulus spending slowly and others to do so later rather than sooner. But coming to an agreement will not be easy.

"Right now the tide is definitely moving away from the President. This week, we've seen the British government announce major slashes in domestic spending, as well as the announcement of some massive tax increases. This is exactly opposite of where the President would like the members of the G-20 to go, and he's trying to remind him that if we go down this route, we could face a double-dip recession," said Stewart.

The global debate over stimulus versus debt is also playing out in Washington, where many spending bills are caught in the crossfire. Held up on the hill are billions of dollars in spending measures to extend unemployment benefits, money for doctors who take Medicare patients and possible aid to states to help prevent teacher layoffs. Also held up in the debate is increased spending for the war in Afghanistan.

Each of those is caught in the battle between continuing to spend to keep the recovery going and fear that too much debt will hamper economic growth in the long run. Republicans and some fiscally conservative Democrats are on the side of debt reduction, with the GOP hoping to make run-away government spending an issue with voters in the fall.

"At a moment when certain European countries appear to be coming apart because of their own debt, Democrats in Washington still can't seem to break the habit," said Senator Minority Leader Mitch McConnell.

Also this weekend, the President will have his first one-on-one meeting with Britain's new Prime Minister David Cameron, where it's expected that the BP oil spill will be among the issues of conversation.