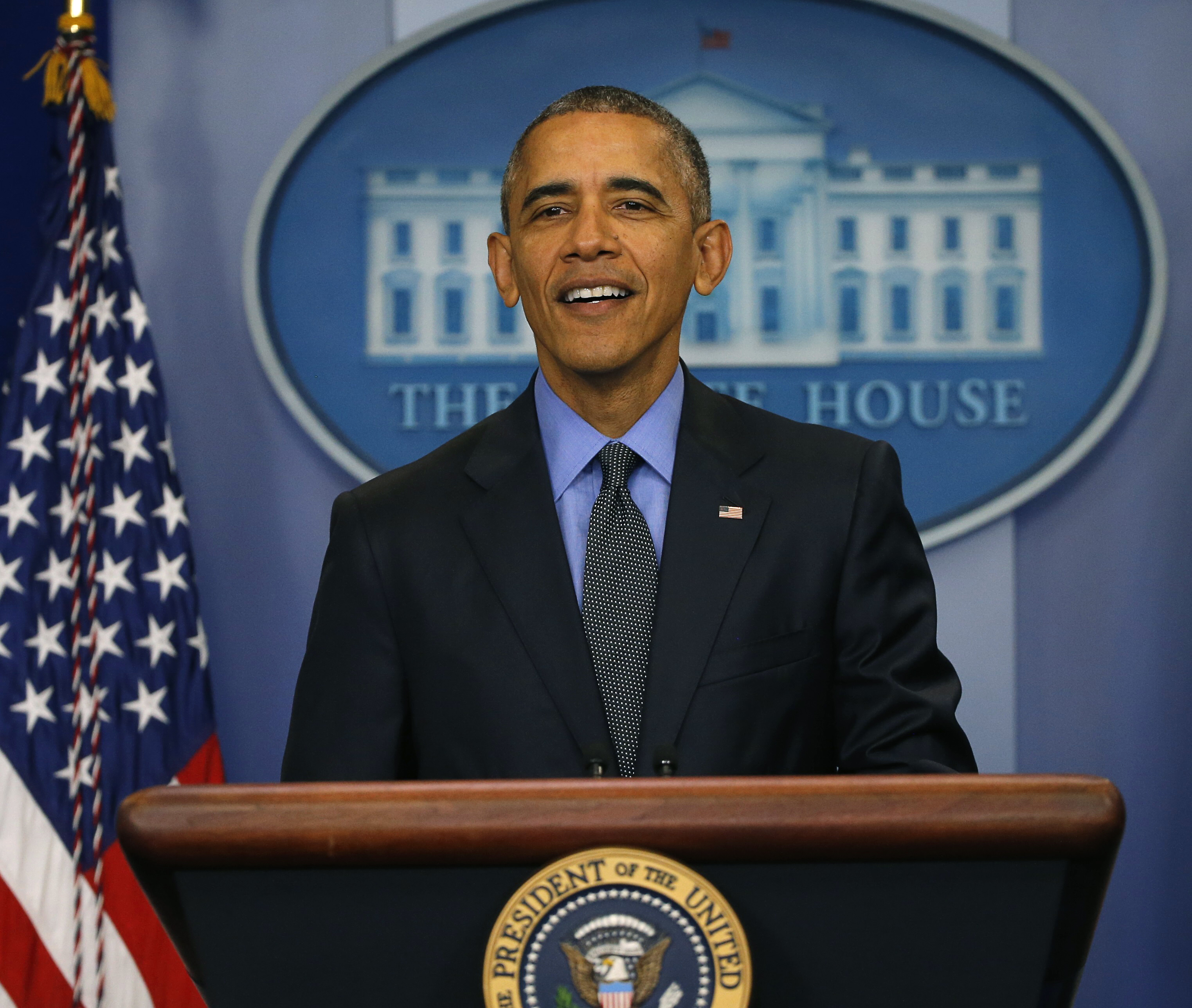 In his year-end news conference, President Obama on Friday looked back at his administration's accomplishments from the past year, expressing optimism that he can get more done with Congress in his final year in office.

"We still have some unfinished business," he said to reporters from the White House briefing room. "I plan on doing everything I can with every minute of every day... to deliver for the American people."

The president thanked Congress for ending the year on a high note: Lawmakers on Friday easily passed a $1.1 trillion spending package to fund the government through next September, averting the risk of a government shutdown until next fall.

With the threat of an imminent shutdown off the table, Mr. Obama said, "Congress and I have a long runway to get some things done." There is "still a lot Congress can do to promote job growth and increase wages in this country."

He called it "the most pro-labor, pro-environment, progressive trade deal in history that eliminates just about every tariff on American manufacturing goods."

He also reiterated his interest in working with Congress to reform the criminal justice system. Earlier Friday, Mr. Obama commuted the sentences of 95 men and women.

"There has been sincere, serious negotiations and efforts by Democrats and Republicans to create a criminal justice system that is more fair, more even handed, more proportionate, and is smarter about how we reduce crime," he said, adding that he's been "really impressed" with the cooperation between some far-left and far-right members of Congress on the issue.

"Those are just two examples" of areas where he plans to work with Congress, Mr. Obama said. "Wherever there's an opportunity, I'm going to take it."

Mr. Obama acknowledged that his interest in shutting down the prison at Guantanamo, Bay, Cuba will be an "uphill battle." However, he said, "Every battle I've had with Congress over the last five years has been uphill."

The president said he has a "good working relationship" with House Speaker Paul Ryan, R-Wisconsin, even though they have "fundamentally different visions of where we want to move the country."

He commended Ryan and all lawmakers involved in getting the omnibus spending bill through Congress. He specifically hailed the "terrific negotiations" by Democrats that kept ideological amendments out of the spending bill, as well as the fact that the bill eases up on Congress' arbitrary "sequester" budget cuts.

In addition to expressing his satisfaction with that bill, the president hailed the job growth of the past year, noting that the unemployment rate is down to 5 percent. He also highlighted the impact of the Affordable Care Act, which has helped bring the uninsured rate to below 10 percent for the first time since the data has been collected. Mr. Obama also touted the global climate agreement reached in Paris just a few weeks ago, "that was only possible because of American leadership," he said.

Mr. Obama also hailed his leadership in securing a nuclear agreement with Iran this year, as well as the historic thaw in relations with Cuba.

"As I look back at this year, the one thing I see is so much of our steady persistent work is paying off for the American people in big, tangible ways."

The president also spoke at length about the fight against terrorism, at home and abroad. Mr. Obama acknowledged "it is very difficult for us to detect lone wolf plots" like the one that led to the San Bernardino, California shooting.

Some reports in the wake of the San Bernardino attacks said one of the shooters had posted social media posting expressing their allegiance to ISIS. However, as CBS reported, the shooter had shared private messages over Facebook of that nature.

"It's important to distinguish between posts that are public... versus private communications through various social media or apps," Mr. Obama said Friday. "Our law enforcement and intelligence professionals are constantly monitoring public posts, and that is part of the visa review process... If you had private communications between two individuals, that's harder to discern by definition."

Mr. Obama added that his administration will be "engaging with the high-tech community" to address that challenge.

Starting with a national televised address earlier this month, the president has made a concerted effort in recent weeks to reassure the public he is handling terrorist threats appropriately. On Monday, he spoke to reporters at the Pentagon on the fight against extremists abroad, and on Thursday he visted the National Counterterrorism Center.

"Our most importat job is to keep Americans safe," Mr. Obama reiterated Friday. He argued that the U.S. and its global allies are aggressively fighting ISIS in Iraq and Syria, noting that the group has lost about 40 percent of its territory in Syria.

Mr. Obama on Friday also defended the U.S. decision to participate in coalition airstrikes in Libya in 2011, arguing that inaction could have resulted in an even worse outcome.

After his news conference, Mr. Obama is heading out to San Bernardino, California, where he will meet with the families of the victims of the terror attack there. After that, he flies to Hawaii where he and his family will vacation until January 3.