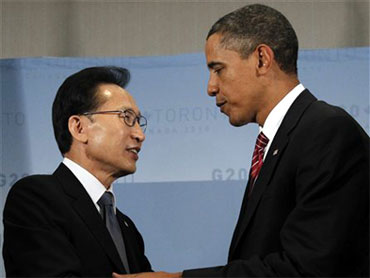 President Obama said Saturday that North Korea must be "held to account" for its alleged sinking of a South Korean warship, a tough statement of support for an ally, made at its leader's side.

After talks with South Korean President Lee Myung-Bak on the sidelines of global summits here, the U.S. president used some of his strongest language yet about the March sinking of the South Korean warship Cheonan.

An independent report has found that it was caused by a North Korean torpedo.

"There have to be consequences for such irresponsible behavior," Mr. Obama said.

Also pleasing Lee, Mr. Obama announced that he would submit to Congress early next year a long-upheld free trade agreement with South Korea.

He said the U.S. will resume talks with South Korea to resolve issues that have blocked the accord. Those discussions will take place between now and the Group of 20 international summit, to be held in Seoul in November. Mr. Obama said he would present the accord to Congress within a few months after that.

The administration of George W. Bush negotiated a free trade deal with South Korea in 2007, but the agreement has been stalled in the United States since that time because of determined opposition led by U.S. automakers who contend that the agreement did not go far enough to remove barriers to the sale of U.S. cars in Korea.

Since taking office in January 2009, the Obama administration, in the face of stiff opposition from U.S. labor groups, has refused to send the agreement to Congress for a vote.

South Korea has already referred the ship sinking to the U.N. Security Council, which could adopt a resolution condemning the North for the sinking or issue a less stringent presidential statement. Lee said he wants a "strongly worded" resolution.

"We will do all that we can to deter any acts of North Korean aggression leveled against us," said the South Korean leader.

Said Mr. Obama: "We stand foursquare behind him."

Such tough talk was sure to be a topic in the U.S. president's next meeting, with Chinese President Hu Jintao.

Since China is a veto-wielding member of the Security Council, its support is required for any resolution. But Beijing, as North Korea's main ally, has resisted punishment for Pyongyang.

However, neither Mr. Obama nor Hu described any specifics they had in mind for their discussions, sticking to platitudes about often-difficult relations between the two powers when they briefly spoke to reporters before their meeting.

"It's my belief that we've accomplished many things," Mr. Obama said.

"Real progress has been made in this relationship," Hu said.

Mr. Obama also announced that he and Lee had agreed, at South Korea's request and in light of the ship sinking, to delay handing off wartime operational control of Korean forces on the Korean Peninsula from the U.S. to Korea until the second half of 2015. This gives "appropriate time ... to do this right," Mr. Obama said.

Korea was to have assumed control of its own forces in 2012 in the event of war.

Mr. Obama began his day by concluding a summit of the leading eight industrial democracies at a resort in Canada's forested Muskoka lakes region, then flew here for a second, expanded summit of the so-called Group of 20 nations. Those larger meetings, mostly being held on Sunday, were getting underway with a dinner.

In between, Mr. Obama was meeting one-on-one at his hotel with important foreign counterparts, including British Prime Minister David Cameron as well as Lee and Hu.

Mr. Obama's talks with Cameron were their first since the conservative British leader took power last month with a coalition government.

They had been expected to address the difficulties that the BP oil spill in the Gulf of Mexico has introduced into the American-British relationship. BP, a British-based company, has come under fierce criticism from Mr. Obama and others in the U.S. since a rig it was leasing exploded on April 20, causing the biggest offshore oil spill in U.S. history.

Although the oil continues to gush into the water, deepening the crisis, neither leader mentioned the topic when the two briefly addressed reporters after their hourlong session. And they took no questions, ignoring those shouted at them concerned the oil spill catastrophe.

Mr. Obama and Cameron made clear that the troubled war in Afghanistan must see progress this year.

"This period that we are in is going to be critical," Mr. Obama said.

Added Cameron: "Making progress this year, putting everything we have into getting it right this year is vitally important."

Their meeting had a collegial feel after the president gave his British ally a ride back to Toronto on his specially outfitted presidential helicopter. "He threatened to send me a bill," Cameron joked. "But I said times are very tight in the U.K., so I'll have to take that as a free lift."