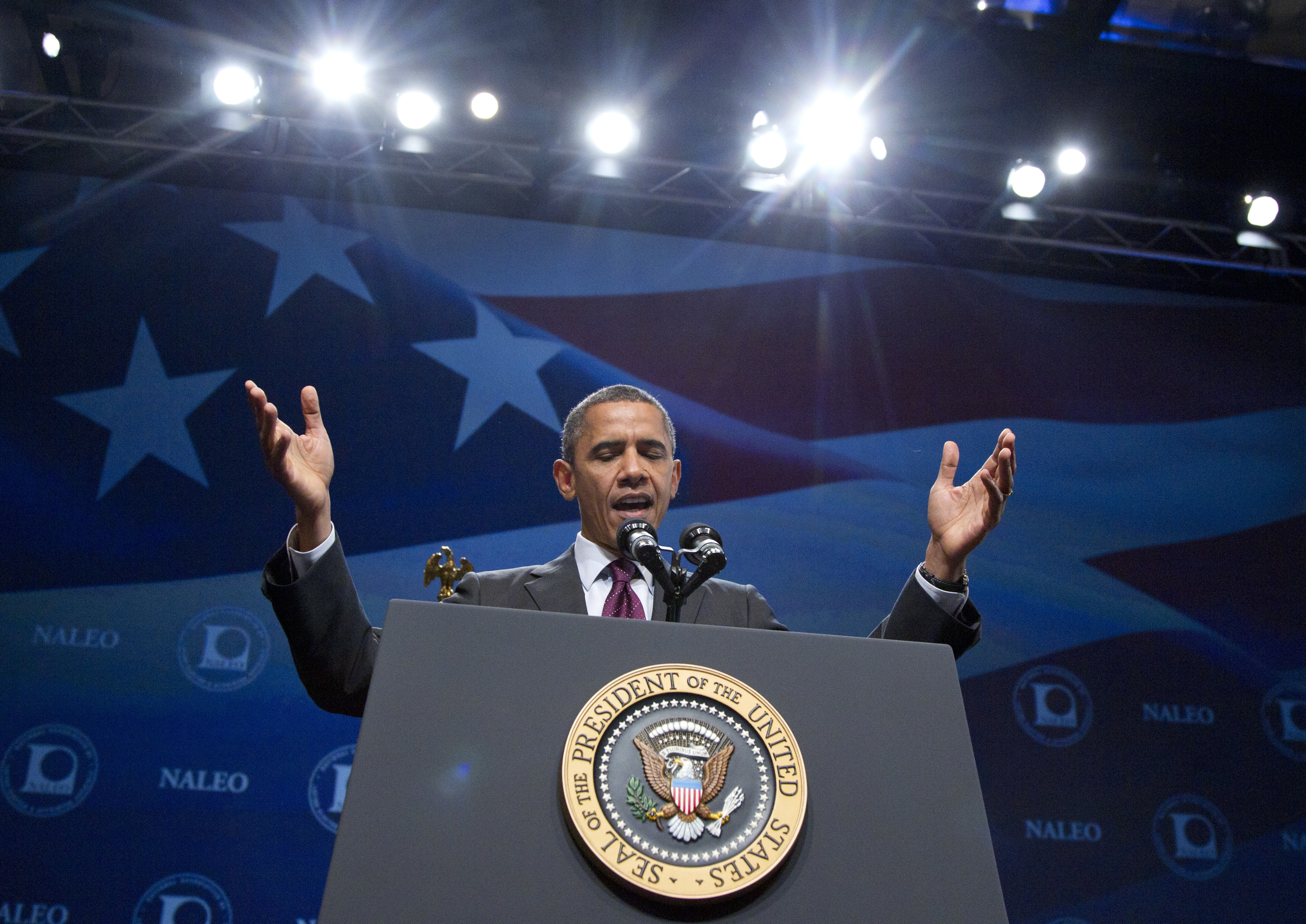 (CBS News) In a passionate speech to Latino leaders, President Obama on Friday defended his decision to stop deporting certain undocumented youth and blasted Republicans -- including leaders in Congress and Mitt Romney -- for standing in the way of immigration reform.

"In the face of a Congress that refuses to do anything on immigration... I will take action where I can," Mr. Obama said at the National Association of Latino Elected Officials (NALEO) conference in Orlando.

"It's long past time we gave them a sense of hope," Mr. Obama said of the undocumented youth who can now qualify to stay in the country legally and acquire work permits.

"Your speaker from yesterday has a different vision," the president continued in reference to Romney, his presumptive general election rival.

The president noted that in his remarks to NALEO on Thursday, Romney said that when he makes a promise, he keeps it.

"He has promised to veto the DREAM Act, and we should take him at his word," Mr. Obama said. After a pause, he added, "I'm just saying."

The president noted Friday that the DREAM Act failed in Congress in 2010 largely due to a lack of Republican support, even though the measure had bipartisan support in the past. "We should've passed the DREAM Act a long time ago," he said. "The only thing that changed was politics."

In his address to NALEO yesterday, Romney said the president's latest move amounted to politics and called for long-term immigration reforms. He , such as streamlining the temporary worker visa program. The GOP candidate attempted to walk a fine line between appealing to the Latino community and appealing to his Republican base, but it appeared he may have failed to please either side.

Romney did not say whether he would reverse Mr. Obama's decision to stop deporting undocumented youth but said he would eventually replace it with a long-term immigration plan.

The Obama campaign on Friday morning released a web video slamming Romney for refusing to say whether he'd reverse the policy in place. With the sound of a ticking clock playing in the background, the video documents the several times in the past week Romney dodged questions on the matter, including the multiple evasive answers he gave on CBS' "Face the Nation" on Sunday.

The Romney campaign, meanwhile, released its own web video focusing on the ways Mr. Obama has failed to fulfill his promises to the Latino community, particularly with respect to economic advancement. The video points out that the Latino unemployment rate stands at 11 percent and that the childhood poverty rate among Hispanics leads the nation. The video also notes that Mr. Obama last addressed the NALEO conference as a presidential candidate in 2008. "Four long years for America. Can we afford four more?" it asks.

The president today defended his record, noting the harsh economic conditions that existed when he took office. "A lot of Latino communities... already faced higher employment," he said. He added, "Of course the economy isn't where it needs to be... The question is how do we create more jobs... What vision are we going to stand up for, who are we going to fight for."

He noted that the Latinos were more likely to go without health insurance and touted the passage of his health care reform law. "That was the right thing to do," he repeated three times.