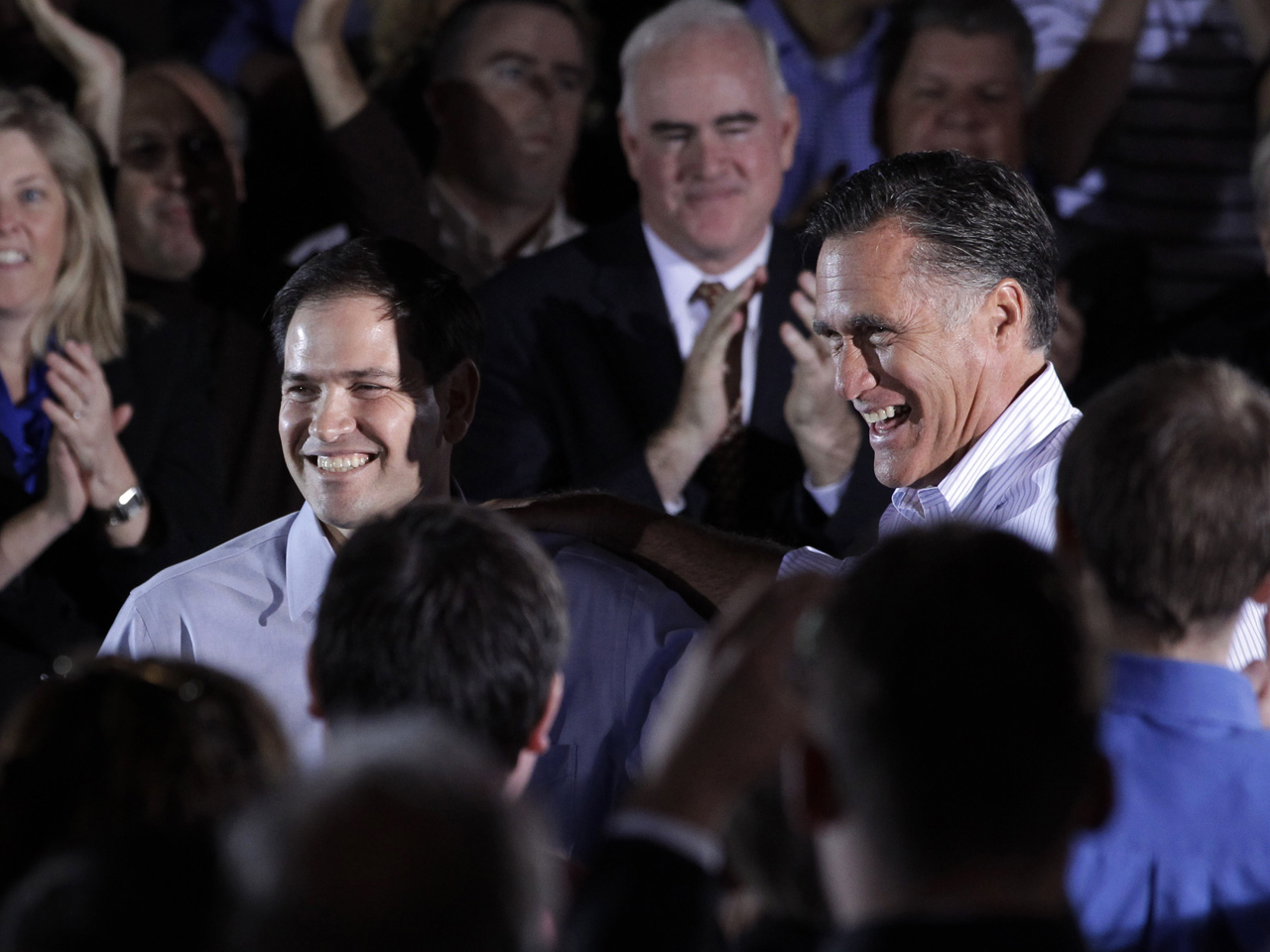 (CBS News) ASTON, Pennsylvania - Though he insists he hasn't begun to evaluate vice presidential candidates, Mitt Romney appeared to be holding auditions on Monday as he campaigned here with Florida Sen. Marco Rubio. Romney brushed aside a question on his choice of a running mate - and ducked taking a position on an immigration bill that Rubio is drafting.

With the tea party darling at his side in this Philadelphia suburb, Romney pointed out that the selection process for a vice presidential candidate is just beginning. "We're looking at various legal resources to help with in that process, accounting staff and so forth to take a look at tax returns and things of that nature," Romney said during a press conference - his first in more than five weeks.

Rubio himself declined to speak on the topic, instead focusing his remarks on what he can do to propel Romney into the White House. "I look forward to being part of this effort," he said.

Romney is eager to make inroads among Hispanic voters, as polls show him trailing President Obama by a 5-to-1 margin among that demographic. He was asked to describe his position on the Florida senator's compromise to the DREAM Act, but said he was still studying it, even as he commended some of its features.

Rubio has said his proposal - which has not yet been formally introduced - would allow young people who came to the United States with their parents to have access to a non-immigrant visa that allows them to study. After those studies are complete, they would be allowed them to work legally in the United States. Eventually, Rubio said, they would gain the same status of other non-immigrant visa-holders and are eligible to apply for residency, and would be eligible for citizenship three to five years after they obtain a green card.

Romney took a tough position on immigration during the Republican primary, saying he would veto the Democratic version of the DREAM Act and decrying "amnesty" when Newt Gingrich suggested he would allow illegal immigrants who've been in the country longer than 25 years a chance to become citizens. On Monday, though, his remarks were markedly less strident, as he promised to lay out "a whole series of policies" relating to immigration in the coming months.

"Obviously, our first priority is to secure the border," Romney said, offering a preview. "And yet we also have very substantial visa programs in this country. I've spoken about the need to have a visa system that's right-sized for the needs of our employment community. And so how we adjust our visa program to make it fit the needs of our country is something I'll be speaking about down the road."

Both Romney and Rubio expressed their support for laws that require voters to show identification when casting a ballot - a measure meant to cut down on fraudulent voting. Rubio asked a crowd of several hundred gathered to see the two men speak how anyone could question the idea, pointing to a recent experience he had buying an exercise bike.

"You know what the cashier asked me for, when I went to pay? My ID," the freshman senator told the crowd. It was the same thing getting on an airplane, he said. "So what's the big deal?"

It was Rubio's first time campaigning with Romney this election cycle. But the Florida senator is acting like a national candidate even when he's not standing next to Romney. He is helping raise money for Republican candidates across the country, including an appeal Monday through his political action committee, Reclaim America, on behalf of Ohio Senate candidate Josh Mandel. And he is scheduled to give a foreign policy address on Wednesday at the Brookings Institution.