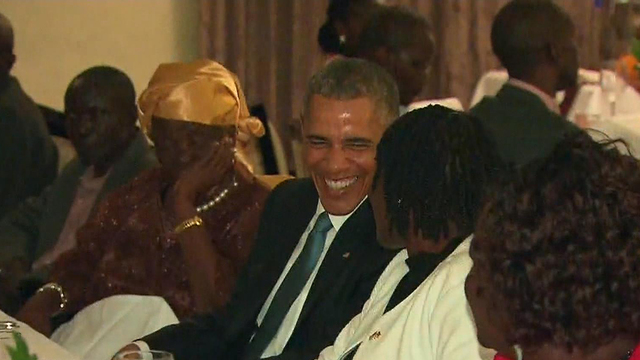 President Obama was visiting Kenya on Saturday, his ancestral homeland, for the first time since becoming the U.S. leader. Security was very high as thousands of people lined the streets of the capital, Nairobi, trying to get a view of the president, reports CBS News chief White House correspondent Major Garrett.

After a swift and low-key arrival ceremony Friday evening, followed by dinner with his extended family, President Obama dove into a busy agenda addressing economic development, counter-terrorism and human rights. At the Global Entrepreneurship Summit, enthusiasm for the Mr. Obama's visit echoed through the halls.

President Obama brought $1 billion in new investments -- about half from government backed loans or grants -- to boost young entrepreneurs in Africa.

"This is personal for me," Mr. Obama said. "There's a reason why my name's Barack Hussein Obama. My father comes from these parts."

The president said Africa's economic growth will depend on young dreamers with ideas.

"Entrepreneurship offers a positive alternative to the ideologies of violence and division that can all too often fill the void when young people don't see a future for themselves," Mr. Obama said.

Security forces blanketed Nairobi, a city of 3.7 million, where main thoroughfares were deserted hours before the president's arrival and trip across town.

The Kenyan government is on edge, mindful of the 2013 attack at the Westgate Mall in downtown Nairobi by al Qaeda affiliate al-Shabab, which left 67 people dead. This April, another al-Shabab strike at Garissa University left 148 students -- Christians deliberately targeted by the group -- dead.

"We started off with about 200, now we are working towards putting in place more than 400," Boinnet said.

The cameras feed into a modern command center where Kenyan security forces monitor activity across Nairobi, Garissa and Mombasa.

Boinnet says al-Shabab is a danger, "but it is active and that's where we are fighting hard against them far off from the city," Boinnet said. "Our primary preoccupation has always been terrorism. We are concerned that they may do something just to embarrass us, but we are very hard at work."

Security concerns led to a quick airport ceremony. The highlight was a flower girl and a surprise visitor -- the president's half-sister Auma.

For security reasons, there will be no repeat trip to the Kenyan village where the president's father was born. Mr. Obama last visited in 2006 as a senator.

There's another matter on the president's agenda; challenging the Kenyan government -- and many other like-minded governments in Africa -- to soften their hostility to gay rights. Mr. Obama has promised to make that case directly to Kenyan President Uhuru Kenyatta.

Carrie Schwab-Pomerantz, personal finance expert, talks about her new book, "The Charles Schwab Guide to Finances After 50: Answers to Your Most Important Money Questions"

"Lethal force": An up-close look at U.S. Air Force base in Guam

Astronaut Scott Kelly on capturing an Earth without borders