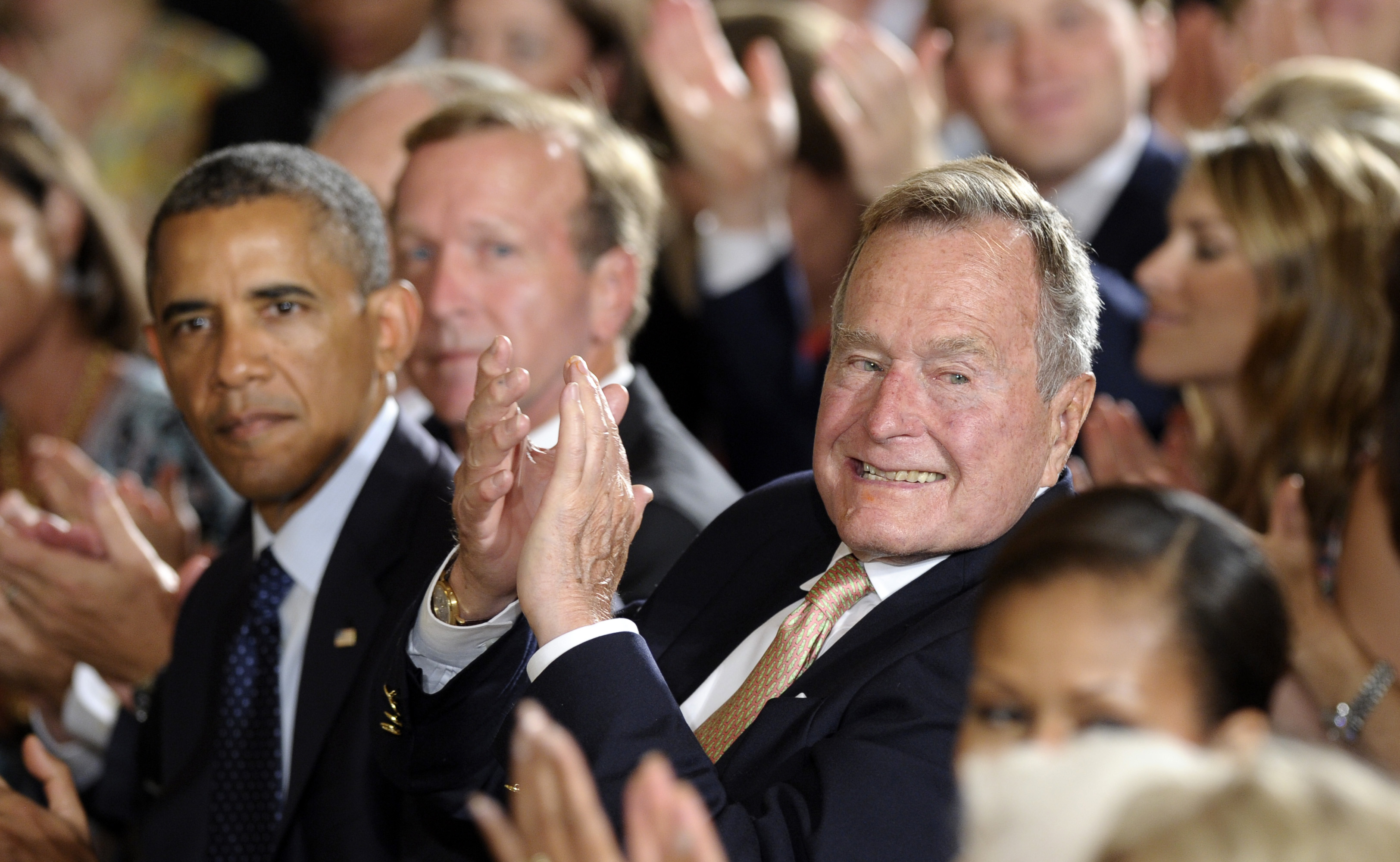 Former President George H.W. Bush returned to the White House Monday, where he presented the 5,000th Daily Point of Light award, an honor that Mr. Bush first handed out 24 years ago.

Alongside President Obama, Mr. Bush commemorated this milestone award, an honor for volunteers who represent "a thousand points of light," a phrase Mr. Bush first used in his 1988 speech accepting the Republican nomination for president and repeated in his 1989 inaugural speech.

The 5,000th award recipients, Floyd Hammer and Kathy Hamilton, created the nonprofit Outreach to deliver free meals to hungry children in the U.S. and 14 other countries. Mr. Obama thanked his predecessor who "illuminated the path for so many others" to volunteer.

"I'm not sure everybody fully appreciates how much this man has done to strengthen our nation of service," Mr. Obama said of Mr. Bush. "On behalf of all of us, we are surely a kinder and gentler nation because of you and we can't thank you enough."

Both presidents have prioritized community service in their work. At the ceremony, Mr. Obama announced a federal task force will facilitate private-public sector communications to better volunteer work that supports national priorities. Earlier in his presidency, Mr. Obama signed legislation to triple AmeriCorps by 2017.

As president, Mr. Bush created the award's organization, Points of Light; he is the honorary chairman while his son, Neil Bush, is the chairman.

"He still has a strong spirit for service," Neil Bush said in an interview with CBS News' Peter Maer on Monday. "Dad doesn't particularly like talking about legacy, but his own life exemplifies a commitment to service."

When announcing the first award on November 22, 1989, Mr. Bush explained the Daily Point of Light Awards don't honor "the best" but are given to those who represent of "the best in all of us." The staff of the Memphis Commercial Appeal newspaper was the first honoree.

"We will single out a few, because they represent the many," Mr. Bush said then. "And we hope that by highlighting their achievements, and the ways they've found to serve, we can inspire others to serve."

Mr. Bush is no stranger to the White House during Mr. Obama's tenure. He and his son Jeb popped by for visits in January 2012 and January 2010, when they were in town to attend the annual Alfalfa Dinner. The former president was awarded a Medal of Freedom by Mr. Obama in February 2011 at a White House ceremony.

"It's like coming home for Barbara and me," Mr. Bush said at Monday's ceremony. The Obamas demonstrated "wonderful hospitality," he added.

The 89-year-old former president has not been to the White House since he was hospitalized with bronchitis in December. Though he's been in "much better health" since his release in February, Mr. Bush remained in a wheelchair on Monday as he remains "physically disabled," his son Neil told CBS News.

His "great spirit" was on display with his feet in red and white striped socks - keeping up his reputation for eclectic footwear. Mr. Bush gave Mr. Obama a hot pink pair of socks before the ceremony, one of his aides told CBS News.

"We're calling him GQ man instead of '41," Neil Bush quipped at the ceremony.

First lady Michelle Obama and former first lady Barbara Bush were also at the ceremony. The two families' last encounter was in May at the opening of George W. Bush' library opening in Dallas.