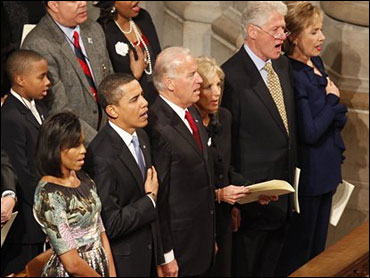 Dr. Sharon Watkins, general minister and president of Disciples of Christ and the first woman to deliver the sermon at the service, said Mr. Obama's choices in office should reflect the values and ethics of the Lord, reports CBS News White House Correspondent Mark Knoller.

"Some has to stand watch and be ready to defend - and Mr. President - tag, you're it," she said.

Mr. Obama and his wife sat in the front row at the service, held at the National Cathedral in Washington. Also seated in the front row were Vice President Joe Biden, Jill Biden, and Bill and Hillary Clinton.

Twenty religious leaders from different faiths participated in the hour-an-a-half long service. According to the Associated Press, President Obama sang along while a children's choir sang "He's got the whole world in his hands."

The Washington Post reports that because so many members of Congress planned to attend the invitation only service, a markup session for Eric H. Holder Jr., the attorney-general designate, was postponed.