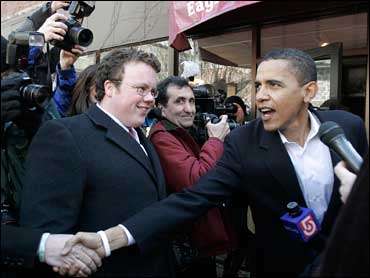 Illinois Sen. Barack Obama repeated his apologies for an offhand remark that the lives of U.S. troops killed in Iraq were "wasted."

At an appearance in Iowa on Sunday, the Democratic presidential candidate told listeners: "We now have spent $400 billion and have seen over 3,000 lives of the bravest young Americans wasted."

He immediately apologized on Sunday, saying the remark was "a slip of the tongue."

During an appearance Monday in Nashua, he apologized again, telling reporters he meant to criticize civilian leadership of the war, not those serving in the military.

"Even as I said it, I realized I had misspoken," Obama said. "It is not at all what I intended to say, and I would absolutely apologize if any (military families that) felt that in some ways it had diminished the enormous courage and sacrifice that they'd shown."

Obama made his second visit to New Hampshire on Monday, following a weekend announcement speech in his home state and a visit to the first-caucus state, Iowa. His appearances have come with packed audiences, enthusiastic crowds — and, until the controversy over his remarks emerged, scant scrutiny.

Obama came to New Hampshire on the heels of New York Sen. Hillary Rodham Clinton. She faced criticism last weekend for not saying her vote to authorize the use of force in Iraq was a mistake.

Obama, by contrast, faced little of that skepticism. Even his sharpest questioners began by offering praise and support.

"He hasn't gotten into specifics, but that'll come," state Rep. Jeffrey Fontas said after a Nashua house party with 60 activists. "It's early, so we'll see more and more."

That house party in Nashua brought questions about: