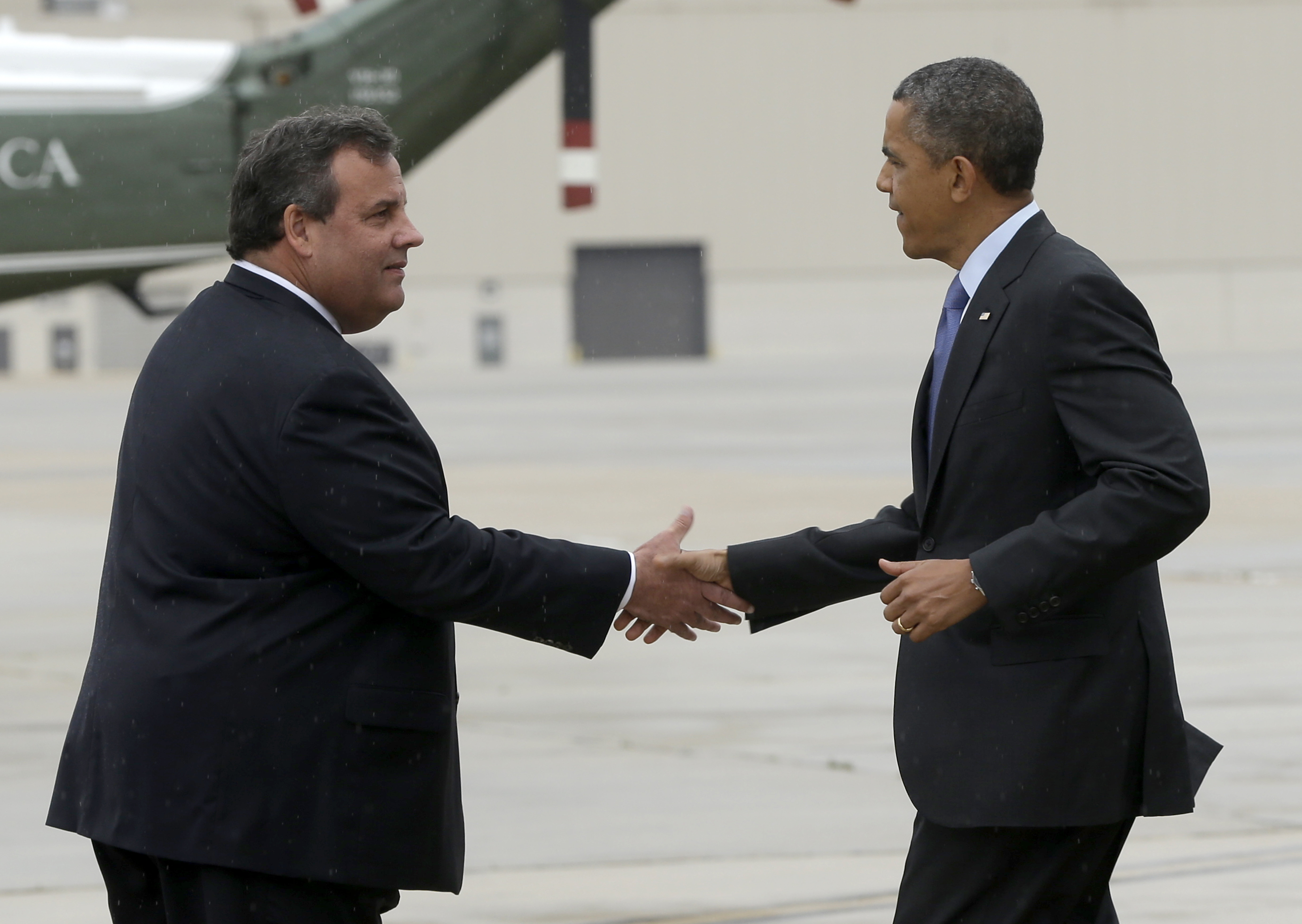 President Barack Obama and New Jersey Gov. Chris Christie toured the rebuilt New Jersey Shore Tuesday and stopped by an arcade booth called Touchdown Fever. The game offered a stuffed bear to anyone who could toss a football through a tire. President Obama tried five times and missed. Gov. Christie threw the football through the tire on his first try. Obama gave him a high five. Christie then gave Obama the bear he won.

This would make a very awkward Bruce Springsteen song, but the Obama and Christie relationship faces the same question at the heart of every one of the Boss' songs about boardwalk relationships buffeted by circumstance: Can it last? Christie is a Republican governor running in a heavily Democratic state (Obama won it by double digits) so for the moment, the answer is yes. Obama is on Team Christie. "America, bring your family and friends. Spend a little money on the Jersey Shore," the president said, boosting the state during his visit as much as he did the governor's re-election chances. But if Christie wants to one day court Republican primary voters who dislike the president, won't he have to put a little distance between himself and Obama? Remember how Florida Republicans punished their governor, Charlie Crist? Isn't the breakup inevitable?

If Christie decides to run for president, how he handles the Obama question will tell us something about the trajectory of his campaign: Will he try to smooth over the anger conservatives feel for his lapses from party dogma, of which the palling around with the president may sting most? Or will he run headlong at the party, using his relationship with Obama as proof of how effective pragmatic governing can be, drawing a contrast with the ideologues and debating-society candidates who can pass purity tests but haven't ever actually done anything?

Christie has modified his view of President Obama before. At a speech at the Reagan Library in 2011 when he was considering a presidential run, Christie painted Obama as an ongoing calamity in leadership, representing timidity and limited vision. Now he praises Obama for those very skills he once said he lacked.

Christie is still very popular and a powerful fundraising draw for the party, but he has work to do with conservatives. What angers them is not so much that Christie embraced the president when his state was in need, but that he did so at a crucial moment in the 2012 campaign. He helped burnished Obama's bipartisan credentials when he needed it most. At the very least, Christie provided material for an appealing tableau of the incumbent, which edged out opportunities for any talk about the challenger--whatever his name was.

That's the emotional energy fueling the distrust of the relationship, but the bromance also threatens to be a stand-in for larger doubts about Christie's ideological core. Specifically, conservatives distrust Christie's support for the Second Amendment and his embrace of Medicaid expansion as a part of President Obama's Affordable Care Act. There is also likely to be a general suspicion of a popular northern Republican. "If you're up by 30 points as a Republican in New Jersey, you're probably doing something parts of the Republican base won't like," says one veteran Republican operative.

So Christie might need a cleansing break. But moving away from Obama would be nearly impossible. It's not just that there are hours of footage of him with President Obama acting like chums. He can't distance himself from Obama because doing so will destroy his essential characteristics as a straight shooter who can get things done by working with the other side. Besides, the last GOP nominee spent his campaign trying to wiggle around the unappealing aspects of his career as a governor and it didn't work.

Instead, what Christie will do is make the case for compromise as he does so often on the campaign trail. His presidential candidacy will fall directly in the fault line of the current larger Republican debate over how you balance principles with pragmatism. Can you work within the system, making compromises and occasionally embracing the enemy, or should the next leader of the Republican Party be pure, representing a clear contrast to the opposition?

The Obama-Christie relationship presents a number of ways to test what's durable and what's fleeting in politics. Bipartisanship only seems possible these days after a disaster. Once the plywood is off the windows and the chimney is back up, political players revert to form. Will that be true in this case? For Obama, the trip is supposed to turn the page after a few bad weeks. It allows him to talk about the economy, show government doing useful work, and remind people of his bipartisan tendencies. Some analysts are claiming it will help the president move on from the controversies that have befallen him. Christie should hope this punditry is true. If the White House controversies about which everyone has been so obsessed can be dispatched with such ease, Christie will have no problem moving past whatever baggage he may have from his relationship with the president. It'll be as easy as throwing a football through a tire.