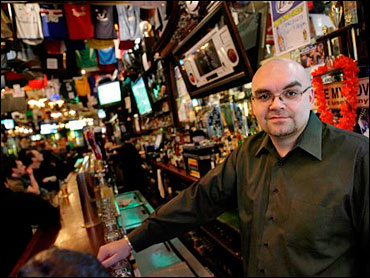 It's depressing, it's not usually sung in Ireland for St. Patrick's Day, and its lyrics were written by an Englishman who never set foot on Irish soil.

Those are only some of the reasons why a Manhattan pub owner is banning the song "Danny Boy" for the entire month of March.

"It's overplayed, it's been ranked among the 25 most depressing songs of all time and it's more appropriate for a funeral than for a St. Patrick's Day celebration," said Shaun Clancy, who owns Foley's Pub and Restaurant, across the street from the Empire State Building.

The 38-year-old Clancy, who started bartending when he was 12 at his father's pub in County Cavan, Ireland, promised a free Guinness to patrons who sing any other traditional Irish song at the pub's pre-St. Patrick's Day karaoke party on Tuesday.

The lyrics for "Danny Boy," published in 1913, were written by English lawyer Frederick Edward Weatherly, who never even visited Ireland, according to Malachy McCourt, author of the book "Danny Boy: The Legend of the Beloved Irish Ballad."

He said Weatherly's sister-in-law had sent him the music to an old Irish song called "The Derry Air," and the new version became a hit when opera singer Ernestine Schumann-Heink recorded it in 1915.

Some say the song is symbolic of the great Irish diaspora, with generations of Irish fleeing the famine and poor economic conditions starting around 1850. Others speculate it's sung by a mother grieving for her son or by a desolate lover. Lyrics include: "The summer's gone, and all the flowers are dying/ 'Tis you, 'tis you must go and I must bide."

"Danny Boy" was recorded by Bing Crosby in the 1940s, served as the theme song of television's "Danny Thomas Show" from 1953 to 1964. It has been performed by singers ranging from Judy Garland and Elvis Presley to Johnny Cash and Willie Nelson.

At least one patron at Foley's was glad to hear the song was banned from the pub for the rest of the month.

The song is "all right, but I get fed up with hearing it - it's like the elections," Martin Gaffney, 73, said in a thick Irish brogue.

Gaffney said Wednesday he looked forward to crooning his own Irish favorites, such as "Molly Malone" - whose own theme is hardly a barrel of laughs.

A sort of unofficial anthem of Dublin also known as "Cockles and Mussels," the song tells the tale of a beautiful fishmonger who plies her trade on city streets and dies young of a fever.