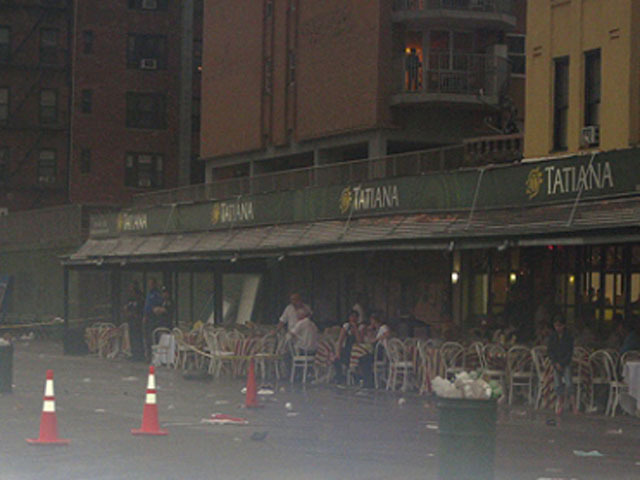 NEW YORK - Two men opened fire on a group of young people sitting on a bench on a New York City boardwalk packed with beach-goers seeking relief from the heat, killing a teenage girl and leaving four men wounded. Police said the shooting may be gang-related.

The shootings by two gunmen happened during an altercation just before 5:30 p.m. Thursday on the Brighton Beach boardwalk in Brooklyn, said police spokesman Paul Browne. He said all of the victims were sitting on the same bench.

He said police were investigating the possibility that the shooting was gang-related, and some people were being questioned. Browne declined to say whether they were potential suspects.

Tysha Jones, 16, died at Coney Island Hospital of a gunshot wound to the torso. Four other people were wounded — including a 23-year-old man who was in critical condition with a stomach wound. Also wounded were a 21-year-old, a 25-year-old and a 26-year-old. They were taken to Lutheran Hospital.

No arrests have been made. The investigation is continuing.

Pat Singer, the founder of the Brighton Neighborhood Association, said the hot weather brought hordes of young people to the beach Thursday. "It's massive chaos," she said.

Saya Suzuki, 30, was just about to sit down inside a boardwalk restaurant with her 6-year-old daughter, Sonya, when the shooting began. Suzuki told The New York Times she heard about six shots, then grabbed her daughter and saw two teenagers run by her.

"I just picked up my daughter and got away from the bullets," she said. "It happened so quickly and I had to protect my daughter."

"Everybody was running and screaming," Joe Sierra told New York's Daily News. "It was chaotic for five to 10 minutes."

The neighborhood that borders Coney Island is home to a large Russian emigre population.