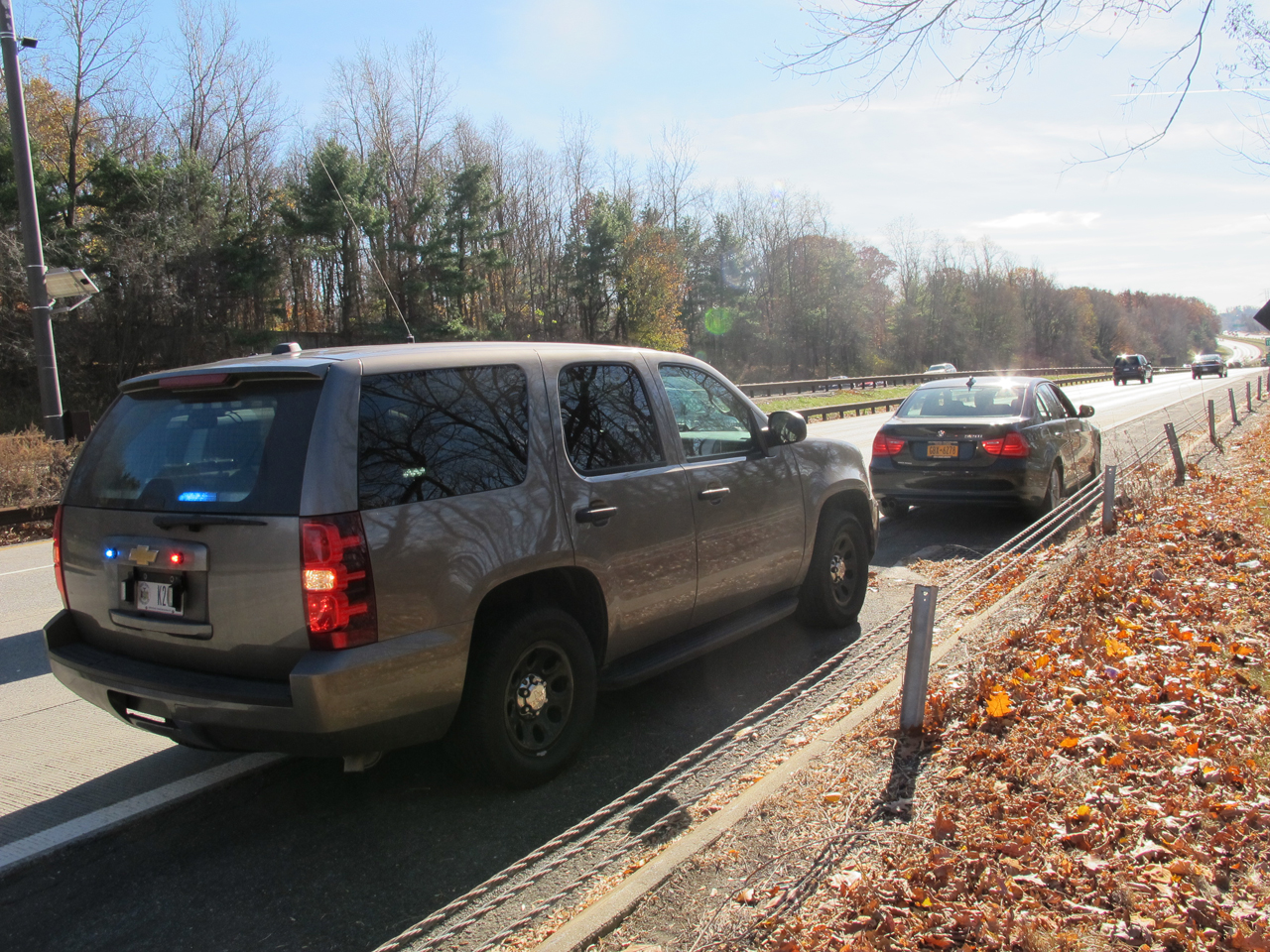 MOUNT PLEASANT, N.Y. - Even for a state trooper, it's not easy to spot drivers who are texting. Their smartphones are down on their laps, not at their ears. And they're probably not moving their lips.

That's why New York has given state police 32 tall, unmarked SUVs to better peer down at drivers' hands, part of one of the nation's most aggressive attacks on texting while driving that also includes steeper penalties and dozens of highway "Texting Zones," where motorists can pull over to use their devices.

"Look at that," Trooper Clayton Howell says, pulling alongside a black BMW while patrolling the highways north of New York City. "This guy's looking down. I can see his thumb on the phone. I think we got him."

After a quick wail of the siren and a flash of the tucked-away flashers, an accountant from the suburbs is pulled over and politely given a ticket.

New York is among 41 states that ban text messaging for all drivers and is among only 12 that prohibit using hand-held cellphones. The state this year stiffened penalties for motorists caught using hand-held devices to talk or text, increasing penalty points on the driving record from three to five, along with tickets that carry fines of up to $200.

With the tough new penalties came tougher enforcement. In a two-month crackdown this summer, troopers handed out 5,553 tickets for texting while driving, compared to 924 in the same period last year.

In New York's recent push, 91 existing rest areas and turnoffs on the state Thruway and other highways have been rebranded "Texting Zones," some advertised with blue signs declaring "It can wait. Text stop 5 miles."

"To our knowledge, New York is the first," Jonathan Adkins, deputy executive director of the Governors Highway Safety Association, said of the texting turnoffs. "It's an intriguing approach and one that we think will pay dividends and be duplicated in other states."

The National Highway Traffic Safety Administration says that at any moment during daylight hours, 660,000 drivers in the United States are texting, using cellphones or otherwise manipulating electronic devices. It says more than 3,300 people were killed and 421,000 injured in crashes caused by distracted driving last year.

Major Michael Kopy, commander of the state police troop patrolling the corridor between New York City and Albany, quoted a Virginia Tech study that found texting while driving increased the chance of a collision by 23 times and took eyes off the road for five seconds - more than the length of a football field at highway speed.

Kopy worries that as teens get their driver's licenses, texting on the road will become more prevalent. "More people are coming of driving age who have had these hand-held devices for many years, and now as they start to drive, they're putting the two together, texting and driving, when they shouldn't."

Howell's SUV, called a CITE vehicle for Concealed Identity Traffic Enforcement, is designed to catch just such drivers. Mousy gray in color, it swoops in undetected when Howell suspects a violation.

"You can see how oblivious they are to this vehicle," Howell said as a woman holding a phone paid him no mind. "I'm right next to them, and they have no idea."

The driver, a doctor, said she'd been running late and was on the phone to her office. It didn't qualify as an emergency under the rules, but she got off with a warning.

The accountant who was ticketed, Chris Pecchia, of Montrose, told Howell he hadn't been texting but rather was looking at a map displayed on his phone. He was cited anyway, for driving while using a portable electronic device.

"His story's believable, but even a GPS has to be hands-free," Howell said.

Pecchia said afterward: "I can't look at a map? What's the difference between looking at a paper map and looking at a map on the phone?"

Still, he said, he understood why the trooper pulled him over. He said he would never text while driving and has forbidden his 17-year-old daughter from doing so.

Howell pulled over a registered nurse because she had earbuds in both ears. Only one earbud is permitted while driving. She got off with a warning after explaining she was listening to her GPS's turn-by-turn directions.

"I tend to give people the benefit of the doubt," Howell said. "It's my philosophy to educate, and when you pull somebody over and give them a warning, that's a pretty good education."