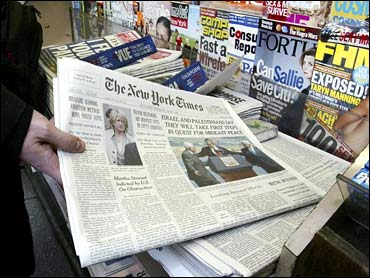 Reports of claims that Iraq had weapons of mass destruction or ties to international terrorists contained information that was unchallenged by editors and was not adequately followed up, the Times said in a lengthy editor's note that appears inside the front section of Wednesday's editions, alongside its Iraq coverage.

"In some cases, information that was controversial then, and seems questionable now, was insufficiently qualified or allowed to stand unchallenged," the newspaper said. "Looking back, we wish we had been more aggressive in re-examining the claims as new evidence emerged or failed to emerge."

The Times also said it had featured articles containing alarming claims about Iraq under Saddam Hussein more prominently than follow-up stories that countered those claims.

Many of the stories used information from Iraqi exiles and critics of Hussein who were pressing the United States to oust the Iraqi leader, but the newspaper said it did not always emphasize the informants' motivations. On two occasions, stories described claims that were never independently confirmed.

"Editors at several levels who should have been challenging reporters and pressing for more skepticism were perhaps too intent on rushing scoops into the paper," the editor's note said.

The Times said it reviewed hundreds of articles in its investigation. It posted a sampling of the stories in question on its Web site, covering issues such as hidden weapons facilities and the destruction of weapons.

Times spokeswoman Catherine Mathis told The Associated Press she could not comment on whether disciplinary action would result from the newspaper's investigation.

Nearly all the stories were published during the tenure of former Times executive editor Howell Raines, who resigned in June in the wake of the Jayson Blair scandal. Raines and former managing editor Gerald Boyd left after a Times investigation found fabrications or plagiarism in dozens of Blair's stories.