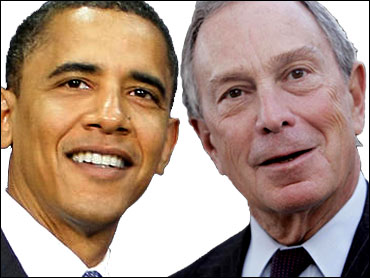 Bloomberg, mentioned as a possible vice presidential candidate for both parties, warned a Jewish group in Boca Raton, Fla., on Friday that the attempt to portray Obama as a shadowy Muslim with a hidden agenda often targets Jewish voters online and with e-mails.

The deceptive campaign against Obama, who is Christian, "threatens to undo the enormous strides that Jews and Muslims have made together in this country," the New York mayor said.

The lies are "cloaked in concern for Israel, but the real concern is about partisan politics," said Bloomberg, who is Jewish. "This is wedge politics at its worst, and we've got to reject it - loudly, clearly and unequivocally."

Bloomberg, a billionaire independent, had considered making his own run for the White House this year, but decided against it. He has said his endorsement and potential financial backing could still be up for grabs, and there has been occasional chatter about how the Democrat-turned-Republican-turned independent might make a good running mate for either Obama or Republican John McCain.

"Bloomberg has held several high-profile meetings and events with Obama throughout this campaign," said CBSNews.com senior political editor Vaughn Ververs. "His defense could help ease concerns among Jewish voters and he's someone who is seen as a potential running mate. This can't hurt those prospects."

Bloomberg's passionate defense of Obama in front of a Jewish audience in Florida could help the Illinois senator in the state, which is home to many Jewish voters. He made the remarks while Obama was on a separate, two-day campaign swing through Florida, with stops in Jacksonville and Miami.

Some have questioned Obama's commitment to Israel; this stems partly from his stated willingness to talk with leaders of rogue nations, which McCain and others have criticized as a sign he underestimates the threat posed to Israel by Iran and others in the Middle East.

There is also uneasiness about Obama among some Jewish people because his former church pastor has praised black Muslim leader Louis Farrakhan, who has made anti-Semitic remarks. Obama has disavowed his pastor and left the church.

Earlier this month in a speech to Jewish activists in Washington, Obama referred to the e-mail campaign against him as one "filled with tall tales and dire warnings."

The Muslim rumors have persisted for months, creating occasional difficulties for the campaign. At a rally in Detroit this week, Obama campaign volunteers prohibited two Muslim women who were wearing head scarves from sitting in an area behind him that would be visible in photo and video footage. One of the volunteers reportedly cited "a sensitive political climate" as the reason.

Obama later apologized to the women and said the volunteers were not carrying out campaign policy.

Bloomberg noted in his speech Friday how racial and religious tensions have cooled, and remained calm, in New York City - an achievement for which he is often praised.

One thing he has learned, Bloomberg said, is that one must speak out against those who spread "fear and stereotypes."

"That's why I'm speaking out today," he said, "and I hope all of you will join me throughout this campaign in strongly speaking out against this fear mongering, no matter who you'll be voting for."

Asked later about the potential of being a running mate, Bloomberg said "nobody's ever going to ask me" but didn't rule out accepting the No. 2 job.