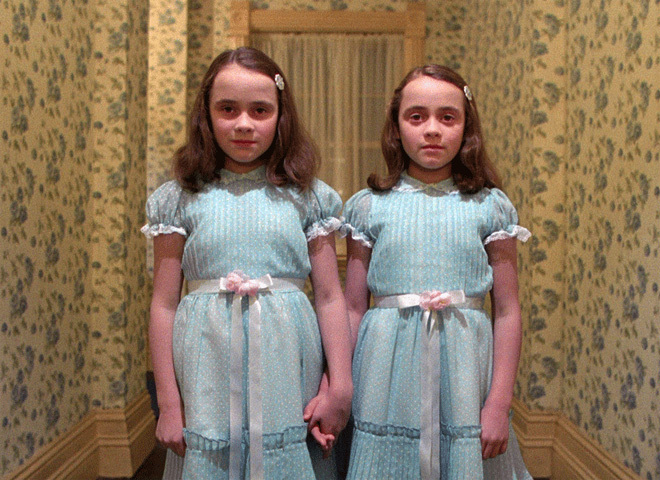 NEW YORK Some pundits scratched their heads when filmmaker Stanley Kubrick - whose resume boasted such innovative and ahead-of-the-curve classics as "Dr. Strangelove," "2001: A Space Odyssey" and "A Clockwork Orange" - announced he would direct a film version of the Stephen King horror novel "The Shining." Kubrick? A horror movie?

Of course it was more than that: A story of a devolving marriage, isolation, domestic abuse and maybe even reincarnation, as a caretaker and his family spend an eventful winter holed up at an isolated hotel high in the Rocky Mountains. Technically, it was a floating dream of unsettling cinematic precision.

In the years since its 1980 release, "The Shining" has not only haunted moviegoers - it has inspired viewers to look for hidden meanings within the film's labyrinthine plot and sets.

Unlike other films that might be burdened by continuity errors - changes in set dressings or costumes between shots, shifted furniture, awkward edits - a Kubrick film carries the weight of the director's reputation for leaving no detail untouched. They can't possibly be mistakes! And so a cottage industry has arisen of "Shining" enthusiasts who seek answers to tantalizing "clues" or "discrepancies" within the film, especially those that were added to the source novel by Kubrick and co-writer Diane Johnson.

"Room 237" - named for ground zero of the Overlook Hotel's creepy history - captures not only a fan's love for the Kubrick classic but also an obsessive's love for solving riddles, even if those riddles are imparted onto the film by a viewer's own reading of it. The film, which debuted at Sundance, is screening at the New York Film Festival in advance of its March 2013 theatrical release by IFC Films.

For example, do the many references to Indians (including a burial ground, wall hangings and cans of baking powder) convey the genocide of Native Americans? And what about those props that may refer to the Wannsee Conference and the Nazis' "final solution" against European Jews? What are they doing in a Colorado hotel?

And those who question whether Man really made it to the Moon ask: Had Kubrick been hired by NASA to clandestinely "film" the lunar landing, only to drop hints of his collaboration into a little boy's sweater?

As they say in "The X Files," the truth is out there!

For director Rodney Ascher (who snuck into a screening of "The Shining" when he was a kid and fled in terror after 20 minutes), a lifetime's obsession has been tamed only after corralling the penetrating thoughts of several "Shining" devotees: journalist Bill Blakemore; historian Geoffrey Cocks; playwright-novelist Juli Kearns; musician John Fell Ryan; and author Jay Weidner.

He then weaves their musings about the director's obsessions (and their own) into a spiral of imaginings that could make a film professor's head burst, but which any fan of Kubrick can appreciate as a kind of worship of the master's skill and dramatic genius.

"Room 237" becomes as twisting and colorful as the Overlook's carpeting . . . as manic as Jack Nicholson's performance. It is ultimately as mysterious as its subject, which in turn makes "The Shining" an even greater source of fascination and re-viewing.

Case in point: To demonstrate the symmetry of the film, a special screening of "The Shining" ran the film simultaneously backwards and forwards, creating an ingenious synchronicity of overlaid imagery. You don't have to have played "Dark Side of the Moon" during "The Wizard of Oz" to appreciate such irony.

For those eager to enter deeper into the maze ...