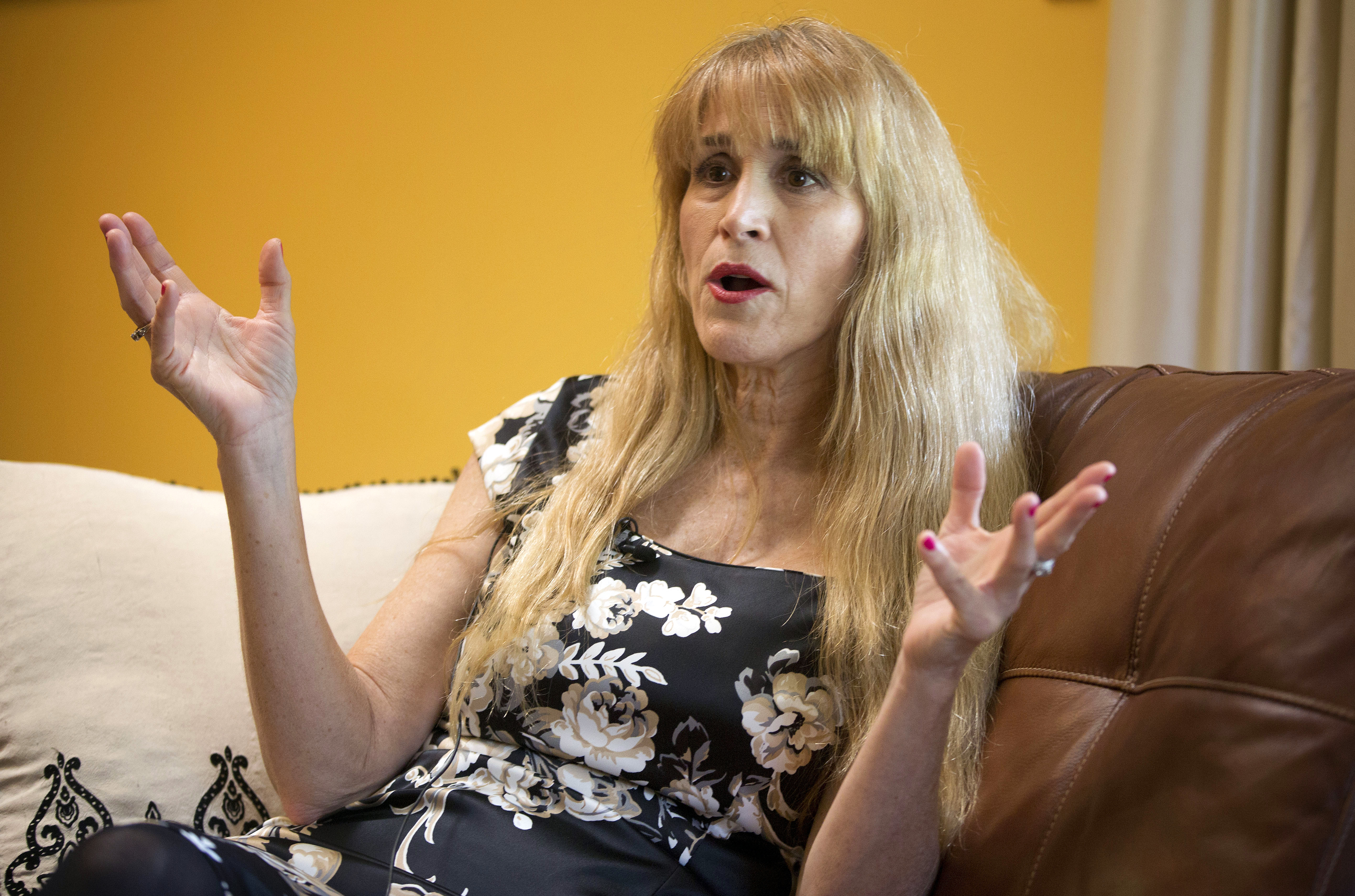 BOCA RATON, Fla. -- A Florida woman who came forward Thursday became the latest in recent weeks to say Bill Cosby gave her pills that made her feel groggy, then forced himself on her sexually.

Therese Serignese, now 57 and a nurse in Boca Raton, said the television icon raped her in 1976 when she was 19 years old following a show in Las Vegas. She said she went backstage and when the two were alone, Cosby gave her two pills and a glass of water, saying, "Take these."

"My next memory is clearly feeling drugged, being without my clothes, standing up," she said. "Bill Cosby was behind me, having sex with me."

Cosby spokesman David Brokaw did not respond to a request for comment.

Cosby's lawyer, in a statement released Sunday, criticized previous "decades-old, discredited allegations," stating that the "fact that they are being repeated does not make them true."

Separately, the New York Daily News reports that model-actress Angela Leslie, now 52, of Warren, Michigan, claims Cosby forced her to engage in a sexual act in a Las Vegas hotel room in 1992. Leslie told the newspaper Cosby tried to get her to drink a cocktail but it was too strong for her, so she didn't.

The News quotes her as saying, "The main thing I want is for people to know him for who he really is. He's not this dad of America."

Cosby attorney Martin Singer did not respond to a request for comment, the newspaper says.

In addition, the website TMZ reported Thursday that a lawyer and former actress, Louisa Moritz, is planning a civil suit against Cosby. She claims the comic sexually forced himself upon her in 1971, backstage at "The Tonight Show Starring Johnny Carson."

TMZ quoted Cosby's lawyer, Marty Singer, as saying, "We've reached a point of absurdity. The stories are getting more ridiculous."

Cosby made no mention of the allegations Thursday during a benefit performance in the Bahamas for a women's service organization. He stuck to his routine, including stories about his childhood growing up in the projects of Philadelphia. There were few empty seats in the house and a few people gave him an ovation when he finished his set.

Some in the audience said the allegations against Cosby remain unproven and they added that his performance was a benefit for what they felt was a good cause.

Dozens of Cosby's television and comedy colleagues have either refused to comment or not returned telephone calls from The Associated Press in recent days.

The allegations by Serignese and others are similar:

-- Barbara Bowman, an aspiring actress, said in a Nov. 13 Washington Post column that she was 17 and blacked out after Cosby drugged her, waking up to find herself in panties and a man's T-shirt with the television icon looming over her. She said she was certain she was raped.

-- Joan Tarshis on Monday said she was a 19-year-old who wanted to be a comedy writer when Cosby gave her a drink and forced her to perform oral sex on him.

-- Janice Dickinson on Tuesday told "Entertainment Tonight" that Cosby had given her red wine and a pill when they were together in a Lake Tahoe, California, hotel room in 1982. Singer said in a letter to the AP that Dickinson's charges were "false and outlandish."

In addition, Tamara Green wrote an opinion piece Wednesday for "Entertainment Tonight." In 2005, Green publicly claimed that she was drugged and Cosby attempted to assault her; Cosby's lawyers have previously denied they knew each other.

Singer called one of the women "the latest example of people coming out of the woodwork with fabricated or unsubstantiated stories about my client."

"People coming out of nowhere with this sort of inane yarn is what happens in a media-driven feeding frenzy," he said of another of the women.

The 77-year-old television star's attempt at a career comeback has been collapsing in recent days as the abuse allegations resurfaced. Netflix said this week it was postponing a comedy special it had planned with Cosby to air later this month; NBC said it was stopping development of a sitcom with him and TV Land pulled reruns of "The Cosby Show" off the air. Also, High Point University in North Carolina has removed Cosby from its board of advisers, the High Point Enterprise reported.

Serignese said she filed a statement with Philadelphia police in January 2005 detailing her allegations and provided a copy of that statement to The Associated Press. The AP could not confirm Thursday that a report had been filed with the Philadelphia police department. She had agreed to testify on behalf of Andrea Constand, a Pennsylvania woman who alleged that she was sexually assaulted by Cosby and settled before the case when to trial.

In an interview with the AP on Thursday, Serignese said she was standing in a Hilton gift shop when she felt someone approach her, put his arm around her and say, "Will you marry me?" When she turned around, it was Cosby. She said they had a friendly conversation and he invited her to the show.

Afterward, she said she was escorted to the green room, where she said the rape took place.

Serignese said she returned to the hotel sometime after the rape and stayed with Cosby for numerous nights, though she said she couldn't remember precisely when or for how long. She said she also cannot remember if they had sex again, but recalled other details, including an expansive penthouse suite with a sunken living room, pinball machine and Miles Davis records littered on the floor. She said she eventually thought she might be pregnant and Cosby told her to leave.

Several years later, around 1980 or 1981, she said, Cosby invited her to Lake Tahoe, saying he wanted to give her Louis Vuitton luggage, but she declined. Years after that, she said, she reached out to him when he was performing in the Detroit area, where she said she went to his hotel room after the show. She said he had encouraged her to go back to school and could not remember whether the two had sex.

Her last contact with Cosby, she said, was in 1996. She had been badly hurt in a car accident and moved to Florida to live with a sister who reached out to the comedian seeking financial support. He asked to speak with Serignese, she said, and yelled at her, asking why she was calling him after so many years.

She said Constand's attorneys agreed to represent her but she decided not to sue. An attorney involved in the civil case could not comment because of the settlement's confidentiality clause.

"There's no DNA. There's no evidence. There was no cameras. There's no videotaping back then. There's no proof," she said. "It's just my word against Bill Cosby."