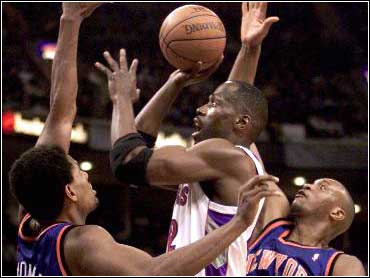 Opting for strength and experience over athleticism and potential, the Denver Nuggets acquired center Kevin Willis in a six-player trade with the Toronto Raptors on Friday.

Denver, seeking its first playoff appearance in six seasons, also received centers Aleksandar Radojevic and Garth Joseph and a second-round draft pick in either 2001 or 2002.

Going to the Raptors were shooting guard Tracy Murray and centers Mamadou N'diaye and Keon Clark. N'diaye was Denver's first-round pick last June, but never played because of a groin injury.

At 38, the 7-foot, 245-pound Willis, is 13 years older than the spindly Clark but is a better rebounder and post player who has playoff experience. He is averaging 8.8 points, 6.4 rebounds and 22 minutes this season.

"It will be a good trade for both teams," Toronto coach Lenny Wilkens said. "We're adding a player with Keon who can block shots, rebound, run the floor and defend. It gives us another young guy."

Willis also allows forward Antonio McDyess to concentrate on offense rather than worry about guarding opposing centers. The Nuggets signed Terry Davis for that role in the offseason, but he is on the injured list with tendinitis in his right Achilles'.

Playing for his sixth team in seven seasons, Willis is making $2.7 million this year and will make $3 million in the final year of his contract next season.

"He's a great guy and I really enjoyed working with him," added Wilkens, who also coached Willis with the Atlanta Hawks.

Clark, who is 6-11 but weighs only 220 pounds, has been a work in progress for Denver and his athletic ability is attractive to the Raptors. He averaged 8.6 points and 6.2 rebounds last season, but dropped to 6.5 points and 5.3 rebounds this season.

Murray averaged a career-high 16.2 points during his lone season with the Raptors in 1995-96. He scored a season-high 17 points Tuesday at Vancouver bt had been unhappy with his playing time and asked for a trade earlier this season.

The Raptors picked the 7-3, 250-pound Radojevic 12th overall in the 1999 draft. The 24-year-old center played in only three games last season and has been on the injured list with back problems all this season.

Joseph has appeared in only two games this season. He was placed on the injured list with a strained groin on Dec. 14.