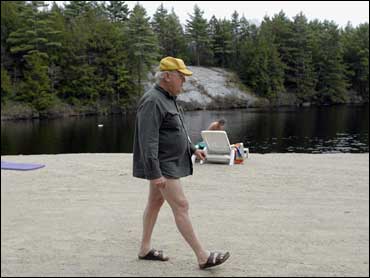 Here's the naked truth about nude recreation: The people who practice it aren't getting any younger.

To draw 20- and 30-somethings, nudist groups and camps are trying everything from deep discounts on membership fees to a young ambassador program that encourages college and graduate students to talk to their peers about having fun in the buff.

"We don't want the place to turn into a gated assisted living facility," said Gordon Adams, membership director at Solair Recreation League, a nudist camp in northeastern Connecticut that recently invited students from dozens of New England schools to a college day in hopes of piquing their interest.

The Kissimee, Fla.-based American Association for Nude Recreation, which represents about 270 clubs and resorts in North America, estimates that more than 90 percent of its 50,000 members are older than 35.

"If a young person is enlightened enough to go to a beach or resort, they'll find that they're outnumbered by people who are not like them," said Sam Miller, 32, a medical student in Riverside, Calif., who is helping to plan a youth ambassadors workshop being held next month in Orlando, Fla. "Oftentimes they won't go back for that reason."

No one is quite sure why nudity, at least the organized version promoted by the AANR and similar groups, is such a tough sell for younger people.

"I think people think that we're all hippies," said Laura Groezinger, 22, of Billerica, Mass., who grew up visiting Solair with her family. "Other people, I don't know the right way to say this, but they think it's more sexual, kind of. They don't understand just the being free with your body and being comfortable."

Money is also an issue. As nudist resorts become increasingly upscale, catering to baby boomers and retirees with plenty of disposable income, they're less affordable for college students and young families.

"There's a financial barrier, and I think it's important for resorts, if they want young people around, to recognize that and cater to them with discounts or free days," Miller said.

Only a handful of students attended Solair's recent college event, held on an overcast 60-degree day that prompted many to bundle up in sweaters rather than shed their clothes. But camp members such as Robyn Maguire, 27, of Manchester, Conn., said they plan to try again.

"I hope to get the word out to younger people that hey, it is OK, and here's a safe place to be, a very accepting place," Maguire said. "Unlike any other place in life, people actually look at you when they talk to you."