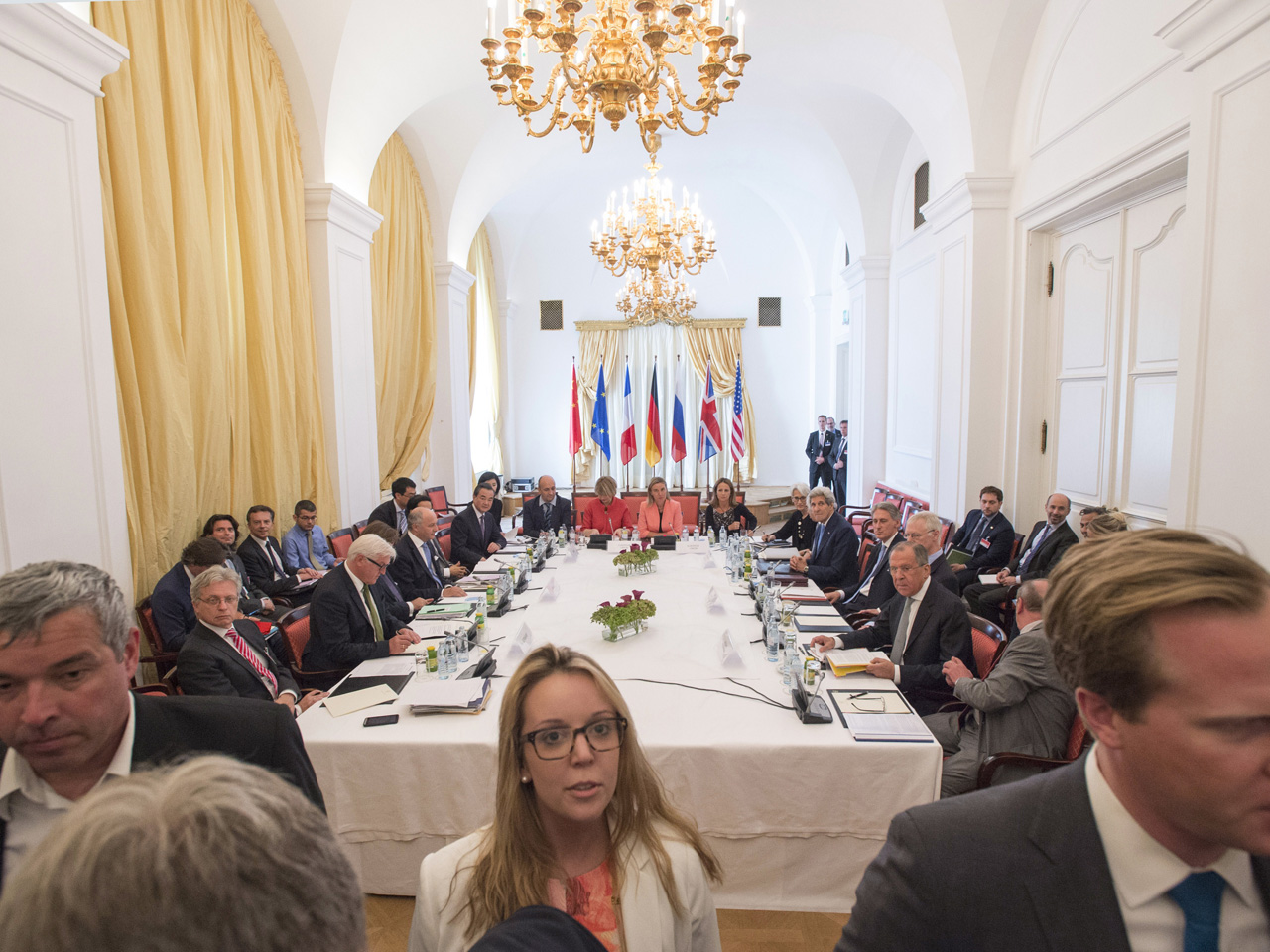 VIENNA - A day before the new deadline for a nuclear accord, Iran pushed Monday to lift the U.N. arms embargo on the country as a parallel deal - a demand that the United States opposes as it seeks to limit Tehran's Mideast clout.

Speaking on the eve of a belated target date for a complete agreement, a senior Iranian official said his country and the six world powers it is negotiating with are also working on a U.N. resolution that endorses any future nuclear deal.

CBS News correspondent Margaret Brennan reports that the pace of talks has been slowing as the July 7 deadline near. There has, however, been significant headway made on the topics of sanctions, as well as the possibility of an investigation into whether Iran has already tried to make a nuclear weapon.

Lifting the arms embargo would be separate from a long-term accord that foresees limits on Iran's nuclear programs in exchange for relief from crippling sanctions on the Islamic Republic. But Iran also sees existing U.N. resolutions imposed on Iran's nuclear program and the accompanying sanctions as unjust and illegal. It has insisted that those resolutions be lifted since the start of international negotiations nearly a decade ago to limit its nuclear-arms making capability.

After world powers and Iran reached a framework pact in April, the U.S. said "important restrictions on conventional arms and ballistic missiles" would be incorporated in any new U.N. guidelines for Iran.

Negotiators and some foreign ministers of the six world powers plus Iran gathered in Vienna to complete a comprehensive nuclear deal by June 30. When they couldn't reach agreement by then, they agreed to extend the deadline to July 7. But many core issues remain, and an announcement on Tuesday is unlikely.

While the discussions have been focused on uranium stockpiles and the timing for lifting economic sanctions, Iran's long-standing desire to have the arms embargo lifted at the signing of a deal is another wrinkle thrown into the mix.

Russia and China have expressed support for lifting the embargo, which was imposed in 2007 as part of a series of penalties over its nuclear program.

But the U.S. doesn't want the arms ban ended because it could allow Tehran to expand its military assistance to Syrian President Bashar Assad's embattled government, for the Houthi rebels in Yemen and Hezbollah in Lebanon. It also would increase already stalwart opposition to the deal in Congress and in Israel.

Lifting the embargo is "one of the important issues we are discussing," said the Iranian official, who briefed reporters on the status of the talks in Vienna on condition he not be quoted by name. "There should not be any place for the arms embargo."

Iran wants to have a hand in shaping any Security Council resolution endorsing a comprehensive nuclear deal, the official added. He offered no details, but said Iran is interested in wording that shifts the critical tone of previous resolutions passed over Tehran's nuclear program.

The Iranian official spoke of good progress on some issues. But at the same time, he said some disputes may have to be resolved by the foreign ministers of Iran, the United States, Russia, China, Britain, France and Germany. All seven were either in Vienna by Monday or planned to arrive during the day.

It was unclear if even the added diplomatic muscle would lead to a pact. On the ninth day of talks Sunday, U.S. Secretary of State John Kerry said the negotiations "could go either way."

"If the hard choices get made in the next couple of days, and made quickly, we could get an agreement this week," Kerry said. "But if they are not made, we will not."

The talks had appeared to be moving forward. Over the weekend, diplomats reported tentative agreement on the speed and scope of sanctions relief for Iran in the accord, even as issues such as inspection guidelines and limits on Iran's nuclear research and development remained contentious.

Tuesday's deadline is the latest that has been set for a comprehensive pact that would replace the interim deal world powers and Iran reached in November 2013. That package was extended three times, most recently on June 30.