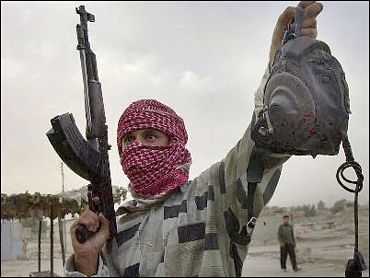 Shiite militiamen fired several mortar shells at a U.S. base in Najaf early Tuesday and at a city hall guarded by Bulgarian troops in another Shiite city.

The sporadic overnight shelling of the U.S. base in Najaf followed intense attacks Monday by militiamen loyal to radical cleric Muqtada al-Sadr, who pounded the base with mortars and fired rifles and machine guns. No U.S. soldiers were killed in either attack. U.S. officers estimate about 20 Iraqis were killed by U.S. retaliatory fire.

In Karbala, 50 miles north of Najaf, the city hall and the police headquarters, which are guarded by Bulgarian soldiers, came under mortar fire before dawn Tuesday, Bulgarian Defense Ministry spokeswoman Rumyana Strugareva said.

No casualties or damage were reported after that attack which lasted about ten minutes. Al-Sadr's forces have battled coalition troops since the occupation authorities sought his arrest last month for the killing of a rival cleric last year.