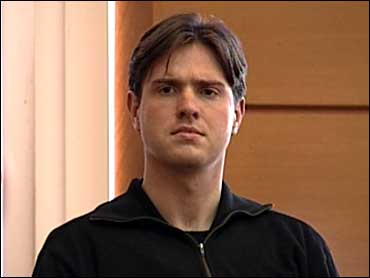 A British man accused of killing his wife and infant daughter in their Massachusetts home and then fleeing the country pleaded not guilty Tuesday to murder.

Neil Entwistle, 27, is charged with two counts of murder and firearms charges in the Jan. 20 slayings of his wife, Rachel, 27, and their daughter, Lillian Rose, who would have turned 1 on Sunday.

Prosecutors allege he shot them in their $2,700-a-month rented home in Hopkinton, a suburb of Boston, after racking up tens of thousands of dollars in debts and becoming dissatisfied with his sex life.

He stood silent as his lawyer asked the judge to enter a not guilty plea to all counts, including murder and weapons charges.

Entwistle has been held without bail in a Cambridge jail since he was originally arraigned in Framingham District Court on Feb. 16. His indictment on March 28 moved the case to Middlesex Superior Court, where he was arraigned Tuesday.

Rachel Entwistle's mother and stepfather, Priscilla and Joseph Matterazzo, and about a dozen friends and family members watched the short proceedings.

The case has drawn attention here and in Britain, where Neil Entwistle grew up. Entwistle flew to his parents' home in England the day after his family was killed.

"They miss Rachel and Lillian Rose every minute of every day," said family spokesman Joseph Flaherty. "It doesn't bring them any comfort to see him standing there and know that their daughter and granddaughter are gone."

Entwistle's attorney, Elliot Weinstein, said intense media coverage of the case here and in Britain has been unfair to Entwistle.

"It is absolutely impossible for Neil Entwistle to receive a fair trial," he said after the arraignment.

According to investigators, Entwistle did research online about ways to kill people and how to commit suicide. Investigators say he may have planned to kill himself after the killings but couldn't go through with it. He also trolled the Internet for escort services, according to court documents.

Prosecutors said Entwistle used his father-in-law's .22-caliber handgun, then drove 50 miles to his in-laws' home in Carver to return the weapon before flying to Britain.

The bodies of Rachel and Lillian Entwistle were found the next day, lying together in bed under a thick comforter. Entwistle allegedly told a state police detective that he found the bodies when he returned home from doing errands.

A hearing in the case was scheduled for May 23. Superior Court Judge Peter Lauriat set a goal of starting the trial by April 2007.