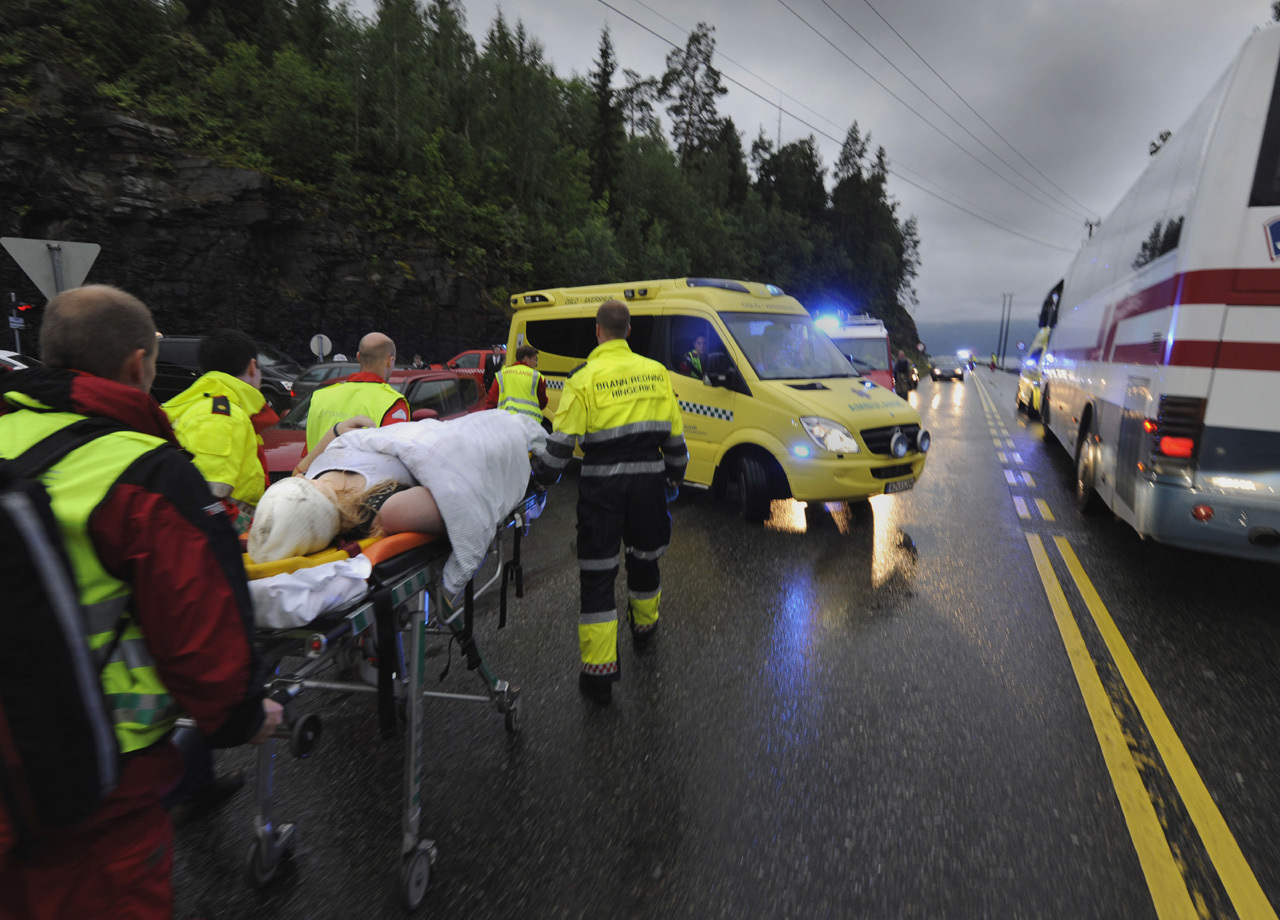 OSLO, Norway — A gunman who opened fire on an island teeming with young people kept shooting for 1.5 hours before surrendering to a SWAT team, which arrived 40 minutes after they were called, police said Saturday.

Survivors of the shooting spree have described hiding and fleeing into the water to escape the gunman, but a police briefing Saturday detailed for the first time how long the terror lasted — and how long victims waited for help.

When the SWAT team did arrive, the gunman, who was carrying a pistol and an automatic weapon, surrendered, said Police Chief Sveinung Sponheim.

"There were problems with transport to Utoya," where the youth-wing of Norway's left-leaning Labor Party was holding a retreat, Sponheim said. "It was difficult to get a hold of boats."

At least 85 people were killed on the island, but police said four or five people remain missing.

Divers have been searching the surrounding waters, and Sponheim said the missing may have drowned. Police earlier said there was an unexploded device on the island, but it later turned out to be fake.

The attack followed a car bomb outside a government building in Oslo, where another seven people were killed. Police are still digging through rubble there, and Sponheim said there are still body parts in the building.

Police have not identified the suspect, but Norwegian national broadcaster NRK say he is Anders Behring Breivik (left). They have said only that they have charged a 32-year-old under Norway's terror law. He will be arraigned on Monday when a court decides whether police can continue to hold him as the investigation continues.

Authorities have not given a motive for the attacks, but both were in areas connected to the Labor Party, which leads a coalition government.

Even police confessed to not knowing much about the suspect, but details trickled out about him all day: He had ties to a right-leaning political party, he posted on Christian fundamentalist websites, and he rented a farm where he amassed six tons of fertilizer.

Who is man in custody in Norway carnage?
Police: Norway suspect a right-wing extremist

Police said the suspect is talking to them and has admitted to firing weapons on the island. It was not clear if he had confessed to anything else he is accused of. Police said he retained a lawyer, but the attorney did not want to be identified.

"He has had a dialogue with the police the whole time, but he's a very demanding suspect," Sponheim said.

Earlier in the day, a farm supply store said it had alerted police that he bought six tons of fertilizer, which is highly explosive and can be used in homemade bombs.

Police and soldiers were searching for evidence and potential bombs at the farm South of Oslo on Saturday. Havard Nordhagen Olsen, a neighbor, told The Associated Press that Breivik moved in about one month ago, just next to his house and said he seemed like "a regular guy."

Olsen said he recognized his neighbor in the newspapers this morning and admitted to "being under shock."

Meanwhile, Mazyar Keshvari, a spokesman for Norway's Progress Party — which is conservative but within the political mainstream — said that the suspect was a paying member of the party's youth wing from 1999 to 2004.

In all, 92 people have been killed in what Prime Minister Jens Stoltenberg said was peacetime Norway's deadliest day. The Oslo University hospital said it has so far received 11 wounded from the bombing and 19 people from the camp shooting.

Gun violence is rare in Norway, where the average policeman patrolling in the streets doesn't carry a firearm. Reports that the assailant was motivated by political ideology were shocking to many Norwegians, who pride themselves on the openness of their society. Indeed, Norway is almost synonymous with the kind of free expression being exercised by the youth at the political retreat.

The monarch, his wife and the prime minister led the nation in mourning, visiting grieving relatives of the scores of youth gunned down. Buildings around the capital lowered their flags to half-staff. People streamed to Oslo Cathedral to light candles and lay flowers; outside, mourners began building a makeshift altar from dug-up cobblestones. The Army patrolled the streets of the capital, a highly unusual sight for this normally placid country.

The city center was a sea of roadblocks Saturday, with groups of people peering over the barricades wherever they sprang up, as the shell-shocked Nordic nation was gripped by reports that the gunman may not have acted alone. Police have not confirmed a second assailant but said they are investigating witness reports.

The queen and the prime minister hugged when they arrived at the hotel where families are waiting to identify the bodies. Both king and queen shook hands with mourners, while the prime minister, his voice trembling, told reporters of the harrowing stories survivors had recounted to him.

On the island of Utoya, panicked teens attending a Labour Party youth wing summer camp plunged into the water or played dead to avoid the assailant in the assault. A picture sent out on Twitter showed a blurry figure in dark clothing pointing a gun into the water, with bodies all around him.

The carnage began Friday afternoon in Oslo, when a bomb rocked the heart of Norway. About two hours later, the shootings began at the youth retreat, according to a police official. The official spoke on condition of anonymity because that information had not been officially released by Norway's police.

The blast in Oslo, Norway's capital and the city where the Nobel Peace Prize is awarded, left a square covered in twisted metal, shattered glass and documents expelled from surrounding buildings.

The dust-clogged scene after the blast reminded one visitor from New York of Sept. 11. People were "just covered in rubble," walking through "a fog of debris," said Ian Dutton, who was in a nearby hotel.

Asked whether all victims at Utoya died from gunshot wounds or if some had drowned, Stoere, the foreign minister, said "you will likely see a combination."

A 15-year-old camper named Elise who was on Utoya said she heard gunshots, but then saw a police officer and thought she was safe. Then he started shooting people right before her eyes.

"I saw many dead people," said Elise, who didn't want to disclose her last name. "He first shot people on the island. Afterward he started shooting people in the water."

Elise said she hid behind the same rock that the killer was standing on. "I could hear his breathing from the top of the rock," she said.

She said it was impossible to say how many minutes passed while she was waiting for him to stop.

At a hotel in the village of Sundvollen, where survivors of the shooting were taken, 21-year-old Dana Berzingi wore pants stained with blood. He said the fake police officer ordered people to come closer, then pulled weapons and ammunition from a bag and started shooting.

Several victims "had pretended they were dead to survive," Berzingi said. But after shooting the victims with one gun, the gunman shot them again in the head with a shotgun, he said.

"I lost several friends," said Berzingi, who used the cell phone of one of those friends to call police.

An official, who spoke on condition of anonymity, said the attack "is probably more Norway's Oklahoma City than it is Norway's World Trade Center." Domestic terrorists carried out the 1995 attack on a federal building in Oklahoma City, while foreign terrorists were responsible for the Sept. 11, 2001 attacks.

Aerial images broadcast by Norway's TV2 showed members of a SWAT team dressed in black arriving at the island in boats and running up the dock. People who had stripped down to their underwear moved in the opposite direction, swimming away from the island toward the mainland, some using flotation devices.

"It's a reminder that the entire international community has a stake in preventing this kind of terror from occurring," President Barack Obama said.

Obama extended his condolences to Norway's people and offered U.S. assistance with the investigation. He said he remembered how warmly Norwegians treated him in Oslo when he accepted the Nobel Peace Prize in 2009.

Britain's Queen Elizabeth II wrote to Norway's King Harald to offer her condolences and express her shock and sadness at the shooting attacks in his country.

A U.S. counterterrorism official said the United States knew of no links to terrorist groups and early indications were the attack was domestic. The official spoke on condition of anonymity because the investigation was being handled by Norway.