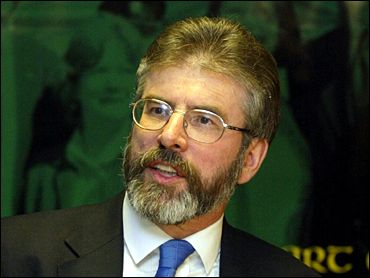 In an unexpected diplomatic defeat, Britain and Ireland on Thursday postponed issuing their plan for promoting Northern Ireland's peace accord and reviving a power-sharing government.

Irish Prime Minister Bertie Ahern announced in Dublin that the two governments "have decided that insufficient progress has been made in their dealings with the parties for their meeting at Hillsborough (Castle near Belfast) to go ahead."

The statement from Ahern's office said he would meet British Prime Minister Tony Blair in London to review how to break the deadlock. Blair's Downing Street office confirmed the setback.

The two prime ministers hoped to unveil a detailed document outlining what each player in Northern Ireland's peace process must do to salvage key goals of the 1998 Good Friday accord.

Much depended on a clear-cut response from the Irish Republican Army, which is under mounting international pressure to renounce violence and fully disarm.

Hours before the Anglo-Irish retreat, the IRA-linked Sinn Fein party warned that the prime ministers' apparent demands for public IRA disarmament and other clear-cut commitments would be impossible to meet.

Blair and Ahern have been working on the plan since October, when an IRA spying scandal brought down the province's Catholic-Protestant administration, a key achievement of the landmark deal.

British officials have indicated that Blair intends to promise substantial cuts in troop levels and bases in the British province in the emerging plan — but only if Sinn Fein can guarantee a sufficient new peacemaking move from the IRA in return. That hope, they suggested on condition of anonymity, had yet to materialize.

Other proposed British commitments include reforming the powers of Northern Ireland's judiciary, developing a Northern Ireland Bill of Rights and creating a system allowing about 30 wanted IRA fugitives to avoid jail time.

Britain has withdrawn about a third of its troops since 1998, leaving about 13,000 — half of them locally recruited Protestants.

But such offers would come at a price that the IRA, until now, has been unwilling to pay — the group's total abandonment of all activity.

Sinn Fein chairman Mitchel McLaughlin warned that the IRA could not accept two key concessions reportedly demanded by Blair and Ahern: that the IRA scrap arms in front of television cameras and that Sinn Fein's right to hold office be tied to the IRA's future good behavior.

"If there is a demand that the IRA carries out an act of decommissioning in public, or there is an attempt to insert an exclusion clause into the process, then those could be deal-breakers," McLaughlin said.

The IRA largely has been observing a 1997 cease-fire, but the governments insist the time has come to demonstrate that the outlawed group's truce will be permanent, not open-ended.

The 1998 peace deal envisioned that the IRA would disarm fully by mid-2000. Police estimate the group retains about 100 tons of weaponry, largely supplied by Libya in the mid-1980s and now hidden in the neighboring Republic of Ireland.

Britain and Ireland agree that dramatic IRA moves are the only way to revive the Protestant-Catholic administration that gained power in December 1999.

The major Protestant party, the Ulster Unionists, faces potential electoral disaster in Northern Ireland's legislative elections scheduled for May 29 — elections Britain already has postponed once in hopes of winning an IRA peace move. If Protestant extremists fare well in that election, they could block the formation of any new power-sharing administration.

The Ulster Unionists agreed to share power with Sinn Fein in a four-party coalition on condition that the IRA disarmed fully.

Protestant opposition to Ulster Unionist chief David Trimble has grown as police linked the IRA to a list of hostile activities, culminating in last October's spy scandal. Police have charged four people, including Sinn Fein's top legislative aide, with collecting confidential documents of use to the IRA.