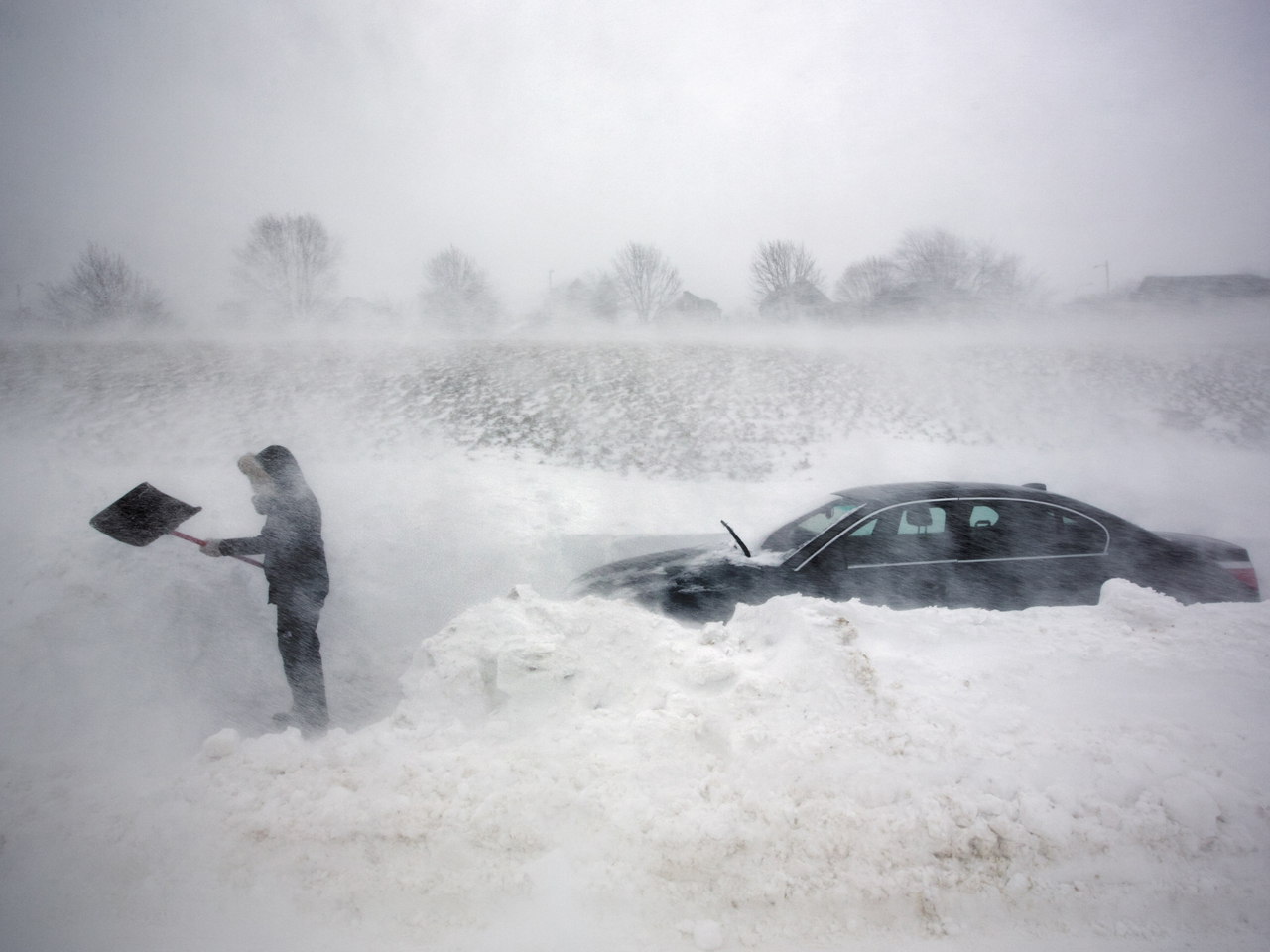 PROVIDENCE, R.I. Emergency crews and residents struggled to clear roadways and sidewalks from a storm that rampaged through the Northeast, dumping up to 3 feet of snow and bringing howling winds that knocked out power to hundreds of thousands.

Municipal workers from New York to Boston labored through the night Saturday in snow-bound communities, where some motorists had to be rescued after spending hours stuck in wet, heavy snow. Meanwhile, utilities in some hard-hit New England states predicted that Friday's storm could leave some customers in the dark at least until Monday.

"We've never seen anything like this," said Suffolk County Executive Steven Bellone of Long Island, which got more than 2.5 feet of snow.

About 345,000 homes and businesses remained without power Sunday morning, down from a total of about 650,000. Some school districts announced they'd be closed on Monday, complicating parents' back to work schedules but giving kids another day for frolicking.

At least five deaths in the U.S. were blamed on the snowstorm, including an 11-year-old boy in Boston who was overcome by carbon monoxide as he sat in a running car to keep warm while his father shoveled Saturday morning. That death and the illnesses of several others exposed to carbon monoxide set off a flurry of safety warnings from public officials.

Roads across the Northeast were impassable and cars were entombed by snow drifts on Saturday.

On the Long Island Expressway, people who were commuting home Friday evening became stranded as the storm rapidly picked up in intensity, officials said.

Some drivers spent up to 12 hours trapped in their cars on the roadway until Army canvas trucks could ferry them to safety.

Other people found the snow packed so high against their homes they couldn't get their doors open.

"It's like lifting cement. They say it's 2 feet, but I think it's more like 3 feet," said Michael Levesque, who was shoveling snow in Quincy, Mass., for a landscaping company.

In Providence, where the drifts were 5 feet high and telephone lines encrusted with ice and snow drooped under the weight, Jason Harrison labored for nearly three hours to clear his blocked driveway and front walk and still had more work to do.

Rhode Island Gov. Lincoln Chafee cautioned that while the snow had stopped, the danger hadn't passed: "People need to take this storm seriously, even after it's over. If you have any kind of heart condition, be careful with the shoveling."

Blowing with hurricane-force winds of more than 80 mph in places, the storm hit hard along the heavily populated Interstate 95 corridor between New York City and Maine. Milford., Conn., got 38 inches of snow, and Portland, Maine, recorded 31.9, shattering a 1979 record. Several communities in New York and across New England got more than 2 feet.

Still, the storm was not as bad as some of the forecasts led many to fear, and not as dire as the Blizzard of '78, used by longtime New Englanders as the benchmark by which all other winter storms are measured.

By midday Saturday, the National Weather Service reported preliminary snowfall totals of 24.9 inches in Boston, or fifth on the city's all-time list. Bradley Airport near Hartford, Conn., got 22 inches, for the No. 2 spot in the record books there.

Concord, N.H., got 24 inches of snow, the second-highest amount on record and a few inches short of the reading from the great Blizzard of 1888.

In New York, where Central Park recorded 11 inches, not even enough to make the Top 10 list, Mayor Michael Bloomberg said the city "dodged a bullet" and its streets were "in great shape." The three major airports — LaGuardia, Kennedy and Newark, N.J. — were up and running by late morning after shutting down the evening before.

Most of the power outages were in Massachusetts, where at its peak more than 400,000 homes and businesses were left in the dark. In Rhode Island, a high of around 180,000 customers lost power, or about one-third of the state.

Connecticut crews had slowly whittled down the outage total from a high of about 38,000 to about 25,000 Sunday, and power was restored to nearly all of the more than 15,000 in Maine and New Hampshire who were left without lights after the storm hit.

Massachusetts, Connecticut and Rhode Island imposed travel bans until 4 p.m. to keep cars off the road and let plows do their work, and the National Guard helped clear highways in Connecticut, where more than 240 auto accidents were reported. The Guardsmen rescued about 90 motorists, including a few who had hypothermia and were taken to hospitals.

On Long Island, hundreds of drivers spent a cold and scary night stuck on the highways. Even snowplows got bogged down or were blocked by stuck cars, so emergency workers used snowmobiles to try to reach motorists, many of whom were still waiting to be rescued hours after the snow had stopped.

Richard Ebbrecht, a chiropractor, left his office in Brooklyn at 3 p.m. on Friday and headed for home in Middle Island, N.Y., but got stuck six or seven times on the Long Island Expressway and other roads.

"There was a bunch of us Long Islanders. We were all helping each other, shoveling, pushing," he said. He finally gave up and settled in for the night in his car just two miles from his destination. At 8 a.m., when it was light out, he walked home.

"I could run my car and keep the heat on and listen to the radio a little bit," he said. "It was very icy under my car. That's why my car is still there."

Around the New York metropolitan area, many victims of Superstorm Sandy were mercifully spared another round of flooding, property damage and power failures.

"I was very lucky and I never even lost power," said Susan Kelly of Bayville. "We were dry as anything. My new roof was fantastic. Other than digging out, this storm was a nice storm." As for the shoveling, "I got two hours of exercise."

At New York's Fashion Week, women tottered on 4-inch heels through the snow to get to the tents to see designers' newest collections.

Across much of New England, streets were empty of cars and dotted instead with children who had never seen so much snow and were jumping into snow banks and making forts. Snow was waist-high in the streets of Boston. Plows made some thoroughfares passable but piled even more snow on cars parked on the city's narrow streets.

Life went on as usual for some. In Portland, Karen Willis Beal got her dream wedding on Saturday — complete with a snowstorm just like the one that hit before her parents married in December 1970.

"I have always wanted a snowstorm for my wedding, and my wish has come true to the max," she said.

In Massachusetts, the National Guard and Worcester emergency workers teamed up to deliver a baby at the height of the storm at the family's home. Everyone was fine.

Some spots in Massachusetts had to be evacuated because of coastal flooding, including Salisbury Beach, where around 40 people were ordered out.

Among them were Ed and Nancy Bemis, who heard waves crashing and rolling underneath their home, which sits on stilts. At one point, Ed Bemis went outside to take pictures, and a wave came up, blew out their door and knocked down his wife.

"The objects were flying everywhere. If you went in there, it looks like ... two big guys got in a big, big fight. It tore the doors right off their hinges. It's a mess," he said.