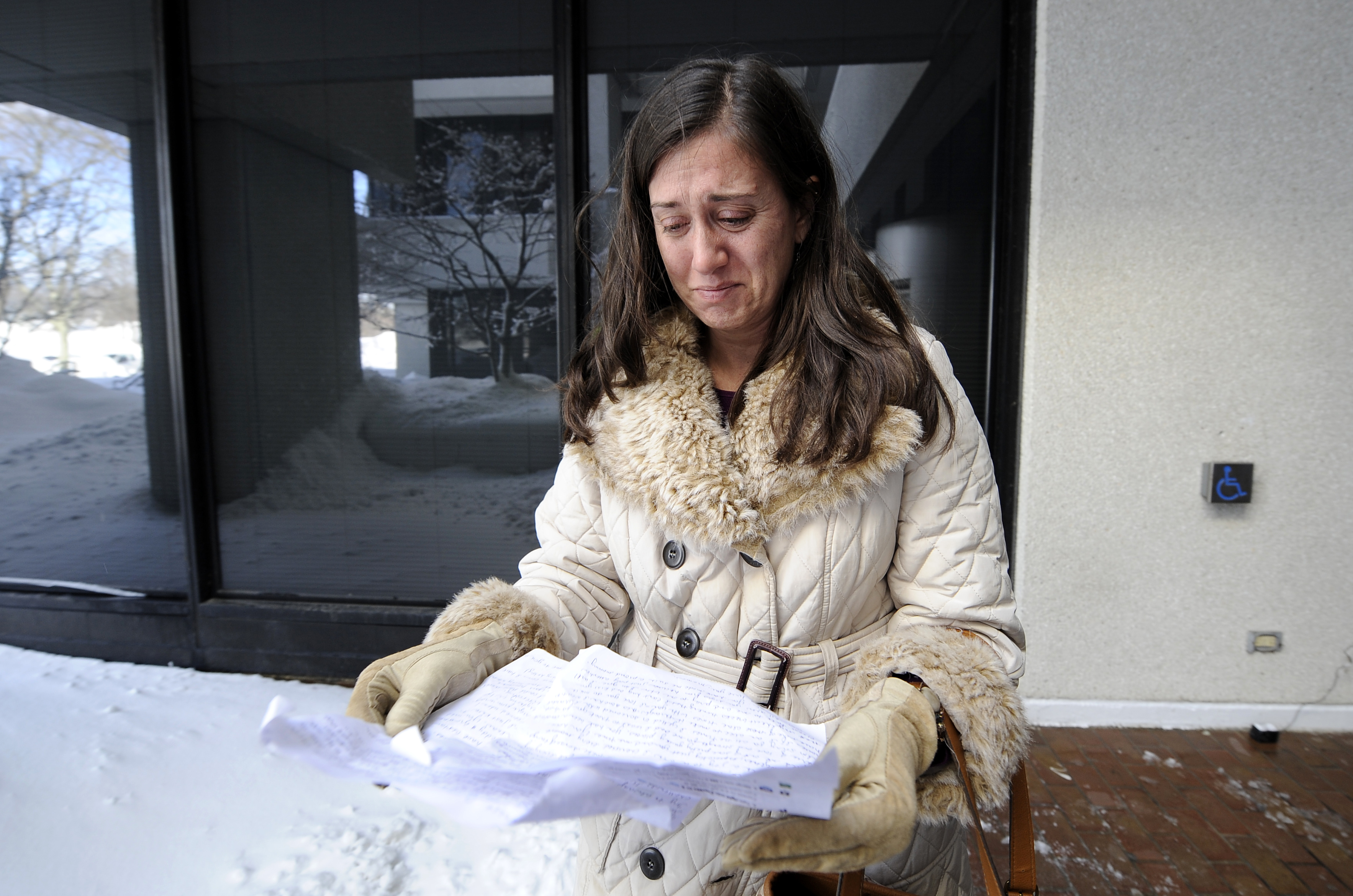 FARMINGVILLE, N.Y. Stranded for hours on a snow-covered road, Priscilla Arena prayed, took out a sheet of loose-leaf paper and wrote what she thought might be her last words to her husband and children.

She told her 9 1/2-year-old daughter, Sophia, she was "picture-perfect beautiful." And she advised her 5 ½-year-old son, John: "Remember all the things that mommy taught you. Never say you hate someone you love. Take pride in the things you do, especially your family. ... Don't get angry at the small things; it's a waste of precious time and energy. Realize that all people are different, but most people are good. "

"My love will never die — remember, always," she added.

Arena, who was rescued in an Army canvas truck after about 12 hours, was one of hundreds of drivers who spent a fearful, chilly night stuck on highways in a blizzard that plastered New York's Long Island with more than 30 inches of snow, its ferocity taking many by surprise despite warnings to stay off the roads.

Even plows were mired in the snow or blocked by stuck cars, so emergency workers had to resort to snowmobiles to try to reach motorists. Four-wheel-drive vehicles, tractor-trailers and a couple of ambulances could be seen stranded along the roadway and ramps of the Long Island Expressway. Stuck drivers peeked out from time to time, running their cars intermittently to warm up as they waited for help.

With many still stranded hours after the snow stopped, Gov. Andrew Cuomo urged other communities to send plows to help dig out in eastern Long Island, which took the state's hardest hit by far in the massive Northeast storm.

In Connecticut, where the storm dumped more than 3 feet of snow in some places, the National Guard rescued about 90 stranded motorists, taking a few to hospitals with hypothermia.

The scenes came almost exactly two years after a blizzard marooned at least 1,500 cars and buses on Chicago's iconic Lake Shore Drive, leaving hundreds of people shivering in their vehicles for as long as 12 hours and questioning why the city didn't close the crucial thoroughfare earlier.

Cuomo and other officials were similarly asked why they didn't act to shut down major highways in Long Island in advance of the storm, especially given the sprawling area's reputation for gridlock. The expressway is often called "the world's longest parking lot."

"The snow just swallowed them up. It came down so hard and so fast," explained Suffolk County Executive Steven Bellone.

"That's not an easy call," added Cuomo, who noted that people wanted to get home and that officials had warned them to take precautions because the worst of the snow could start by the evening rush hour. Flashing highway signs underscored the message ahead of time: "Heavy Snow Expected. Avoid PM Travel!"

"People need to act responsibly in these situations," Cuomo said.

But many workers didn't have the option of taking off early Friday, Arena noted. The 41-year-old sales account manager headed home from an optical supply business in Ronkonkoma around 4 p.m. She soon found her SUV stuck along a road in nearby Farmingville.

"Even though we would dig ourselves out and push forward, the snow kept piling, and therefore we all got stuck, all of us," she recalled later at Brookhaven Town Hall, where several dozen stranded motorists were taken after being rescued. Many others opted to stay with their cars.

Richard Ebbrecht left his Brooklyn chiropractic office around 3 p.m. for his home in Middle Island, about 60 miles away, calculating that he could make the drive home before the worst of the blizzard set in. He was wrong.

As the snow came rushing down faster than he'd foreseen, he got stuck six or seven times on the expressway and on other roads. Drivers began helping each other shovel and push, he said, but to no avail. He finally gave up and spent the night in his car on a local thoroughfare, only about two miles from his home.

"I could run my car and keep the heat on and listen to the radio a little bit," he said.

He walked home around at 8 a.m., leaving his car.

Late-shifters including Wayne Jingo had little choice but to risk it if they wanted to get home. By early afternoon, he'd been stuck in his pickup truck alongside the Long Island Expressway for nearly 12 hours.

He'd left his job around midnight as a postal worker at Kennedy Airport and headed home to Medford, about 50 miles east. He was at an exit in Ronkonkoma — almost home — around 1:45 a.m. when another driver came barreling at him westbound, the wrong way, he said. Jingo swerved to avoid the oncoming car, missed the exit and ended up stuck on the highway's grass shoulder.

He rocked the truck back and forth to try to free it, but it only sank down deeper into the snow and shredded one of his tires. He called 911. A police officer came by at 9:30 a.m. and said he would send a tow truck.

"I would have been fine if I didn't have to swerve," he said.

In Middle Island, a Wal-Mart remained unofficially open long past midnight to accommodate more than two dozen motorists who were stranded on nearby roads.

"We're here to mind the store, but we can't let people freeze out there," manager Jerry Greek told Newsday.

While the expressway eventually opened Saturday, about 30 miles of the highway was to be closed again Sunday for snow removal.

Susan Cassara left her job at a Middle Island day care center around 6:30 p.m., after driving some of the children home because their parents couldn't get there to pick them up.

She got stuck on one road until about 2:30 a.m. Then a plow helped her get out — but she got stuck again, she said. Finally, an Army National Guardsman got to her on a snowmobile after 4 a.m.

"It was so cool. Strapped on, held on and came all the way here" to the makeshift shelter at the Brookhaven Town Hall, she said. "Something for my bucket list."