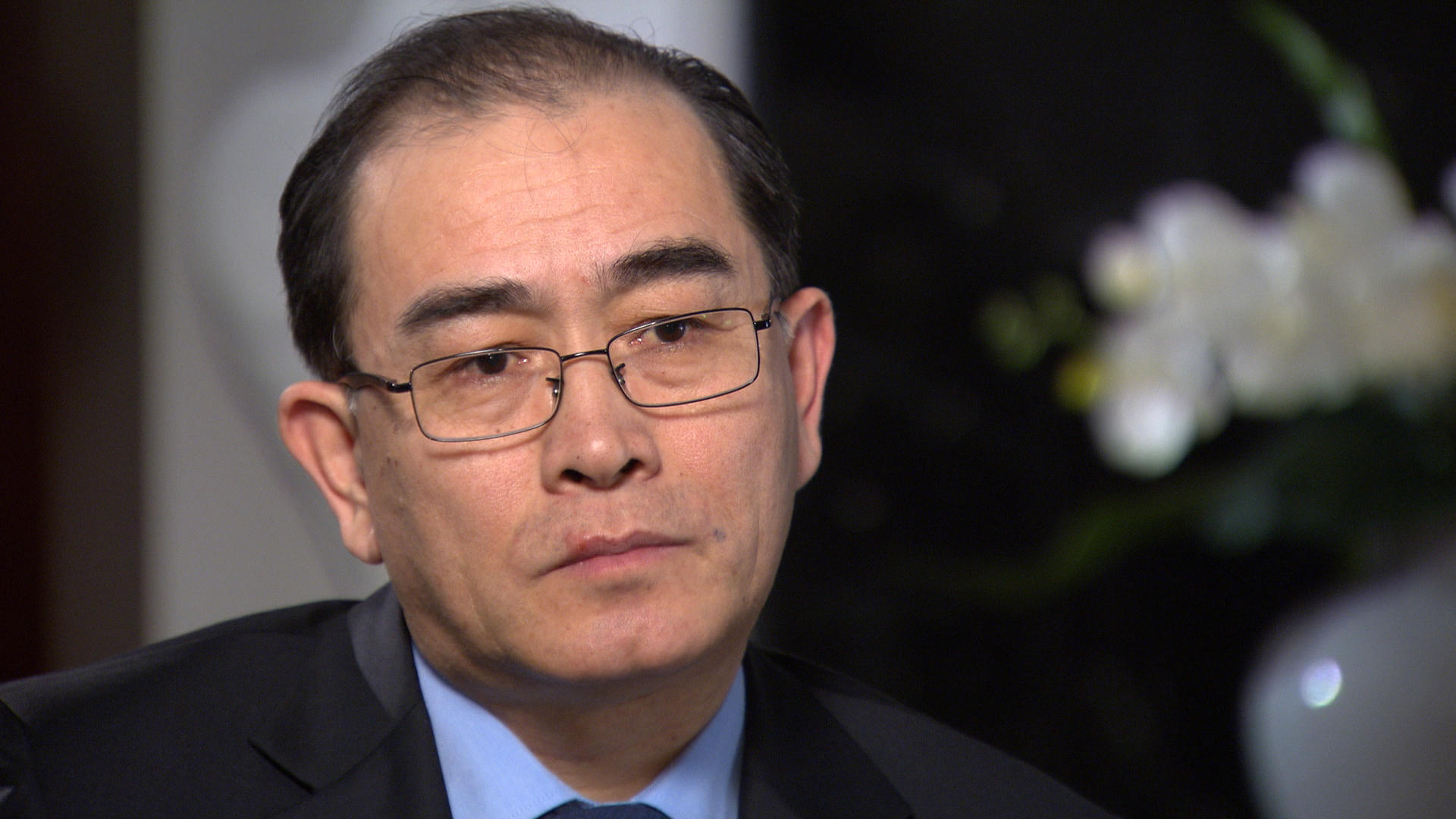 North Korea continues to test missile after missile, raising tensions with the United States. Kim Jong-un has promised to test an intercontinental ballistic missile. Such a weapon could eventually carry a nuclear warhead and threaten American cities. U.S. Defense Secretary Jim Mattis called that possibility and the missiles Kim has aimed at South Korea quote "a clear and present danger" to the world.

As we first reported in February, we went to South Korea and saw how tense the situation has become. We got two important perspectives from the commander of the 28,000 American troops there, and the highest-ranking North Korean to defect in decades. He told us Kim's missile program is part of an obsession with the survival of his regime.

Thae Yong-ho: I've been in Seoul for six months and to be honest I was never public until now.

"In order to prevent more possible defections from North Korea, I think Kim Jong-un will do anything." Thae Yong-ho

We went for an evening out in Seoul with Thae Yong-ho. He was North Korea's deputy ambassador in London before he defected in August. A defection by someone of his rank is extremely rare. This was the first time he had walked about in public. Just off camera, six bodyguards watched his every move as we made our way down one of the busiest shopping streets in Asia. North Korea has assassinated defectors in Seoul.

Thae Yong-ho: In order to prevent more possible defections from North Korea, I think Kim Jong-un will do anything.

Bill Whitaker: Even kill you?

Thae Yong-ho: Of course. Why not?

The man who could order an assassination is Kim Jong-un. The dictator is the third member of the Kim family to rule North Korea. They have controlled the impoverished country with an iron-clad fist for 70 years. This missile test was in February. Kim devotes a quarter of his country's economy to weapons like this and his million-man army – despite widespread food shortages.

Thae Yong-ho: Kim Jong-un strongly believes that once he possesses ICBM, then he can easily scare off America.

Bill Whitaker: Right now, how dangerous is North Korea to the stability of South Korea and as a threat to the United States?

Thae Yong-ho: Kim Jong-un's capability to wreak harm, not only to America but also South Korea and the world, should not be underestimated.

During his five years in power Kim Jong-un has expanded North Korea's nuclear arsenal – despite international sanctions that have brought his country's economy to its knees. Electricity is scarce. From space – North Korea is a black hole. That's it wedged between the shining lights of South Korea and China to the north. Thae said he was living a comfortable life here at the North Korean embassy in London before he fled with his wife and two grown sons. His job in London was to spread North Korean propaganda and report back on colleagues.

Bill Whitaker: You all live together under one roof?

Bill Whitaker: So you could keep an eye on each other?

But Thae said he lost all faith in the regime when Kim Jong-un killed his own uncle in 2013 and executed dozens of perceived enemies – including diplomats.

"All North Korean diplomats are forced to leave one of their children back in Pyongyang as a hostage." Thae Yong-ho

Bill Whitaker: I have seen tape of you giving speeches in London. You're very convincing. You seem to be a true believer yourself.

Thae Yong-ho: If I show any sign of hesitation, then I would be, you know, sent to—

Bill Whitaker: What would happen to you?

Thae Yong-ho: I would be sent to prison camps. So my whole family's life will be jeopardized.

Thae said there was one big obstacle to his defection.

Thae Yong-ho: All North Korean diplomats are forced to leave one of their children back in Pyongyang as a hostage.

Bill Whitaker: As a hostage?

His break came when that policy unexpectedly changed and Thae's oldest son was allowed to join the family in London. They all agreed to defect. He would not give us the details about his escape and who helped. But we know he was kept in a safe house by South Korean intelligence agents and questioned for more than three months. He said it was too dangerous for us to meet his family.

Bill Whitaker: Now, I've been talking to you for a couple of days now. You come from a secretive place.

Bill Whitaker: But I think you still have lots of secrets.

Bill Whitaker: How do we know that what he is telling us is the truth, not just self-serving?

Chung Min Lee: You know, when a defector makes a decision to jump ship, he is doing it at a huge cost, his co-workers or relatives, in-laws will be purged or killed.

Chung Min Lee was South Korea's ambassador for national security until last year. He said looks here can be deceiving --- the risk of war today is exceptionally high.

Bill Whitaker: I think most Americans right now would sort of see this as a holdover from the Cold War. But it seems to be quite hot when you're here.

Chung Min Lee: That's right. This is the only place on the entire planet where you have nearly a million forces on both sides standing, ready to fight a war in basically a nanosecond. And who is there right in the middle of this? It's basically the U.S. forces.

Lee helped shape Seoul's policy toward North Korea. He went with us to Panmunjom -- the village in the two-and-a-half mile wide demilitarized zone that separates North and South Korea. As we got closer, Seoul's sprawl gave way to military checkpoints. The agreement that suspended the Korean War was signed here. But there's still no peace treaty. The war began when the Communist North invaded in 1950 – 34,000 Americans were killed in what amounted to a stalemate.

Chung Min Lee: So this is the longest war on paper since World War II. So we are still technically in a state of war.

Today, both sides still stare each other down. That's North Korea right there, that building just 100 yards away. We were told to avoid sudden movements that could be interpreted as threatening. It wasn't long before North Korean soldiers took an interest in all the activity. So we went inside a negotiation hut that straddles the border.

Bill Whitaker: What is right behind the door?

Chung Min Lee: Right behind the door is, basically from there, this is North Korea. Once you go out, that's it. We have no jurisdiction on that side of the door.

Bill Whitaker: So if I were to walk out that door--

"Right behind the door is, basically from there, this is North Korea. Once you go out, that's it. We have no jurisdiction on that side of the door." Chung Min Lee

Bill Whitaker: I'm in the hands of North Korea?

Bill Whitaker: Let's stay on this side.

It was all surreal. This part of the DMZ closest to Seoul had the feel of a Cold-War theme park -- complete with a fake village on the North Korean side built to impress the South. And in case you missed the point, loudspeakers blared propaganda -- marshal songs praising Kim Jong-un. A few miles away -- tourists crowded an observation deck, snapping photos with troops, cardboard cut-outs --- and the real ones. What the visitors could not see on the other side of those mountains are 10,000 artillery pieces the North Korean military has aimed at Seoul. All of which could reach the 28 million people in and around the South Korean capital. U.S war planners estimate 500,000 people could be killed in a second Korean War.

Bill Whitaker: Is there any other metropolitan area on earth this vulnerable?

James Slife: Certainly nothing that approaches Seoul in terms of the size, the density of the population. There's nothing like it.

U.S. Air Force General James Slife flew with us over the city. It's just 30 miles from the DMZ. We landed at Osan Air Base where Korean airmen and their American colleagues monitor all activity north of the DMZ. For security, they shut off the giant video displays right before we came in. This facility is among the first to detect North Korean missile launches.

Bill Whitaker: You're, like, on a war footing all the time.

James Slife: That's right. This is truly one of those places where the best way to prevent a war is being ready for a war.

The North's latest missile tests used a new type of solid fuel engine and were fired from mobile launchers, making them quick to deploy and difficult for U.S. satellites to detect in real time.

We wanted to talk to the general who leads U.S. forces in Korea and would command Korean troops in the event of a war. He asked to meet us at Guard Post Four. It's a citadel on critical high ground at the end of a road lined with land mines. We were the first American news crew allowed in. This was no Cold-War theme park. Body armor was required and artillery was on standby in the event we came under fire. General Vincent Brooks has commanded U.S. forces fighting in Iraq and Afghanistan.

Bill Whitaker: I don't think people at home know how tense this line is.

Vincent Brooks: What it takes to go from the condition we're in at this moment to hostilities again is literally the matter of a decision on North Korea's side to say fire. And on top of this we have the missile capability that's been developed, over 120 missiles fired just in the time of Kim Jong-un alone.

"If North Korea uses nuclear weapons, it will be met with an effective and overwhelming response." General Vincent Brooks

Bill Whitaker: So now they're talking about ICBMs that might be able to reach the West Coast of the United States. How do you stop them from taking that next step?

Bill Whitaker: His country is poor. His people are starving. What is it that he wants?

Kim Jung-un is now recognized as a global threat. U.S. intelligence estimates he has at least 10 nuclear weapons. If the U.S. decided it had no choice but to launch a pre-emptive strike on an ICBM test site, it could trigger the unthinkable.

Vincent Brooks: If North Korea uses nuclear weapons, it will be met with an effective and overwhelming response. Now they can take it to the bank. We make that same point to our allies and partners, like the Republic of Korea and like Japan.

Vincent Brooks: Whatever overwhelms ya.

That warning rang in our ears as we returned to Seoul and met one last time with defector Thae Yong-ho. We asked about his brother and sister, still in North Korea.

Bill Whitaker: What do you think has happened to them?

Thae Yong-ho: They will be sent to prison camps. That is what I am absolutely sure.

Bill Whitaker: Does that weigh on you?

Thae Yong-ho: Of course. Yes. I cannot get rid of that kind of nightmare after night of seeing my brother and sister in prison camps.

Thae told us he believes he can help topple the North Korean regime by encouraging other defections and speaking out. During the campaign, President Trump called Kim Jong-un a maniac. His language has been much more careful since the latest missile tests.