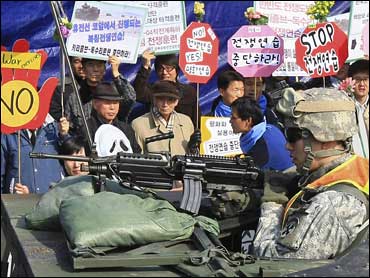 North Korea put its armed forces on standby for war Monday and threatened retaliation against anyone seeking to stop the regime from launching a satellite into space in the latest barrage of threats from the communist regime.

The warning came as U.S. and South Korean troops kicked off their annual war games across the South, exercises the North has condemned as preparation for an invasion. Pyongyang last week threatened South Korean passenger planes flying near its airspace during the drills.

Analysts say the regime is trying to grab President Obama's attention as his administration formulates its North Korea policy.

The North also indicated it was pushing ahead with plans to fire a communications satellite into space, a provocative launch neighboring governments believe could be a cover for a missile test.

U.S. and Japanese officials have suggested they could shoot down a North Korean missile if necessary, further incensing Pyongyang.

"Shooting our satellite for peaceful purposes will precisely mean a war," the general staff of the North's military said in a statement carried Monday by the official Korean Central News Agency.

Any interception will draw "a just retaliatory strike operation not only against all the interceptor means involved but against the strongholds" of the U.S., Japan and South Korea, it said.

South Korea's Defense Ministry spokesman Won Tae-jae downplayed the threats as "rhetoric" but said the country's military was ready to deal with any contingencies.

Analysts say a satellite or missile launch could occur late this month or in early April when the North's new legislature, elected Sunday, is expected to convene its first session to confirm Kim Jong Il as leader.

(AP Photo/Ahn Young-joon)
Mr. Obama's new special envoy on Pyongyang, Stephen Bosworth (at left), met with South Korean officials Monday to discuss the tensions. Bosworth has urged Pyongyang to refrain from firing a satellite or missile, and to stop threatening its neighbors. He said Washington wants Pyongyang to defuse tensions through dialogue.

Ties between the two Koreas have plunged since South Korean President Lee Myung-bak took office a year ago halting aid unless the North fulfills an international promise to dismantle its nuclear program.

An angered North Korea suspended the reconciliation process and key joint projects with Seoul, and has stepped up the stream of belligerence toward the South.

On Monday, North Korea also cut off a military hot line with the South for the duration of the 12-day joint U.S.-South Korean military exercises, leaving the nations without any means of communication at time when even an accidental skirmish could develop into a full-blown battle.

The two Koreas have used the hot line to exchange information about the crossing of goods and people through the industrial North Korean border city of Kaesong. Its suspension halted traffic and stranded about 570 South Koreans working in Kaesong.

About 700 South Koreans who had planned to enter Kaesong on Monday were stranded on the South Korean side, the Unification Ministry said. Seoul urged Pyongyang to restore the line immediately.

The two Koreas technically remain in a state of war since their three-year conflict ended in a cease-fire, not a peace treaty, in 1953. Hundreds of thousands of troops are amassed on each side of the Demilitarized Zone separating the two Koreas, making the Korean border one of the world's most heavily armed.

The United States, which has 28,5000 troops in South Korea, hold military exercises with the South every year. Pyongyang routinely condemns them as rehearsals for invasion despite repeated assurances from Seoul and Washington that the drills are purely defensive.

The exercises, which will involve some 26,000 U.S. troops, an unspecified number of South Korean soldiers and a U.S. aircraft carrier, are "not tied in any way to any political or real world event," Gen. Walter Sharp, commander of the U.S. troops, said Monday.