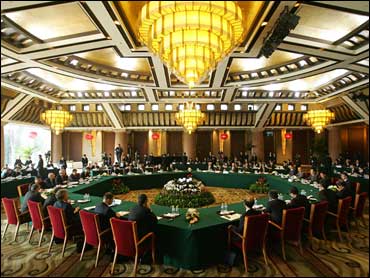 North Korea defiantly proclaimed itself a nuclear power Monday and demanded an end to sanctions before it disarms, while the U.S. said it was running out of patience with the communist regime at the first six-nation arms talks since its nuclear test.

The talks on the North's nuclear program resumed at a Chinese state guesthouse in Beijing after the North ended a 13-month boycott over U.S. financial restrictions. Prospects for progress were uncertain, as North Korea issued a list of preconditions before it would dismantle its atomic program.

"There's a lot of room in these talks, and maybe that's part of the problem, reports CBS News correspondent Barry Petersen. "There are so many agendas from the various countries — North and South Korea, the U.S., Japan, Russia, China — that it may be a little hard to get a total consensus despite all the best diplomatic efforts. But the fact is, North Korea really only wants to negotiate with one power, the United States."

Among the North's demands at the talks — involving China, Japan, Russia, the U.S. and the two Koreas — were the lifting of all U.N. sanctions and U.S. financial restrictions, along with being given a nuclear reactor for power generation and energy aid until it is built, according to a summary of opening speeches released by one of the delegations involved.

"Because Washington appears willing to lift some of the unilateral financial sanctions, there may be some headway," says CBS News foreign affairs analyst Pamela Falk, "but the real goal of getting North Korea to give up its nuclear program does not seem possible in this round of talks because representatives of Kim Jong-il have threatened an increase of nuclear testing if its laundry list of demands are not met."

But U.S. envoy Christopher Hill said sanctions would remain in effect until the North disarms, adding he hoped for initial steps this week on implementing a September 2005 denuclearization agreement "to demonstrate that the process indeed has legs and is moving forward."

In that agreement — the only one ever reached at the talks — the North pledged to abandon its nuclear program in exchange for security guarantees and aid.

"The supply of our patience may have exceeded the international demand for that patience, and we should be a little less patient and pick up the pace and work faster," Hill told reporters.

Hill said no bilateral meeting with the North Koreans will be scheduled until he consults with other delegations.

"The position of the North Korean delegation is wide apart from the rest of us and we cannot accept it," Japanese negotiator Kenichiro Sasae told reporters.

"We have finished the stage of commitment for commitment and now should follow the principle of action for action," Foreign Ministry spokesman Jiang Yu told reporters, echoing phrasing from the earlier agreement.

Jiang noted the parties have some "very pronounced differences."

"However, the more complicated and difficult the situation, the more we need to be patient," he said.

"We hope that with the concerted efforts of all parties, we will be able to produce positive results at this session," Chinese envoy Wu Dawei said at the talks' start.

In its opening comments, the North asserted it is a nuclear power and that the negotiations should be arms reduction talks — repeating its insistence that it be treated on equal footing with the U.S.

If its demands aren't met, the North said it would increase its nuclear deterrent, according to the summary. The U.S. offered in its opening comments to normalize relations with North Korea, but only after it halted its nuclear program.

"North Korea has listed the maximum demands it can make in its speech," a South Korean official said on condition of anonymity due to sensitivity of the talks, adding that the North was taking a "department store approach" in wanting everything on the table.

"Can the North be bought out? The answer seems to be yes, if the rest of the world is willing pay enough, for instance, an end to economic sanctions, diplomatic relations, and from the United States, some kind of a guarantee, indeed, some sort of peace treaty, acknowledging that North Korea is a sovereign state with the right to exist," reports Petersen.

South Korean nuclear negotiator Chun Yung-woo proposed that steps be taken within a few months to implement the agreement.

North Korea agreed to return to the six-nation negotiations shortly after its Oct. 9 nuclear test, saying it wanted to discuss U.S. financial restrictions against a bank where the North held accounts for its alleged complicity in counterfeiting U.S. currency and money laundering.

Separate U.S.-North Korean meetings on the financial issue expected to begin Monday were delayed by a day because the North Korean delegation responsible for that hadn't yet arrived in Beijing.

The arms talks have been plagued by delays and discord since they began in August 2003.

"In a sense, the Bush administration has itself to blame for some of the problems with North Korea," says Petersen. "It was the president who personally called them a member of the 'Axis of Evil,' and the North also has seen what happened in Iraq, with the Bush administration theory of 'regime change.' The North's elusive leader Kim Jong-il does not want to face the same fate as Saddam Hussein."

But North Korea's nuclear test of a device believed to be relatively small in explosive power has apparently hardened the will of other countries — particularly key benefactor China — to persuade the North to disarm.

Beijing agreed to a unanimous U.N. Security Council resolution sanctioning North Korea for its nuclear test, and brought the North and U.S. together a few weeks after the underground detonation to agree to a resumption of the arms talks.

"There is a sense that North Korea is trying to develop a small warhead-size nuclear device, something it could put on top of a missile that it's also developing, that could at some point reach America's West Coast," reports . "That would give the North an amazing bargaining chip. That is why the rest of the world, especially the United States, is trying to try to get these talks moving, and moving now."