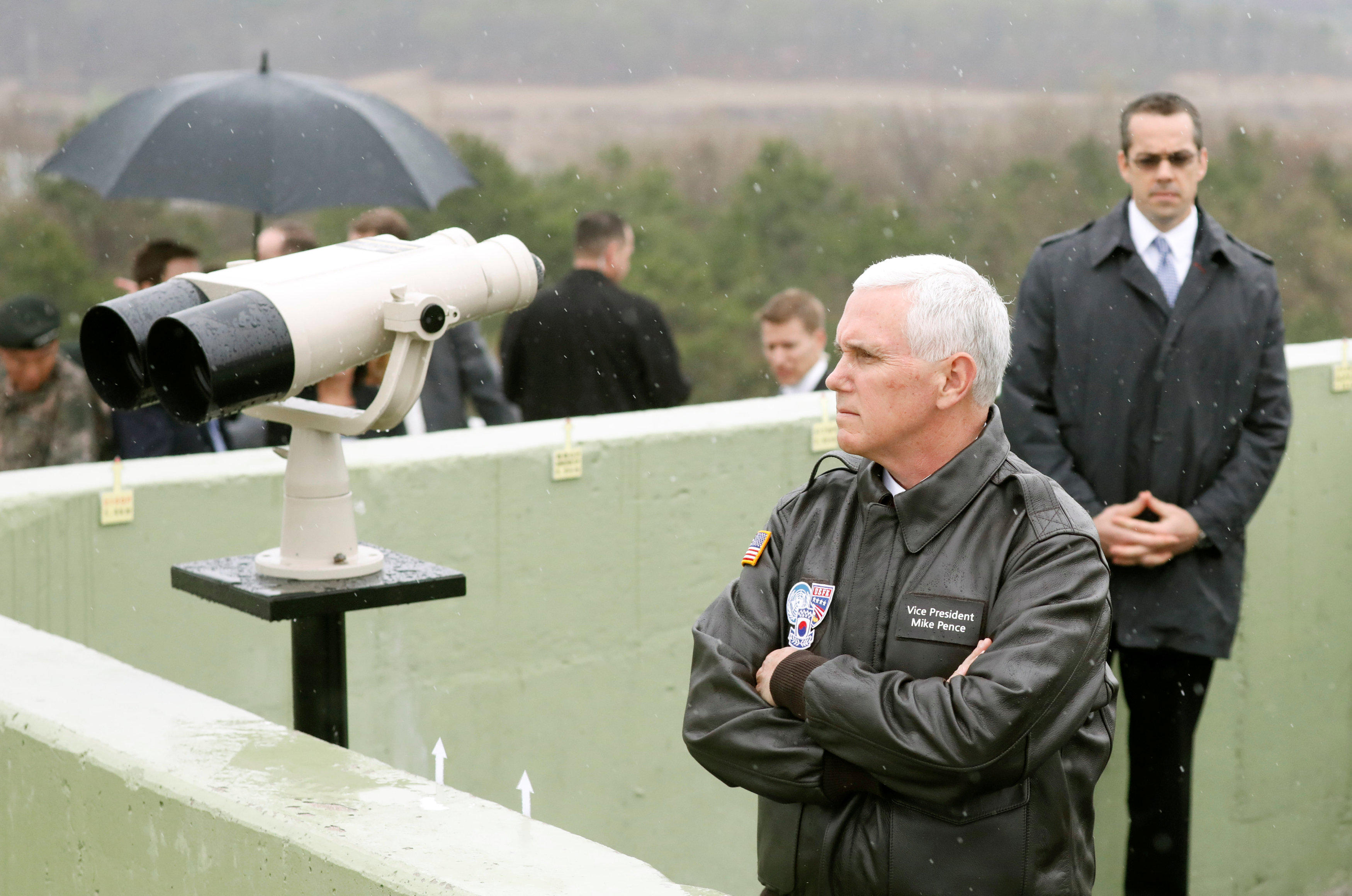 PANMUNJOM, South Korea -- Vice President Mike Pence declared Monday the “era of strategic patience is over” with North Korea, expressing impatience with the unwillingness of the regime to move toward ridding itself of nuclear weapons and ballistic missiles.

Pence told reporters near the Demilitarized Zone separating North and South Korea that President Trump is hopeful that China will use its “extraordinary levers” to pressure the North to abandon its weapons.

Pence, who has called the North’s failed missile test a day earlier “a provocation,” said the U.S. and its allies will achieve its objectives through “peaceable means or ultimately by whatever means are necessary” to protect South Korea and stabilize the region.

Later, at a joint news conference in Seoul with acting South Korean President Hwang Kyo-ahn, Pence reiterated that the U.S. commitment to South Korea is “iron-clad and immutable.”

During his visit to a military base near the DMZ, Camp Bonifas, Pence was briefed by military leaders and met with American troops stationed there. The joint U.S.-South Korean military camp is just outside the DMZ. He later stood a few meters from the military demarcation line outside Freedom House, gazing at two North Korean soldiers across the border and then a deforested stretch of North Korea from a lookout post in the hillside.

The DMZ, notes the Reuters news agency, is “a heavily mined, 2.5-mile-wide strip of land lined with barbed wire running across the Korean peninsula, with soldiers on both sides in a continual eyeball-to-eyeball standoff.”

His visit, full of Cold War symbolism, and his remarks to reporters come amid increasing tensions and heated rhetoric on the Korean Peninsula.

As CBS News correspondent Adriana Diaz reports, Kim Jong Un looked on for hours as weapon after weapon rolled by in a weekend parade honoring his grandfather Kim Il Sung. But when it came time to test one of those medium-range ballistic missiles on Sunday, it failed in spectacular fashion; exploding about five seconds after lift-off.

In recent years, Diaz says North Korea has successfully tested an expanding arsenal of missiles, but an increasing number have failed.

Though North Korea did not conduct a new nuclear test this weekend -- which had been seen as a distinct possibility given activity at a primary testing site -- a White House official said that had it happened, the U.S. would have taken quote “other actions.”

And as Diaz notes, the 85th anniversary of North Korea’s military is next week, giving the North another high-profile opportunity to conduct a nuclear test.

While the North did not conduct a nuclear test, the specter of a potential escalated U.S. response trailed Pence as he began a 10-day trip to Asia.

Pointing to the quarter-century since North Korea first obtained nuclear weapons, the vice president said a period of patience followed.

“But the era of strategic patience is over,” Pence said. “President Trump has made it clear that the patience of the United States and our allies in this region has run out and we want to see change. We want to see North Korea abandon its reckless path of the development of nuclear weapons, and also its continual use and testing of ballistic missiles is unacceptable.”

Later Monday, Pence reiterated in a joint statement alongside South Korean Acting President Hwang Kyo-ahn that “all options are on the table” to deal with threat and said any use of nuclear weapons by Pyongyang would be met with “an overwhelming and effective response.” He said the American commitment to South Korea is “iron-clad and immutable.”

Pointing to Trump’s recent military actions in Syria and Afghanistan, Pence said, “North Korea would do well not to test his resolve,” or the U.S. armed forces in the region.

Mr. Trump himself asserted on Sunday that China was working with the United States on “the North Korea problem.” His national security adviser, H.R. McMaster, said the U.S. would rely on its allies as well as on Chinese leadership to resolve the issues with North Korea.

McMaster cited Mr. Trump’s recent decision to order missile strikes in Syria after a chemical attack blamed on the Assad government as a sign that the president “is clearly comfortable making tough decisions.” But at the same time, McMaster said on “This Week” on ABC, “it’s time for us to undertake all actions we can, short of a military option, to try to resolve this peacefully.”

The bottom line, McMaster said, is to stop the North’s weapons development and make the Korean Peninsula nuclear-free. “It’s clear that the president is determined not to allow this kind of capability to threaten the United States. And our president will take action that is in the best interest of the American people,” he said.

After a two-month policy review, officials settled on a policy dubbed “maximum pressure and engagement,” U.S. officials said Friday. The administration’s immediate emphasis, the officials said, will be on increasing pressure on Pyongyang with the help of Beijing.

The officials weren’t authorized to speak publicly on the results of the policy review and requested anonymity.

A North Korean missile exploded during launch on Sunday, U.S. and South Korean officials said. The high-profile failure came as the North tried to showcase its nuclear and missile capabilities around the birth anniversary of the North’s late founder and as a U.S. aircraft carrier neared the Korean Peninsula.

A White House foreign policy adviser traveling with Pence said no U.S. response to the missile launch was expected because there was no need for the U.S. to reinforce the failure. The adviser spoke on condition of anonymity to discuss the administration’s initial understanding of the launch.

Mr. Trump, spending the Easter weekend at his Florida resort, reinforced his commitment to the armed forces under his control. “Our military is building and is rapidly becoming stronger than ever before,” he tweeted.

More directly on North Korea, the president returned to a theme of placing much onus on China for reining in the North. Last week, he said he would not declare China a currency manipulator, pulling back from a campaign promise, as he looks for help from Beijing, which is the North’s dominant trade partner.

“Why would I call China a currency manipulator when they are working with us on the North Korean problem? We will see what happens!” Mr. Trump tweeted Sunday.

But a report by Bloomberg on Monday raises questions about Beijing’s role as the chief agent for bringing about change in the North Korean regime’s behavior. It says recent attempts by senior Chinese diplomats to contact counterparts in Pyongyang have gone ignored. The article cited anonymous officials as saying the rebuffs came within the last two weeks.

Another challenge to the policy of pressuring China to bring North Korea into line is the lingering dispute between Washington and Beijing over the U.S. missile defense system known as THAAD, which is being deployed in South Korea.

Acting President Hwang Kyo-Ahn said alongside Pence on Monday that the U.S. and South Korea had agreed to “strengthen the readiness posture” of their alliance “through a swift deployment of THAAD.”

This is Pence’s first trip to the region, and into the tense environment, since he took office in January. After arriving in the South Korean capital, he placed a wreath at Seoul National Cemetery, then worshipped with military personnel at an Easter church service at the U.S. Army Garrison Yongsan.