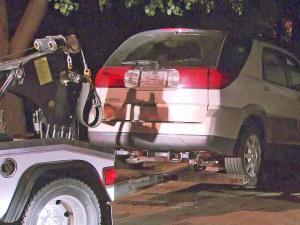 DURHAM, N.C. -- A North Carolina man tried to drown his three children in a pond at an apartment complex and then begged a 911 dispatcher to send help, sobbing as he explained that authorities were trying to take them away, according to emergency calls released Monday.

Alan Tysheen Eugene Lassiter, 29, is charged with three counts of attempted murder and is jailed on a bond of $2 million, according to the Durham County Jail. His 3- and 5-year-old daughters who had to be rescued from the water remain hospitalized following the Sunday night incident. His 7-year-old son escaped and ran for help, police said.

"Please send an ambulance. My daughters are in the lake, drowning. Both of my young daughters," the distraught man tells a dispatcher as he tries to explain where he is so police can come help. Later in the call, he tells a bystander: "I just drowned my two daughters in the lake back there."

Lassiter, who alternates between expletive-laden rage and distraught sobs throughout the call, blames officials for trying to take away his children as he dealt with a personal problem.

"All I was trying to do was get help," the caller said. "Instead they turned their back on me. The whole system, and tried to take my kids."

It is not immediately clear whether Lassiter has a lawyer. The person who lived at the listed address for Lassiter in Raleigh said she did not know him and phone calls to family members had not been immediately returned.

Durham Police Chief Jose Lopez said he did not know whether the family had been the subject of earlier calls for intervention by police or social service workers.

It's not clear why Lassiter and his children were at the apartment complex on Sunday night, Durham Police Chief Jose Lopez said, and there is no evidence the family lived there. In the 911 call, Lassiter says his wife lives in nearby Raleigh and will be in shock.

It also is not clear whether the girls were thrown or pushed into the pond before they were rescued by an off-duty sheriff's deputy who performed CPR until an ambulance arrived, Lopez said.