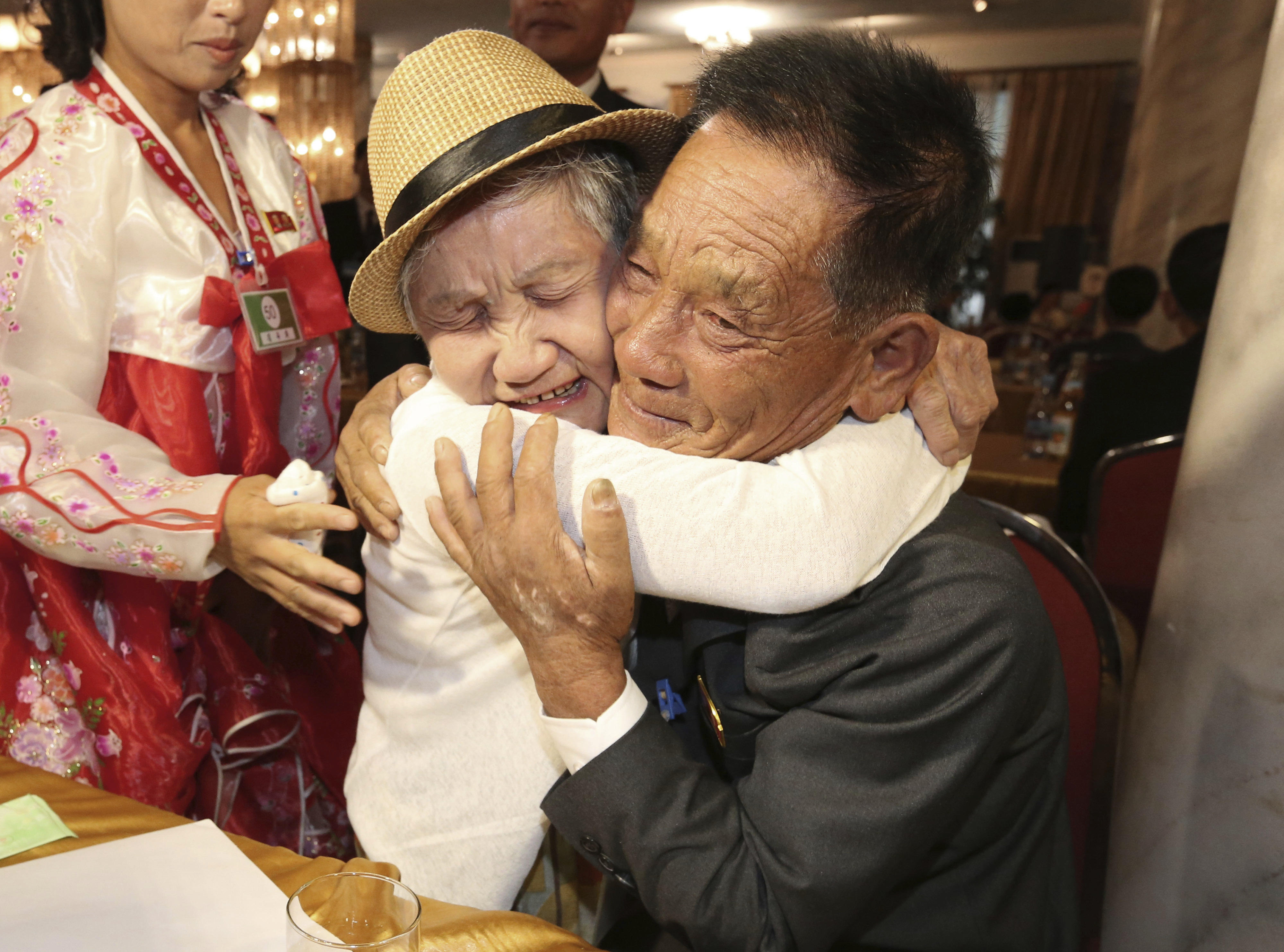 SEOUL, South Korea — The 92-year-old South Korean woman wept and stroked the wrinkled cheeks of her 71-year-old North Korean son on Monday. It was their first meeting since they were driven apart during the turmoil of the 1950-53 Korean War.

"How many children do you have? Do you have a son?" Lee Keum-seom asked her son Ri Sang Chol during their long-awaited encounter at the North's Diamond Mountain resort.

The emotional reunion came after dozens of elderly South Koreans crossed the heavily fortified border into North Korea to meet temporarily with their relatives. The weeklong event, the first of its kind in nearly three years, was arranged as the rival Koreas boost reconciliation efforts amid a diplomatic push to resolve a standoff over North Korea's nuclear weapons program.

Hugging the woman he'd last seen when he was 4, Ri showed his mother a photo of her late husband, who had stayed behind in North Korea with him after being separated from his wife while fleeing south. "Mother, this is how my father looked," Ri said.

Before leaving for North Korea, Lee said she wanted to ask her son "how he grew up without his mom and how his father raised him."

Most of the participants in the reunions are in their 70s or older and are eager to see their loved ones once more before they die. Most have had no word on whether their relatives are still alive because they are not allowed to visit each other across the border or even exchange letters, phone calls or email.

"How are you so old?" Kim Dal-in, 92, asked his sister, Yu Dok, Reuters news agency reports. "I've lived this long to meet you," the 85-year-old said as she wiped away tears.

About 90 elderly South Koreans, accompanied by their family members, will have three days of meetings with their North Korean relatives before returning to the South on Wednesday. A separate round of reunions from Friday to Sunday will involve more than 300 other South Koreans, according to Seoul's Unification Ministry.

During Monday's meeting, many elderly Koreans held each other's hands and wiped away tears with handkerchiefs while asking how their relatives had lived. They showed photos of family members who couldn't come to their meetings.

Han Shin-ja, a 99-year-old South Korean woman, was at a loss for words after she reunited with her two North Korean daughters, both in their early 70s. Not knowing their separation would be permanent, she left them behind in the North during the war while fleeing south with her third and youngest daughter.

She could only say "Ah" and "When I fled..." before choking up with tears.

Kim Sun Ok, an 81-year-old North Korean woman, said she found that she and her 88-year-old brother from South Korea resembled each other a great deal. "Brother, it would be really good if Korean unification comes. Let's live together even at least one minute after unification before we die," the woman said tearfully.

Before this week's reunions, nearly 20,000 people had participated in 20 rounds of face-to-face reunions since 2000. Another 3,700 exchanged video messages with their North Korean relatives. None have had a second chance to see or talk with their relatives.

Moon Hyun-sook, 91, said she gathered clothes, cosmetics and medicine to give to her two sisters, Reuters reports. "Whenever I saw pretty clothes, I always thought how cute they would look in them," she said.

During the three years since the reunions were last held, North Korea tested three nuclear weapons and multiple missiles that demonstrated they potentially could strike the continental United States.

North Korea has shifted to diplomacy in recent months. Leader Kim Jong Un and South Korean President Moon Jae-in, a son of North Korean war refugees, agreed to resume the reunions during the first of their two summits this year in April.

South Korea sees the separated families as the largest humanitarian issue created by the war, which killed and injured millions and cemented the division of the Korean Peninsula into the North and South. The Unification Ministry estimates there are currently about 600,000 to 700,000 South Koreans with immediate or extended relatives in North Korea. More than 75,000 of the 132,000 South Koreans who have applied to participate in reunions have died, according to a ministry record.

South Korean President Moon Jae-in on Monday reiterated that time is running out to expand the reunion program, saying it would be a "shameful thing" for both Koreas to see many elderly people dying without even finding out whether their loved ones are still alive.

Moon attended a 2004 reunion to meet his aunt. "As a separated family member, I deeply share their sorrow and pitifulness," he said during a meeting with his aides.

North Korea is reluctant to accept calls for more reunions. Analysts say it sees the reunions as an important bargaining chip and believes more reunions would give its people a better awareness of the outside world. While South Korea uses a computerized lottery to pick participants for the reunions, North Korea is believed to choose based on loyalty to its authoritarian leadership.