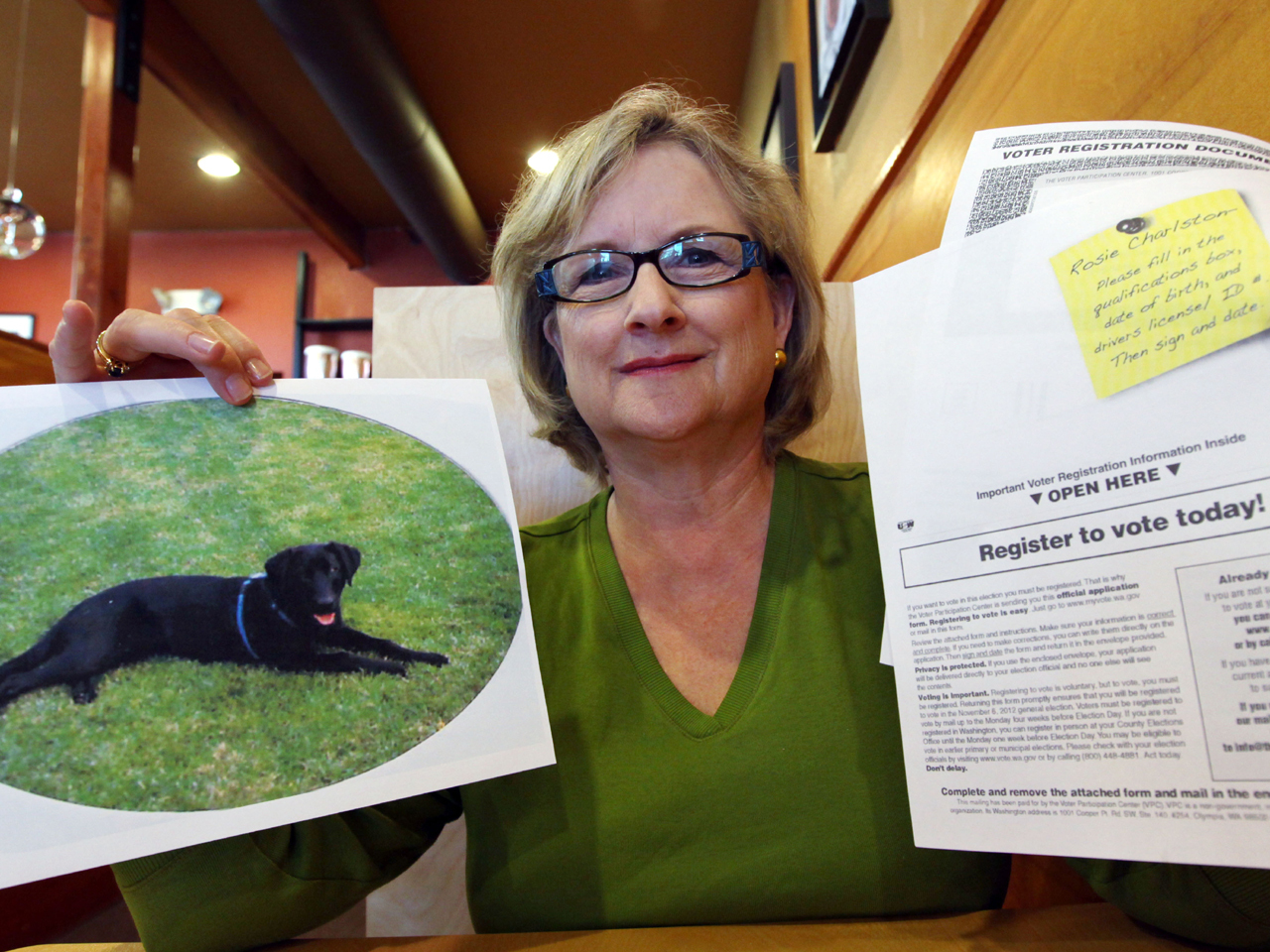 (AP) OLYMPIA, Wash. - The voter registration form arrived in the mail last month with some key information already filled in: Rosie Charlston's name was complete, as was her Seattle address.

A group called the Voter Participation Center has touted the distribution of some 5 million registration forms in recent weeks, targeting Democratic-leaning voting blocs such as unmarried women, African-Americans, Latinos and young adults.

But residents and election administrators around the country also have reported a series of bizarre and questionable mailings addressed to animals, dead people, noncitizens and people already registered to vote.

Brenda Charlston wasn't the only person to get documents for her pet: A Virginia man said similar documents arrived for his dead dog, Mozart, while a woman in the state got forms for her cat, Scampers.

"On a serious note, I think it's tampering with our voting system," Charlston said. "They're fishing for votes: That's how I view it."

Every presidential election cycle brings with it a variety of registration drives targeting people who typically are underrepresented at the polls, and Republicans have long seized on sloppy or questionable registrations as a sign of potential fraud on the part of Democrats.

It's an issue that is particularly sensitive this year GOP political leaders have used fears of fraud to successfully push laws across the country that could make voting more difficult by requiring voters to show identification. Democrats have fought the laws, arguing that they can disenfranchise citizens, minorities in particular.

The group at the root of the questionable mailings — the Voter Participation Center — acknowledges that the databases it uses to contact possible voters are imperfect because they are developed from commercially collected information. The group also says it expects people who receive misdirected mail to simply throw it away.

Several election officials said they believed the voter registration systems were secure enough to catch people who might improperly submit the misdirected documents.

But administrators in New Mexico, a potential swing state in the 2012 presidential race, warned that ineligible voters who complete the documents could make it onto the rolls.

New Mexico is one of two states in which noncitizens can qualify for a driver's license by simply proving residency — not necessarily legal residency — and state elections officials have no way of verifying the legal status of those who file registration documents.

Ken Ortiz, the chief of staff at the New Mexico secretary of state's office, said some noncitizens have contacted the state asking why they received the forms when they'd previously been told that they could not vote.

"We fear that some of these individuals who receive this mailing may feel that they are being encouraged to vote by our office or county government," Ortiz said.

The mailings appear official, arriving in privacy envelopes with the headline "VOTER REGISTRATION DOCUMENTS ENCLOSED." Some information is already completed on the voter registration papers, and recipients also get an envelope to send completed forms to local elections officials.

The Voter Participation Center works with a vendor that has access to multiple commercial databases that could include people who subscribe to magazines or junk mail using names of their pet, said Page Gardner, the group's president. She said the nonprofit tries its best to target only eligible and unregistered voters but that some other names inevitably get on the final list.

"Is it a perfect process? No," Gardner said. Ultimately, she said they rely on the integrity of people and the security of the system and notes that the same forms are available to anyone at county offices or on the Internet.

The Voter Participation Center says it is trying to increase participation among minorities, unmarried women and people under the age of 30, with Gardner saying that those groups have historically been underrepresented in the election process.

The group says it has helped register 1 million people since 2004 and some 300,000 people in the current election cycle.

The center conducted one mailing distribution last year and another earlier this year before its biggest mailing, which went out in June. It is planning one more for later this year.

Voter registration drives of all types can create a small subset of problems. An active voter, for example, may sign up again after encountering a registration drive at an event. Some registration workers at the community activist group ACORN were accused in past years of submitting false forms with names like Mickey Mouse — filings the group said were done by workers to increase their pay.

What makes the Voter Participation Center's work challenging is that the group is identifying voters based on data, instead of during in-person interactions. The mailings include pre-filled information that creates further confusion and concern, said Katie Blinn, a co-director of elections in Washington state.

Blinn said it appeared that many of the mailings were going to people who are already registered to vote. They have heard about a "handful" of pet-related forms in the state of the past few weeks and fielded calls from people wondering whether their registration was canceled.

Julie Anderson, the auditor in Pierce County, Wash., estimates that about two dozen residents have contacted the county about registration forms arriving for dead relatives.