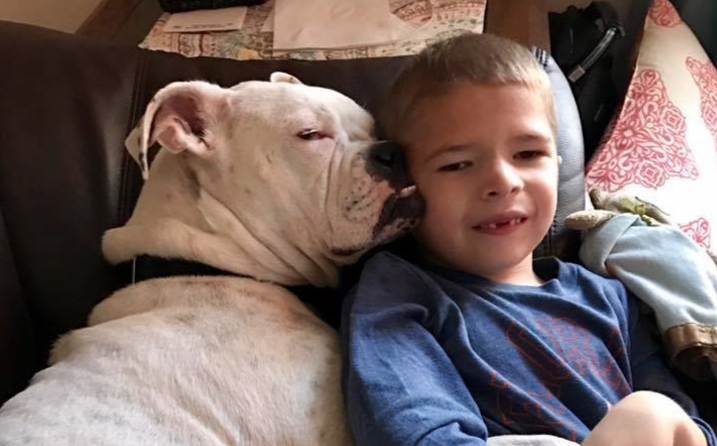 The pair are a “match made in heaven,” Connor’s mom, Brandi, told CBS News.

Connor was adopted at just 4 weeks old. And at the time, Brandi knew her son, who was born addicted to opiates, would have an uphill battle.

“Connor is severely delayed psychologically, physically and emotionally,” she  explained. “He is nonverbal and requires speech therapy. It is unknown whether he has the ability to speak with a limited vocabulary.”

Since he also has issues with gross motor skill, even Connor’s use of sign language is extremely difficult.

Since his adoption, Connor has been diagnosed with a chromosomal disorder called DiGeorge syndrome, damage to the brain and nervous system, and autism. Despite all of that, Brandi is determined to give Connor the life he deserves.

And that wouldn’t be possible without their rescue dog Ellie, a boxer.

The Cocoa, Florida family, which already had an 8-year-old boxer, was contacted by Jon Nowlin with the Coastal Boxer Rescue in Florida a week before Christmas. He explained to Brandi that a deaf boxer that only responds to sign language was available for adoption.

“I had a lightbulb go off immediately,” Brandi said. “To think that Connor can sign to her and actually communicate with her made my heart melt.”

Brandi and Connor met the dog the next day and “that was it.”

The affectionate pooch let Connor pet, kiss and hug her —and even shared some sloppy, wet kisses of her own.

“She was beyond gentle with him,” Brandi said. “Boxers are known to be great with kids, but there is something definitely special about Ellie.”

Brandi agreed to foster the pup to see how they would interact at home. Sure enough, her instincts were spot on.

The pair is inseparable. They play tug of war, run up and down the slide in the backyard and cuddle on the couch together. Finally, Connor has found a friend he can relate to.

“It warms my heart like nothing else,” Brandi said.

On Thursday, Brandi said she’s hoping to receive official papers to adopt Ellie and make her a permanent member of the family. But as far as she’s concerned, Ellie’s been one all along.