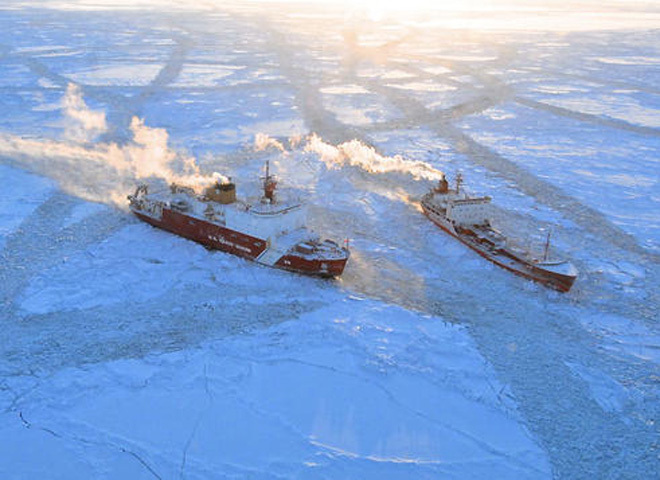 The offloading began near sundown, said Stacey Smith of Vitus Marine, the fuel supplier that arranged to have the Russian tanker Renda and its crew deliver the gasoline and diesel fuel. The process began after crews safety-tested two transfer hoses with pressurized air.

Earlier, crews laid the hoses along a stretch of Bering Sea ice. On Monday, they hooked the hoses to a pipeline that begins on a rock causeway 550 yards from the tanker, which is moored about half a mile (800 meters) offshore, said Jason Evans, board chairman of the Sitnasuak Native Corp.

Sitnasuak owns the local fuel company, Bonanza Fuel, and has been working closely with Vitus Marine. The pipeline leads to storage tanks in town.

Smith said the transfer began with one hose to see how the fuel flowed. She expected the second hose to begin flowing soon after.

State officials said the transfer must start during daylight, but can continue in darkness. Nome has just five hours of daylight this time of year.

The transfer could be finished within 36 hours if everything goes smoothly, but it could take as long as five days.

The Renda got into position Saturday night after a Coast Guard icebreaker cleared a path for it through hundreds of miles of a slow journey stalled by thick ice and strong ocean currents. Before the hoses could be laid out, the ice disturbed by the tanker's journey had to freeze again so workers could create some sort of roadway.

Smith said the effort is a third of the way into completion with the arrival of the Renda to Nome. Pumping the fuel from the tanker will be the second part. The third part will be the exiting through ice by the two ships.

"It's just been an absolutely grand collaboration by all parties involved," she said of the work accomplished so far.

The city of 3,500 didn't get its last pre-winter barge fuel delivery because of a massive November storm.

Without the Renda's delivery, Nome would run out of fuel by March or April, long before the next barge delivery is possible after one of the most severe Alaska winters in decades. Snow has piled up 10 feet (3 meters) or higher against the wood-sided buildings in Nome, a former gold rush town that is the final stop on the 1,150-mile (1,850-kilometer) Iditarod Trail Sled Dog Race.

The 370-foot tanker began its journey from Russia in mid-December, picking up diesel fuel in South Korea before heading to Dutch Harbor, Alaska, where it took on unleaded gasoline. It arrived late last week off Nome on Alaska's west coast more than 500 miles from Anchorage.

Personnel will walk the entire length of hosing every 30 minutes to check for leaks, Evans said. Each segment of hose has its own spill containment area, and extra absorbent boom will be on hand in case of a spill.

The Coast Guard is monitoring the effort, working with state, federal, local and tribal representatives, Chief Petty Officer Kip Wadlow said. The fuel participants had to submit a plan to state environmental regulators on how they intended to get the fuel off the Renda, he said.

"We want to make sure the fuel transfer from the Renda to the onshore storage facility is conducted in as safe a manner as possible," he said.