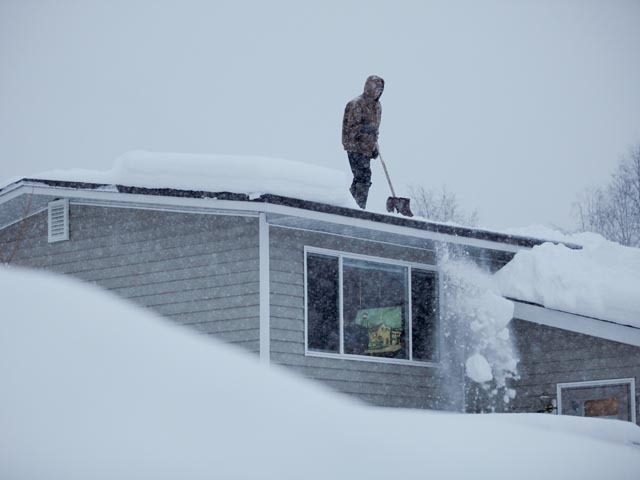 ANCHORAGE, Alaska - The worst winter anyone can remember in Alaska has piled snow so high people can't see out the windows, kept a tanker in ice-choked waters from delivering fuel on time and turned snow-packed roofs into sled runs.

While most of the nation has gone without much seasonal snow, the state already known for winter is buried in weather that has dumped more than twice as much snow as usual on its largest city, brought out the National Guard and put a run on snow shovels.

As a Russian tanker crawled toward the iced-in coastal community of Nome to bring in much-needed fuel, weather-weary Alaskans awoke Thursday to more of the white stuff and said enough was enough.

"The scary part is, we still have three more months to go," said Kathryn Hawkins, a veterinarian who lives in the coastal community of Valdez, about 100 miles southeast of Anchorage. "I look out and go, `Oh my gosh, where can it all go?"'

More than 26 feet of snow has fallen in Valdez since November. The 8-foot snow piles outside Hawkins' home are so high she can't see out the front or back of her house. Her 12-year-old son has been sliding off the roof into the yard.

In the nearby fishing community of Cordova, more than 172 inches of snow has fallen since November; snow began falling again after midnight Wednesday. The Alaskan National Guard was called in to help move the snow, and the city is running out of places to put it. Front-end loaders are hauling snow from dump piles to a snow-melting machine.

"That's our big issue, getting our snow dumps cleared for the next barrage of snow," Cordova spokesman Allen Marquette said.

Anchorage had 88 inches fall as of Thursday -- more than twice the average snowfall of 30.1 inches for the same time period. The weather service counts July 1 through the end of June as a snow season. More than 7 inches had fallen on Thursday and more than a foot was expected.

This year's total already broke the record 77.3 inches that fell during the same period in 1993-94. If it keeps up, Anchorage is on track to have the snowiest winter ever, surpassing the previous record of 132.8 inches in 1954-55.

Two atmospheric patterns are behind the state's massive snowfall: the Pacific weather pattern known as La Nina, and another called the Arctic Oscillation that has been strong this year, changing air patterns to the south and keeping the coldest winter air locked up in the Arctic.

Many of the lower 48 states have seen an unusually mild start to the winter. A storm dumped several inches of snow on northwestern Wisconsin and western Iowa before moving eastward and to start blanketing Milwaukee, St. Louis and Chicago, which was expected to get up to 8 inches by Friday morning.

In the ice-choked frozen waters of the Bering Sea, a Russian tanker loaded with 1.3 million gallons of fuel progressed steadily toward Nome, following the path being painstakingly plowed by a Coast Guard icebreaker. Thick ice, wind and unfavorable ocean currents had initially slowed the vessel down; but as of 2 p.m. Thursday the tanker and the icebreaker were 46 miles from Nome and likely to arrive Friday, said Coast Guard spokesman David Mosley.

The weather has put a strain on the state, which estimates the cost of paying for guard members in Cordova, heavy equipment, fuel and other costs at $775,000, said emergency management spokesman Jeremy Zidek.

In Anchorage, schools were open Thursday, but some school bus routes were canceled because of whiteout driving conditions.

"I think people were girding their loins for a long winter," said Anchorage police Lt. Dave Parker. He hasn't seen an upsurge of crime, but "by the end of March, there might be a few frustrated people."

In Cordova, shovel-makers were making emergency shipments to help out. There are plenty of standard shovels around town, but they're lacking a version with a 26-inch scoop that can push a cubic foot of snow or better at a time.

The new shovels cost about $50 each, and the city is paying for them with emergency funds.

"We have the National Guard right now using the standard shovel, and they're getting pretty trashed everyday -- not the shovels but the Guardsmen themselves," city spokesman Tim Joyce said.

The warmer temperatures -- about 35 degrees midday Wednesday -- brought another hazard to the Prince William Sound community of 2,200 people: avalanche danger.

The one road leading out of the city was closed, and the city warned people not to stand under the eaves of their houses to clear snow off the roof.

"There's a real high potential that if it does slide, they'd be buried," Joyce said.

The snow has damaged four commercial buildings and two homes and evacuated a 24-unit apartment complex in Cordova.

The current storm system is expected to be gone by Friday, but temperatures were expected to fall as low as 10 below zero this weekend, making it more difficult to shovel harder, packed snow.

If there's one fan of the snow in Valdez, it's 12-year-old Trevor, Kathryn Hawkins' son. School is out and the snow is piled so high on the roof that he turned it into a sledding hill.

"When it first started snowing, he said, `More, more, more snow,' and I'm like, `Will you stop it? We've had enough."' Hawkins said.

"And that was before all this came. He said, `I want to slide off the roof again,"' she said. "And now he can, to his heart's content."